Plus ‘Bridgerton’ steams up the chart and ‘American Song Contest’ debuts 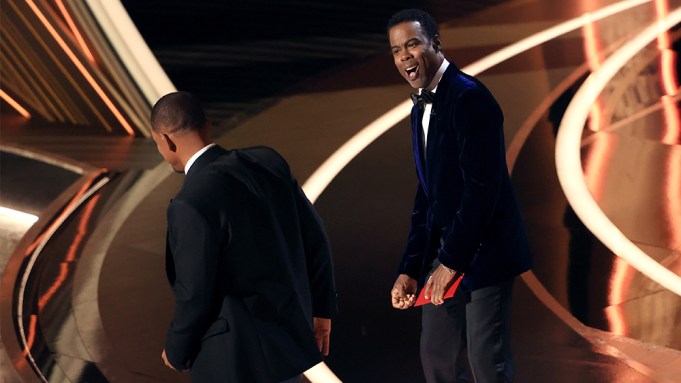 The 94th Academy Awards ignited Twitter and Variety’s Trending TV chart for the week of March 21 to 27, pulling in more engagements than any other TV series, award show or broadcast — including the Super Bowl — since the chart’s launch.

The Oscars received nearly 33 million engagements during its three-hour-plus Sunday night broadcast and accompanying red carpet pre-show. A lot of that engagement revolved around the latest fashions, the discourse about cutting eight of the craft category announcements from the live broadcast, and touching wins and acceptance speeches from best supporting actor Troy Kotsur ("CODA") and best supporting actress Ariana DeBose ("West Side Story").

Ariana DeBose's historic win and gorgeous speech had me in tears. 😭🏳️‍🌈#oscarspic.twitter.com/iEWQOwuK0l

The Oscar for Actor in a Supporting Role goes to Troy Kotsur for his spectacular performance in 'CODA.' Congratulations! #Oscars @troykotsur pic.twitter.com/pX3tZGzt2X

The biggest water-cooler-worthy moment of the night came during the third hour, however, when Will Smith walked onstage to slap presenter Chris Rock for joking about his wife, Jada Pinkett Smith, being cast in “G.I. Jane 2.” Smith then returned to his seat and yelled at Rock to leave his wife’s name out of his mouth. (Over the past couple of years, Pinkett Smith has openly spoken about her emotional battle with alopecia, and about losing her hair.)

Here's the moment Chris Rock made a "G.I. Jane 2" joke about Jada Pinkett Smith, prompting Will Smith to punch him and yell, "Leave my wife’s name out of your f--king mouth." #Oscars pic.twitter.com/kHTZXI6kuL

The slap was heard across Twitter as many weighed in to defend Smith or condemn the violent act. Considering the incident took place later in the evening, it will inevitably affect next week’s Trending chart as well, as the conversation continued well after the midnight cut-off and throughout the next day.

This week’s runner-up was also salacious, although it didn’t pull in anything near those staggering engagement numbers. “Bridgerton” rose this week to No. 2 following its second-season premiere on Friday on Netflix, generating more than 295,000 engagements. Users dissected the season’s slow burn in comparison to the first, the updated soundtrack, and the new romance between leads Jonathan Bailey and Simone Ashley, among other topics.

If stares could speak, we would have an entire series of novels. #Bridgerton Season 2 is now streaming only on Netflix. pic.twitter.com/AL02alss7U

#Bridgerton season 2 is so goddamn glorious! Kate & Anthony's enemies-to-lovers trope is *chef's kiss*. The slow burn. The angst. The looks of longing. The banters. The "you vex me" & "I hate you". The "you are the bane of my existence". My god, beautiful. Just beautiful. pic.twitter.com/0Micbgq9A9

In third place was the Marvel series “Moon Knight” with nearly 192,000 engagements. The show has been a constant player on the Trending chart since the first trailer dropped. However, this week, fans eagerly shared new interviews with the cast, and promotional material from Disney and the show’s account ahead of Wednesday’s debut.

The Friday debut of “Pachinko” on Apple TV Plus also resonated with Twitter this week, earning the show 109,000 engagements and catapulting the series into the fourth spot. Fans immediately were drawn into the sweeping landscape, compelling characters, and unique opening, marking a strong start for the multi-generational saga based on the novel by Min Jin Lee.

even Hansu realized the cruelty of his own words. #Pachinko #PachinkoEp3 #파친코 pic.twitter.com/6M8Iki8fwQ

Rounding out this week’s Top 5 was a new installment of “Outlander” on Starz with 97,000 engagements. The young Ian (John Bell)-focused episode finally revealed what happened to the fan-favorite character during his time with the Mohawk tribe and pulled on viewers’ heart strings (yet again).

In sixth place was the debut of “American Song Contest,” which yielded 66,000 engagements during its March 21 premiere on NBC. The U.S. adaptation of Eurovision is designed to encourage social media interaction in the first place (votes are collected via TikTok), while viewers naturally want to chat up their own state representatives as the competition progresses. Kelly Clarkson, who co-hosts the competition alongside Snoop Dogg, also promoted the show online, helping to boost overall engagement.

Tune in tonight, y'all! #AmericanSongContest begins LIVE at 8/7c on @NBC. pic.twitter.com/mvxJovXceu

A new episode of “The Flash” on The CW came in seventh place with 57,000 engagements this week, while the upcoming April 22 debut of Apple TV Plus’ Magic Johnson docuseries, “They Call Me Magic,” racked up 47,000 engagements in eighth place. Once again, “Peacemaker” also made the list, this time in ninth place with 35,000 engagements. At this point, its continued presence following the first-season finale in February is mainly a result of users who continue to post and share their own videos of the opening sequence dance number.