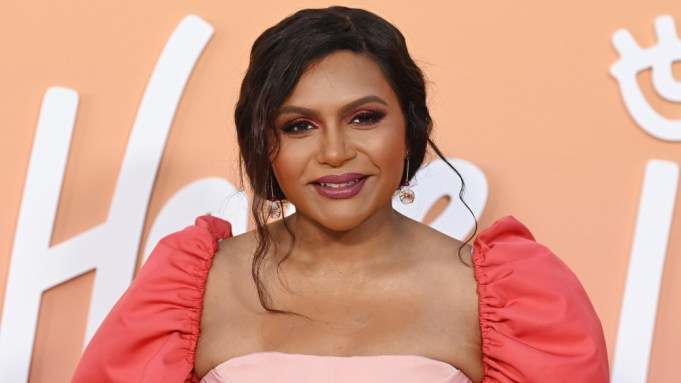 “Never Have I Ever” executive producer Mindy Kaling, showrunner Lang Fisher and the stars of the Netflix coming-of-age dramedy celebrated the debut of its third season at the Westwood Village Theater in Los Angeles on Thursday night.

The show follows Indian American teenager Devi Vishwakumar (Maitreyi Ramakrishnan) as she copes with the sudden death of her father while also navigating complicated relationships with her family members, romantic interests and peers at her high school in L.A.’s Sherman Oaks neighborhood.

The cast and crew had not previously been able to attend an in-person premiere for the hit series, which debuted shortly after the onset of the COVID-19 pandemic. The excitement was palpable as hundreds of fans lined the streets around the theater and cheered on the arrival of the stars.

“I feel like I’m at the Oscars,” Kaling told Variety. “This is really incredible. And especially for these kids. When they shot the show, it was this big hit and they never got to be around people and take a victory lap. So, it seemed kind of theoretical. They did the show and they saw the effect online and then we just went back and shot some more.”

Kaling explained that fans can expect more of the show’s mixture of comedy, romance and drama as the teenage characters approach adulthood. “We try to pack in a lot in each season,” she said. “There’s emotional things that we trying to showcase, but also it still needs to be a funny show. I feel like you turn on TV and every comedy is kind of depressing. And we just wanted to do a show that brought joy to people’s lives. But there’s serious things like grief, and that’s important for us to write about, and growing up and moving out of your house.”

“Never Have I Ever” also marks the acting debut of Reese Witherspoon and Ryan Phillippe’s son, Deacon Phillippe. Phillippe plays Parker, a friend of Devi’s new love interest Des (Anirudh Pisharody) and a member of her school’s rival debate team.

Kaling said that she cast Phillippe after her close friend Witherspoon told her that he had an interest in acting. She said, “We were breaking the season and there was this role that seemed like it would be perfect for Deacon.”

She continued, “He’s obviously so talented and he’s great-looking, and we just thought he would be great and he was excited to come and do it. He’s just such a well-raised kid. He’s so talented, he’s so funny and fit in perfectly with the cast. The cast and the crew loved him and it was special to have him.”

Kaling told Variety, “He’s such a humble kid and he just wants to learn. And he’s been raised by two very successful actors. He’s not wary or anything. He just came in with this open mind and was excited.”

Fisher said that she was immediately impressed by Phillippe from his first reading. “He was great, and we were like ‘Come aboard!’”

She added, “This is the first thing he has ever done, but he was such a professional. He was just raised like a wonderful young man. He came to set really prepared and he did a great job.”

One of the show’s main plotlines has centered on the love triangle between Devi, her former academic rival Ben Gross (Jaren Lewison) and popular jock Paxton Hall-Yoshida (Darren Barnet). With the addition of Pisharody’s character, Season 3 will explore Devi’s new romantic dilemma, which several cast members described as a “love square.”

Ramakrishnan teased that Season 3 is the show’s most “sexy” season yet and explained that she thinks fans will love the new dynamic. “Anirudh is great. It was fun to work with him and it was fun to spice it up,” she said. “Mindy and I think that stable relationships in TV are very boring. Because you know what, I can’t relate to a stable relationship, so I wouldn’t want to see it on TV.”

The third season of “Never Have I Ever” is now streaming on Netflix.