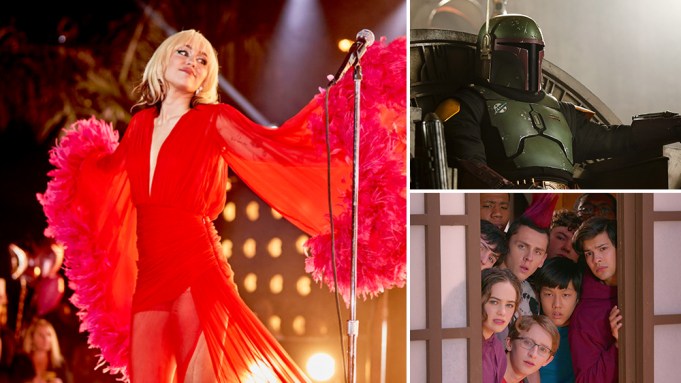 There were several televised shindigs ringing in the New Year last week, but according to Twitter, it was “Miley’s New Year’s Eve Party” on NBC that earned the most buzz, topping Variety’s Trending TV chart for the week of Dec. 27-Jan. 2.

The Pete Davidson co-hosted show had been heavily promoted ahead of its Dec. 31 Miami broadcast, with Brandi Carlile, Anitta, Jack Harlow, 24kGoldn and Saweetie also joining in the festivities. The compilation of live performances and pre-recorded sketches had more than 600,000 engagements on Twitter, which was boosted by several key moments.

Cyrus and her sister Noah Cyrus taking the stage together for a performance of Dolly Parton’s “Jolene” was a major highlight for fans of the siblings, while “Saturday Night Live” followers appreciated appearances by sketch troupe Please Don’t Destroy.

.@MileyCyrus and @NoahCyrus give a breathtaking performance of "Jolene" at #MileysNewYearsEveParty on NBC and @PeacockTV. pic.twitter.com/rZtLWgFMkx

"Listen, I'm only filling in because @jimmyfallon wouldn't answer the phone." - #PeteDavidson 🤣🤣🤣

However, one of the biggest moments of the night came just after the ball dropped, when Cyrus experienced a wardrobe malfunction onstage. In the middle of performing “Party in the U.S.A.,” the singer’s top came loose, exposing her chest. She covered herself with one hand and exited the stage, still singing, as the cameras panned to her backup singers. Cyrus returned seconds later in a red blazer to close out the performance.

As some looked ahead to the positive potential of 2022, others settled into nostalgia with the launch of Disney Plus’ “The Book of Boba Fett.” The Temuera Morrison-led spinoff of “The Mandalorian” dropped its first episode on Wednesday, and “Star Wars” fans responded to several of the episode’s Easter eggs as well as insights about the main character’s backstory.

If The Mandalorian and The Book of Boba Fett taught us one thing, it's that Jawas are the true menace of the Tatoonie and not Tusken Raiders as previously believed pic.twitter.com/f7nLCtKCK5

The Book Of Boba Fett
Stranger In A Strange Land pic.twitter.com/em3bxmf2z1

While the episode didn’t contain any Baby Yoda-type characters to get excited about, fans certainly appreciated the return of original trilogy character Max Rebo, who made a surprise cameo at Garsa Fwip’s (Jennifer Beals) establishment.

max rebo the light of my life has returned #BookofBobaFett pic.twitter.com/YNKAGlZQn4

The Book of Boba spoilers
-
-
-
The Max Rebo cameo was definitely one of the best scenes. Glad to see he survived the Sail Barge crash.#TheBookOfBobaFett pic.twitter.com/gmrZrMZoDc

Another “return” that made the charts this week was Betty White’s posthumous return to “Saturday Night Live.” Following the comedy legend’s death on Friday -- just two weeks shy of her 100th birthday -- the sketch show re-aired her 2010-hosted episode on Saturday.

RIP Betty White, the only SNL host I ever saw get a standing ovation at the after party. A party at which she ordered a vodka and a hotdog and stayed til the bitter end.

Nostalgia was also at play when the fourth season of “Cobra Kai” hit Netflix on Friday, pushing the “Karate Kid” continuation to the fourth slot on this week’s trending list. Fans immediately began dissecting the new 10-episode installment after bingeing it on New Year’s Day, while others avoided spoilers and simply shared their excitement over the return of Ralph Macchio, William Zabka and company.

here's your reminder that spoilers are NOT welcome in this dojo. https://t.co/nPPcoUke1Z

Slipping into the seventh slot in this week’s Top 10 was “Peacemaker,” in large part thanks to the release of the show’s second trailer on Thursday. Leading the charge was the star himself, John Cena, who shared the video on Twitter to get the 2022 mood rolling with a close-up of his biceps.

Anticipation for the show’s Jan. 13 debut on HBO Max also continues to build courtesy of creator-director James Gunn, who has been driving the chatter online with his own clips and teases.

True fans of peace know that it's best enjoyed one scene at a time. So, I'll start with this scene from the new red band trailer for #Peacemaker @DCpeacemaker @hbomax pic.twitter.com/r1Ktt4Xnz0

However, as viewers looked forward to what’s coming in 2022, they also appeared to use the holidays to catch up on some current appointment television. Viewers continued to engage with “Hawkeye” as audiences caught up with the Dec. 22 finale, and they also discussed the upcoming second season of “Euphoria” following the show’s official trailer drop on Dec. 20.

Rounding out the Top 10 is South Korean series “Our Beloved Summer” on Netflix, which dropped its Season 1 penultimate episode on Dec. 28.