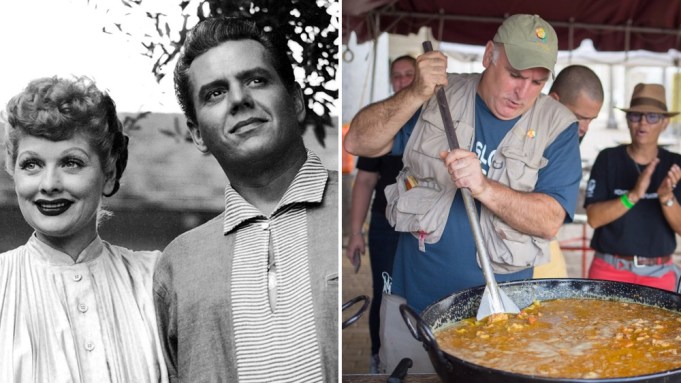 Documentaries about the first couple of television and a chef on a mission proved to be fruitful for Imagine Documentaries this year.

The four-year-old arm of Imagine Entertainment raked in eight Emmy nominations for two feature-length docs: Amy Poehler’s “Lucy and Desi” and Ron Howard’s “We Feed People.” The nods are the first garnered for documentaries by the company led by Howard and Brian Grazer.

Imagine Documentaries co-heads Sara Bernstein and Justin Wilkes told Variety that the recognition by their nonfiction peer group is both fulfilling and gratifying.

“You always ask yourself, ‘Do these awards really mean anything?” said Wilkes. “And the answer is, ‘Yes. They do. They do mean something because it means that the community at large is saying, ‘Hey, this work actually stands out.”

Bernstein added that the nominations “show the filmmakers we want to be working with that they are in great company with this incredible group of talented filmmakers that we’ve been lucky enough to collaborate with.”

The 102-minute film details the off-screen side of the legendary duo, diving deep into lesser-known aspects of their professional lives and Ball’s trailblazing career as a studio boss. After debuting at the Sundance Film Festival, the docu was released on Amazon Prime Video in March. In the directing category Poehler is nominated alongside documentary filmmaking veteran Andrew Rossi (“The Andy Warhol Diaries”) as well as top Hollywood helmers including Judd Apatow (“George Carlin’s American Dream”) and Peter Jackson (“The Beatles: Get Back”).

“It’s an absolute reflection of how hard Amy worked on this film and how committed she was to it,” Wilkes said about Poehler’s directing nod. “She’s obviously an incredible storyteller. She’s directed other (narrative) projects and she’s certainly written other projects. So, she comes from that story-first sensibility, and she was able to apply all of those skills magnificently to this “Lucy and Desi.” It’s great to see that that branch accepted her as one of their own and celebrated her.”

The National Geographic doc premiered at the South by Southwest Film Festival in March and debuted on Disney Plus in May. Beginning this year, The Television Academy shut down the controversial practice of awards double-dipping, decreeing that any documentary placed on the Academy of Motion Picture Arts and Sciences viewing platform for Oscar shortlist consideration, “will be deemed a theatrical motion picture and thus ineligible for the Emmy competition.”

Directors, networks and production companies, like Imagine, had to make a Sophie’s Choice with their documentaries this year. For Bernstein and Wilkes, submitting “Lucy and Desi” and “We Feed People” for Emmy consideration as opposed to Oscar consideration was a no brainer.

” ‘Lucy and Desi’ is about television,” said Wilkes. “From the beginning everybody felt that the audience for this film was ultimately a television audience just given who it was about. For ‘We Feed People,’ it was a real conversation about the immediacy of the story and the relevancy of the story, especially given what José has been doing in the Ukraine.”

(Pictured: “Lucy and Desi” and “We Feed People”)