Could Kim Cattrall Join ‘Emily in Paris’? One of the Show’s Stars Has the Perfect Role in Mind (EXCLUSIVE) 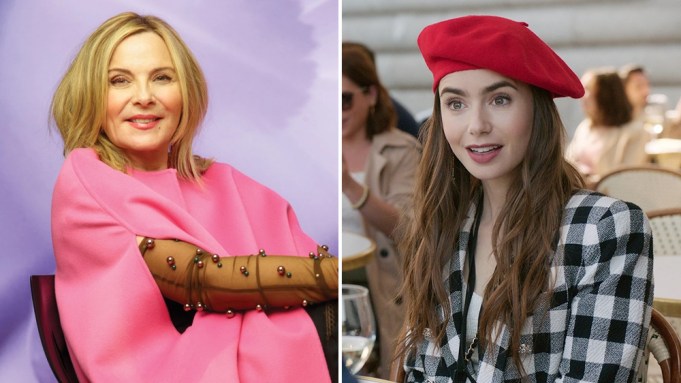 Star isn’t directly involved with “And Just Like That,” and neither is Cattrall. But on the HBO Max show, her character is said to be living in London. Of course, London is just a quick hop across the pond from Paris, where — theoretically, according to fan theories on social media — it could make of sense for Samantha Jones to appear on “Emily in Paris,” since both women work in the public relations and marketing space.

Star has already ruled out that theory, explaining that he doesn’t like crossovers, but he told Variety that he would love to create an entirely new role for Cattrall on “Emily In Paris.”

“I’m not a fan of crossovers…It’s two different universes,” Star told Variety‘s Marc Malkin in December at the Season 2 premiere of “Emily in Paris.”

In other words, don’t hold your breath to see Samantha Jones show up in Paris. But last month, he told Variety‘s Angelique Jackson, “I would love to have Kim come onto ‘Emily in Paris’ as a guest star. I would love to find something nice and juicy for her to do.”

And now, one of the stars of “Emily in Paris” tells Variety that he would love for Cattrall to join the series, saying if she were cast, it would be “wonderful.”

We also know that Cattrall is a fan of “Emily in Paris.” In a recent interview for her cover story in Variety‘s Power of Women New York issue, Cattrall said: “I think Darren got it right with ‘Emily in Paris.’ It’s a young show. It’s about young ideals. It’s about discovery.”

And we know that Cattrall and Star remain in touch. The TV creator showed up to celebrate Cattrall when she was one of Variety’s honorees at last month’s Power of Women ceremony. More of her friends from “Sex and the City,” including author Candace Bushnell and costume designer Patricia Field, were also in attendance.

“Emily In Paris” just began filming Season 3 — Lily Collins shared a photo in Paris Wednesday on Instagram — so here’s to hoping Cattrall shows up in our TV dreams.