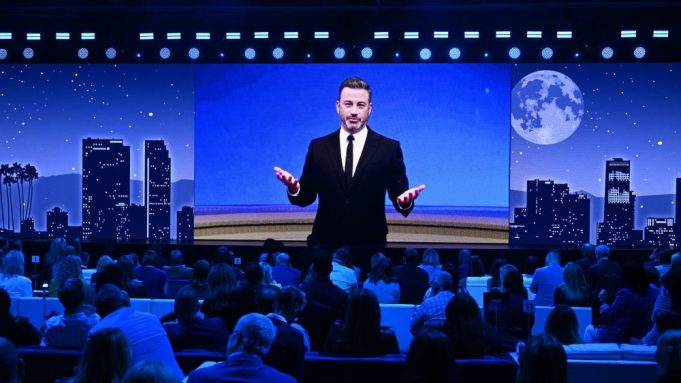 Jimmy Kimmel had zingers aplenty for companies across the TV spectrum at Disney’s upfront presentation on Tuesday, even though a positive COVID test kept the late-night host from appearing in person.

As always, Kimmel didn’t hold back at his bosses in his 10-minute standup bit that was beamed in live to the event held in a giant tent at Manhattan’s Pier 36. He noted that he’s been doing his much-anticipated comedy bits for 19 years. “When I started this, ‘Lost’ was one of our biggest hits. Now it’s our corporate motto,” Kimmel said.

Taking direct aim at Disney CEO Bob Chapek, who opened the Disney presentation (and who sports a bald head), the host of “Jimmy Kimmel Live” observed: “A Disney CEO has never spoken at the upfront before and now we know why.” He quickly added, in a reference to the Will Smith-Chris Rock slapping debacle at the Oscars, “Can’t wait to see you in ‘G.I. Jane 2.’ ”

Kimmel also likened the ABC network to be “like a fax machine five years after they invented email.”

He also pointed to Disney’s politically charged struggles in Florida these days. “We are one big happy family and if anyone in Florida asks — a straight family.”

Of course, Kimmel couldn’t help but skewer the high volume of reboots on network TV schedules. NBC’s plans to revive “Quantum Leap” and “Night Court” next season were singled out. “That isn’t a fall schedule — those are the tapes you find in your dead uncle’s VCR.”

He had choice words for Fox Corp. and the largely prerecorded event that it hosted on Monday.

“All of their executives are dead. They died of shame,” he said.

Other highlights of Kimmel’s commentary:

** On Netflix’s sudden embrace of advertising: “After watching those smug bastards choke the life out of us for years, it feels really good to see them stoop to selling you advertising….Oh, everybody loves ‘Bridgerton,’ right? How do you think they’ll love it when it’s interrupted by a Xyrtec commercial every four minutes.”

** On another sibling in the Disney family and its place in the streaming wars: “Shout out to Hulu, the Stephen Baldwin of streaming platforms.”

** On the CBS audience: “CBS renewed ‘Blue Bloods,’ aka Magnum Pee Frequently, for another 18 seasons, along with all their other old shows for old people.”

** On the longevity of “The Bachelor” franchise: “How are we going to keep it fresh? We are not we are going to keep doing the same shit until everyone has herpes.”

** On NBC’s fall prospects: “The only thing sadder than the finale of ‘This Is Us’ is the ratings for the Winter Olympics.”

** On in the inverse supply and demand curves of network TV ad sales: “The more viewers we lose, the more money you give us? What kind of message is this sending? You know, if you keep doing this, we’re never gonna learn.”