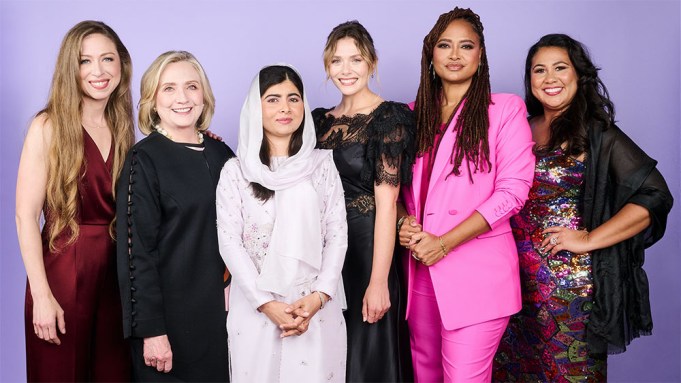 If it’s possible to pull off solemn conversations about the stakes for women around the world and also have a fantastic party that toasts their remarkable achievements, Variety did just that on Wednesday in Beverly Hills.

In a sprawling takeover of the Wallis Annenberg Center for the Performing Arts, heavy-hitting executives, producers, writers, talent and glitterati convened to celebrate the annual event and magazine feature.

Cover stars Hillary and Chelsea Clinton, Oprah Winfrey and Ava DuVernay, activist icon Malala Yousafzai, and actor Elizabeth Olsen were all in attendance to speak on behalf of causes important to each of them — as well as lighting a path forward to equity in a time of unrest for women and other marginalized communities in the U.S..

“It’s a choice to be optimistic,” Hilary Clinton told the crowd, addressing the striking down of the landmark American abortion legislation Roe v. Wade, the safety of women in Iran and a list of other fragile rights. “My late friend and predecessor as secretary of state, Madeline Albright, was once asked if she was an optimist. She said, ‘Yes. I’m an optimist who worries a lot.’ Let’s be optimistic but take our worry and channel it into action.'”

Her daughter, Chelsea Clinton, voiced a stronger sentiment, saying she was “full of palpable rage as I look at my daughter and realize she could have fewer rights than I did” growing up as a young woman.

“As we gather here, many of us truly never thought we would see abortion legally banned in certain states … in our lifetime. That changed in July. I truly believe the power to reverse that wrong lies as much with this crowd as it does in the halls of Congress,” said Cynthia Littleton, Variety co-editor-in-chief, during her opening remarks with Variety CEO and group publisher Michelle Sobrino-Stearns.

Meg Stalter, of “Hacks” fame, hosted the evening and began her remarks with a resounding, “Hi, girlies!” Channeling her distinct and beloved brand of awkward humor, Stalter spoke of loving the way she looks, “but I love the way I make people feel more.”

Olsen, of Marvel’s “Doctor Strange in the Multiverse of Madness,” was honored for her work with The Rape Foundation and Stuart House (the latter is a well-known Los Angeles resource for children who are victims of sexual abuse). She used the platform to celebrate the group’s leader, Gail Abarbanel. Olsen thanked the room for the space to share how Abarbanel has cared for victims and shaped perceptions through “policy reforms, educational reforms in our police force and in homes and communities.”

Honoree and Latino Community Foundation head Jacqueline Martinez Garcel made a particularly poignant speech where she encouraged the people of the communities surrounding the mecca of Los Angeles to become entrepreneurs and leaders. In a spontaneous moment, she bid the whole room to give thanks to “the workers who have served this food for us tonight.”

Yousafzai, in her new role as a content producer, delivered a hard dose of truth about diversity in front of and behind the camera.

“Asian people like me make up less than 4% of leads in Hollywood,” she said of actors. “Muslims are 25% of the population but only 1% of characters in popular TV series. Behind the camera, the statistics for Black and Brown creators are even worse.”

DuVernay and Winfrey gave a rousing spotlight to the 42 female directors, many of them first-timers, behind the OWN original series “Queen Sugar.” DuVernay brought the audience to fever pitch listing off the dozens of high-wattage shows these women have gone on to direct since getting a start. Oprah brought the evening home with wise words from her friend and mentor Maya Angelou.

“I told Maya that my school, which had just opened, was going to be my legacy. She said, ‘your legacy is never one thing. It’s everything you touch.’ Tonight I think of every life and story we touch,” Winfrey said.