Plus ‘Moon Knight’ rises and ‘Cobra Kai’ comes in strong. 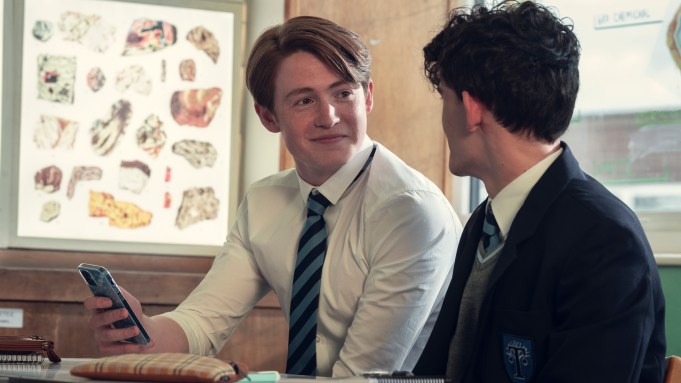 Viewers continue to fall for “Heartstopper” long after its April drop on Netflix. For the third week in a row the series topped Variety’s Trending TV chart, earning nearly 600,000 more engagements for the week of May 2 to 8.

The series was down week-over-week in terms of overall engagements, but first-season re-watches, people discovering the queer coming-of-age story for the first time, and fans clamoring for a second season (and profile icons) also added to the conversation. Series star Joe Lock, who plays protagonist Charlie Spring, further fuelled chatter following the revelation he would love to play the first gay Disney prince.

netflix we only want 2 simple things from you

Netflix just released their official top10 count for the week between april 25 and may 1, and heartstopper was the fifth most watched show (in english) on the plaftorm, with almost 24 million hours viewed!! pic.twitter.com/gHZlMTmSdA

The show also earned a celebrity endorsement in the form of Kerry Washington, who took to Twitter to share her love of the series.

Anybody looking for a pick-me-up after this difficult week??? #HeartStopper on @Netflix does NOT disappoint ❤️❤️❤️❤️❤️❤️❤️

“Heartstopper” revolves around a teen at an all-boys school who falls in love with his classmate (played by Kit Connor). It’s based on Alice Oseman’s Webtoon comic and graphic novel of the same name.

Coming in behind “Heartstopper” in second place on this week’s chart was “Moon Knight” following the May 4 finale drop on Disney+. The episode contained plenty of water cooler moments for fans to dissect online, including the reveal of May Calamawy as Scarlet Scarab, the MCU’s first Egyptian superhero.

The show has also been lauded for its innovative inclusion of QR codes, which fans could discover within certain episodes and use to unlock free web comics. This week fans also speculated whether the show will be a limited series, as originally promoted, or if Disney+ will reveal plans for a second installment following strong viewership.

“Cobra Kai” also excited fans this week following a surprise return announcement at the Netflix is a Joke festival. The series entered the Trending TV chart in third place with more than 107,000 engagements after confirming a fifth season return on Sept. 9 — months ahead of the expected New Year’s premiere. The announcement comes less than nine months following the fourth-season launch of the Ralph Macchio and William Zabka-starring series.

Our New Year’s tradition just got bumped up a few months. Cobra Kai Season 5 drops Sept 9, only on Netflix. pic.twitter.com/zwV47yCG5z

In addition to the date announcement, the streamer also dropped a teaser showcasing the results of last season’s All Valley Tournament and previewing several storylines for the upcoming season.

That wasn’t the only teaser getting attention this past week. HBO Max dropped a new “House of the Dragon” teaser and nine new character posters to help set the mood for the Aug. 21 debut, which helped catapult the series into the fourth spot on this week’s chart.

Starz’s “Outlander” was just behind in terms of overall engagements following its sixth-season finale on May 1, which continued to draw chatter throughout the week. The casting announcement of Charles Vandervaart as William Ransom, Jamie Fraser’s son, also fueled that conversation given the character’s prominence in the Diana Gabaldon books on which the show is based.

We have our new Willie! Please welcome @Charlesdv12 as the newest addition to the #Outlander cast. pic.twitter.com/dBDykmoafv

In sixth place on this week’s chart was another MCU offering, “Ms. Marvel.” The upcoming show has been in the Top 10 before, however this week most of the chatter was sparked by the decision to release the series theatrically in Pakistan, where Disney+ is currently unavailable.

This is the first Marvel series to star and revolve around a Muslim teen superhero. It hits Disney+ on June 8 but debuts in Pakistani cinemas on June 16 with the first and second episodes combined. The third and fourth episodes drop in theatres June 30 and the final two episode merge for one theatrical offering on July 14.

In seventh place this week was “Better Call Saul,” which earned another 55,000 engagements following a new episode (directed by star Rhea Seehorn) on AMC. It’s also worth noting the series recently took Netflix’s No. 2 spot on Nielsen’s streaming rankings, as viewers caught up with the series to the tune of 915 million minutes watched.

Hi! I directed tonite’s ep of ⁦@BetterCallSaul⁩ , written by the brilliant ⁦@AnnCherkis⁩ ! It was my 1st time directing TV,I still can’t believe it, & I still can’t thank my #bcs family enough 4 all the love & support every single day.
“Hit and Run”…here it comes!!! pic.twitter.com/HnFnUcIbi5

Netflix also represented the No. 8 spot on this week’s chart following a new promo for “The Umbrella Academy,” which returns for a third season on June 22. The show dropped a first look at the upcoming installment this week to generate excitement with fans, earning only a few hundred less engagements than “Better Call Saul.”

In ninth place and quickly climbing ahead of next week’s chart was Prime Video’s “The Summer I Turned Pretty” with just over 49,000 engagements. The coming-of-age series is based on the trilogy by Jenny Han (“To All The Boys I’ve Loved Before”) and stars Lola Tung as Isabel “Belly” Conklin, an teen whose summer vacation with her family lands her in a love triangle with her childhood friend and his brother.

Although Han has a built-in fanbase and readers were already eagerly awaiting the premiere, it was the inclusion of Taylor Swift’s “This Love (Taylor’s Version)” in the trailer that generated the most buzz. The performer quickly dropped the whole track as a digital single hours later.

#ThisLoveTaylorsVersion is coming back to us in the trailer for @thesummeritp! The new series is out June 17 on @PrimeVideo and This Love (Taylor’s Version) is out TONIGHT at midnight EST.

Rounding out this week’s Top 10 was “Our Flag Means Death” on HBO Max.