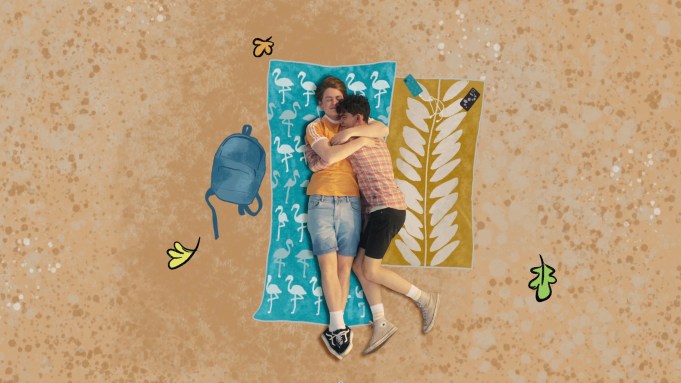 The debut of Netflix’s “Heartstopper” was the talk of Twitter over the weekend, catapulting over the competition and landing in the No. 1 spot on Variety’s Trending TV chart for the week of April 18 to 24. The series pulled in 929,000 engagements with its eight-episode debut, as viewers zipped through the 30-minute installments.

The British coming-of-age romance is based on the queer Webtoon comic and graphic novel of the same name by Alice Oseman. It follows high schooler Charlie Spring (Joe Locke), who falls in love with his classmate Nick Nelson (Kit Connor). So far in the few days since the series has been available on the streaming service, viewers have lauded its LGBTQ+ representations as well as the overall story and strong acting.

Heartstopper is out now on @netflix worldwide. This story is the light of my life. I hope it brings you joy 🍂 pic.twitter.com/oSZYxZOB9M

Well. I cried.
What an incredible series #Heartstopper @netflix pic.twitter.com/b0a5Ml2QIB

“Euphoria” also had a big week on the chart, returning in the second spot with 444,000 engagements following an HBO Max FYC event on April 20 at the Academy Museum. There, stars Zendaya, Hunter Schafer and others chatted about the events in Season 2 and stole the spotlight with their red carpet fashions.

Alexa Demie on what the future holds for her #Euphoria character: "Maddy's spirit telepathically sends Sam ideas of where she wants to go. So I let her do that." https://t.co/RUCrjBRQLl pic.twitter.com/DbP92H5MCA

Zendaya on Rue's future in #Euphoria: "We carried her all the way to hopefully what is rock bottom and a dark moment, and hopefully by the end leave with a sense of happiness and joy that there is hope for her in the end." https://t.co/RUCrjBRQLl pic.twitter.com/SZfnkXCej6

The event also included a screening of "Stand Still Like the Hummingbird" and a panel discussion with cast members and creator Sam Levinson. Throughout its second-season run “Euphoria” spent nearly every week in the No. 1 spot on Variety’s Trending TV chart, and has also been named the most Tweeted-about show of the decade so far.

Coming in third on this week’s chart was Netflix’s “Bridgerton,” whose second season recently overtook the first season in the streaming service’s all-time TV rankings. Nielsen Streaming reports that viewers watched more than 2.5 billion minutes of the series over its second-season premiere week in March. The show’s official accounts have helped to fuel even more online engagement in the subsequent weeks, including 100,000 extra engagements this week with additional teases and promos.

Miss Kate Sharma, entered the Ton not expecting to find love, but this Ton has the way of bringing about the unexpected. pic.twitter.com/tanZJPMzup

“Ms. Marvel,” Disney+’s latest TV series in the MCU, also returned to this week’s chart after an absence last week. More than 95,000 fans engaged with the show on Twitter as the official account kicked off a 50-day countdown to the June 8 premiere.

The upcoming series revolves around the MCU’s first Muslim superhero, Kamala Khan, played by Iman Vellani. The diverse series is already being lauded as a long overdue portrayal of Muslim girls and women and has been an anticipated series since production wrapped in Thailand in mid-March.

“Stranger Things,” which topped last week’s scripted series entries on the chart, continued to draw chatter ahead of its upcoming May 27 return to Netflix. The Upside Down players added another 93,000 engagements following last week’s new trailer and debut date announcement, proving the three-year wait between seasons has been a struggle for many excited fans.

Another MCU offering, “Moon Knight,” also continued to be a chart presence with a new episode drop on Disney+, “The Tomb,” on April 20. Although the show placed sixth on the chart, down just two spots from last week, overall engagement plummeted from 275,000 to 76,000.

In seventh place, “Our Flag Means Death” continued to draw conversations ahead of HBO Max’s decision on a second season with 65,000 engagements. Meanwhile “Outlander,” which paused last weekend for the Easter holiday, was back with a new episode April 24 on Starz. “Sticks and Stones,” in which a prominent character was arrested for murder, engaged some 64,000 fans, earning it this week’s eighth-place spot.

Rounding out this week’s Top 10 was “Better Call Saul” on AMC and AMC+ after it kicked off its sixth and final season with a two-part premiere, and “Big Mouth,” which received a seventh-season renewal at Netflix on April 18. The shows earned 54,000 and 49,000 engagements respectively.