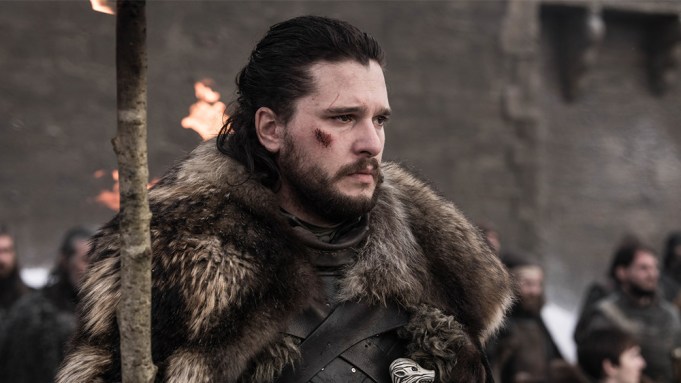 “Game of Thrones” iced out the Twitter competition on Variety’s Trending TV chart for the week of June 13 to 19, climbing to first place with more than 253,000 engagements on the social media platform.

The HBO fantasy drama, which wrapped its monumental, eight-season run back in 2019, surprisingly returned to the conversation not for its upcoming spinoff, “House of the Dragon,” but following the news that Kit Harington is attached to a Jon Snow spinoff series currently in development.

'Battle of the Bastards' aired 6 years ago today. It's the highest rated episode of Game of Thrones on IMDb. The episode received a record 6 Primetime Emmy Awards.#KitHarington #JonSnow pic.twitter.com/AFE19nIRYJ

The potential show would take place following the events of the “Game of Thrones” finale, in which Jon and his direwolf Ghost took off with the Wildlings into the Haunted Forest to begin a new life. The timeline means fans could expect cameos from other surviving fan-favorite characters, which added to the overall conversation.

The spinoff wasn’t the only reason the hit series returned to Twitter this past week. In a new interview, “Thrones” alum Maisie Williams admitted she was surprised when her character, Arya Stark, had sex with Gendry Baratheon (Joe Dempsie) in the final season, having always played the character assuming she was queer.

Maisie Williams Thought Arya Was Queer on #GameOfThrones: 'I Was Surprised' She Had Sex With a Man https://t.co/PSdmXcHRxk

That was enough to usurp “Stranger Things” from the top spot for the first time in three weeks. Still, the Upside Down players added another 193,000 engagements to the sci-fi series’ recent streak as viewers continued catching up on or re-watching the first part of Season 4. Speculation about the final two episodes, set to release July 1 on Netflix, also contributed to the overall conversation.

“Ms. Marvel” engagement was also down among Twitter users, dropping more than 60% week-over-week, to land in third place. Following its debut, the Disney+ series reported the lowest viewership of any MCU show on the streaming service, but fans still continued to dissect episodic plot points (as well as the show’s impressive soundtrack). Overall, the program pulled in 128,000 engagements heading into this week’s third installment.

In fourth place, another consistent chart-topper, “Heartbreaker,” continued to dominate Twitter. However, the focus has shifted from the show itself, which was renewed for second and third seasons in late May, and is now being used as a comparison to new Netflix series “First Kill.”

Fans of the LGBT vampire drama are using “Heartstopper’s” success to push for a second-season renewal following the June 10 drop.

need heartstopper fans to realise that netflix is notorious for cancelling sapphic media after the first season. this comparison is literally just lesbians holding netflix accountable: “if you can renew heartstopper with these numbers then why can’t you renew fk?” https://t.co/Z3RyoSOPr6

Rounding out this week’s Top 5 is Amazon Prime Video entry “The Summer I Turned Pretty,” based on the book trilogy by Jenny Han. The coming-of-age drama debuted on Friday with several key changes from the books. The Taylor Swift-heavy soundtrack also helped to engage fans online.

Who else is starting #SwiftieSummer by watching #TheSummerITurnedPretty on @PrimeVideo?? You may hear a few familiar songs… (approximately five of them) 👀🎶 @thesummeritp pic.twitter.com/iDkXDBRhYD

“The Summer I Turned Pretty” stars a young girl named Belly (Lola Tung), who suddenly finds herself in the middle of a love triangle with two brothers, after having grown up with them during summers at a vacation home. Prime Video previously ordered a second season of the show ahead of the nine-episode, first-season release.

Elsewhere, “Euphoria” continued to spark conversations, in sixth place, as HBO confirmed its Emmy submissions. Star Sydney Sweeney also opened up in an interview with Christina Ricci for Variety's "Actors on Actors" this past week, further driving chatter.

16.06 | Sydney Sweeney on Cassie's sexualization & "the perception of others on her because she has boobs."

"And then I see that happening to me in real life, even though everyone watched Euphoria. I go, "Did you not learn?" pic.twitter.com/folQKLQln8

Making its debut on the Trending TV chart with nearly 40,000 engagements was “Love, Victor” following the finale on Hulu/Disney+. The show wrapped on Wednesday after three seasons, capping the LGBT-focused story of a high school student adjusting to life in a new city and school. Many fans were vocal about the creative decisions behind the final season, taking to Twitter to express their frustration.

@/ love victor writing room what was your thought process behind this season? cause i rlly wanna know how ya’ll managed to FUMBLE almost every ship in that show pic.twitter.com/3YI3P2Fiyd

“The Flash,” which aired its last regular episode of Season 8 ahead of the two-part season finale on Wednesday, also returned to this week’s chart, in eighth place, with 36,000 engagements. Rounding out this week’s Top 10 was “Hacks” following a third-season renewal and Starz’s “Outlander.”