Plus ‘All of Us Are Dead’ holds strong, the Olympics debut and ‘Boba Fett’ creates chatter 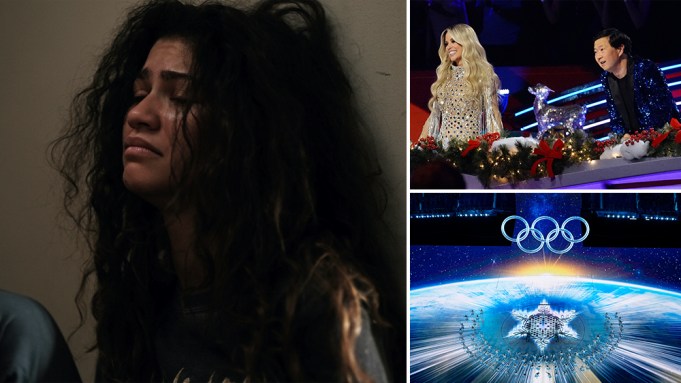 With 650,000 engagements, the series had twice as much interaction as last week’s top entry, “All of Us Are Dead.” HBO also confirmed the show’s Season 3 renewal last week, adding to the overall conversation about the second season’s fifth episode.

According to the cabler, “Euphoria” viewership has nearly doubled since last season, with 14 million total viewers across HBO and HBO Max to date. On social media, the drama has retained the top Twitter spot since its Season 2 debut on Jan. 9, only falling to second place last week with the launch of Netflix’s “All of Us Are Dead.”

That high school drama was runner-up this week with a total of 327,695 engagements on Twitter, as viewers continued to catch up on the 12-episode first season, which is breaking records on Netflix.

THE MAIN SLAYERS OF ALL OF US ARE DEAD pic.twitter.com/lH1As1PuL9

It's been a week since "All Of Us Are Dead" premiered and the drama is still number 1 on Netflix Worldwide Rankings 🔥 pic.twitter.com/DurecR3G3O

Rounding out this week’s Top 3 was “The Book of Boba Fett,” which held strong following last week’s reintroduction of the Mandalorian. The Mando action continued with the returns of fan-favorites Baby Yoda (Grogu to purists) and Luke Skywalker (Mark Hamill’s face and voice, courtesy of de-aging technology), and a few notable Easter eggs.

star wars: the empire strikes back // the book of boba fett pic.twitter.com/G6ePIdRS5j

Like last week, the penultimate episode featured very little of Temuera Morrison’s title character, which divided some fan as the series pushed forward to next week’s season finale, which promises a showdown with the Pykes.

the Disney+ intern who uploaded the first two epsiodes of Mandalorian season 3 instead of eps 5 and 6 of Book of Boba Fett pic.twitter.com/dMbfrGPodX

Anyone catch that quick Boba Fett stand in cameo on today's amazing 2nd episode of The Mandalorian season 3? #BookofBobaFett pic.twitter.com/58Rm25jSom

A showdown of another kind propelled “The Masked Singer” into fourth place this week. The Fox series is currently filming its seventh season. A leak from set claimed former New York City Mayor Rudy Giuliani was unmasked as one of this season’s contestants. The reveal reportedly led to panelists Ken Jeong and Robin Thicke walking off in protest. As a result, the show quickly climbed the trending chart.

The celebrity singing contest isn’t scheduled to debut until March. At time of press, Fox has refused to comment on the situation, telling Variety the series’ policy is to not acknowledge leaks or confirm spoilers. The reported reveal still sparked outrage, particularly among those who recalled Giuliani’s support of former President Donald Trump.

Retweet if you stand with @kenjeong for WALKING OFF the set of The Masked Singer when Rudy Giuliani appeared! ✋

Jimmy Kimmel slams Fox for having Rudy Giuliani on ‘The Masked Singer’: “How does this even happen? A lot of people at Fox had to sign off on this. Not one of them was like, ‘Hey, maybe we shouldn’t have the guy who is under investigation for helping to plot an insurrection on?’”

The Winter Olympics, broadcast on NBC and streaming service Peacock, also cracked this week’s list at No. 5. The first weekend of the much-anticipated event, which takes place in Beijing this year, drew more than 136,000 engagements online. Over the weekend, Julia Marino took home silver for the U.S. in women’s slopestyle snowboarding; Jaelin Kauf won her own silver for Team U.S.A. in the women’s moguls; and the U.S. figure skating team took second place in the team event with help from Madison Chock, Evan Bates and Karen Chen.

I have so much love for this team. For my coaches, my teammates and the rest of this support crew🤍 I couldn’t have done it without you.#Olympics2022 #TeamUSA pic.twitter.com/PjEYHDnvqJ

Rounding out the second half of this week’s Top 10 was “Peacemaker” and “The Mandalorian,” as well as the upcoming South Korean drama “Juvenile Justice,” starring Kim Hye-soo, which drops Feb. 25 on Netflix. The streaming service also generated a lot of conversation thanks to a casting announcement and start of production confirmation for “That '90s Show.” The “That '70s Show” spinoff features Kurtwood Smith and Debra Jo Rupp reprising their roles as Red and Kitty, respectively, now grandparents to Leia (Callie Haverda), who is visiting them in Point Place for the summer.

Adding to the buzz are reports that original series stars Topher Grace (Eric), Laura Prepon (Donna), Mila Kunis (Jackie) and Ashton Kutcher (Kelso) are in talks to reprise their roles, although nothing official has been confirmed.

Hitting the 10th spot on this week’s list was BBC America’s “Killing Eve,” which generated more than 56,000 engagements on Twitter thanks to a new trailer. The Sandra Oh and Jodie Comer-led spy thriller returns for its fourth and final season on Feb. 27.