SPOILER ALERT: Do not read if you have not watched Season 2 of “Euphoria” on HBO.

Lyla Garrity, the bubbly, spoiled country princess of “Friday Night Lights” iconically portrayed by Minka Kelly, had a thing for football jocks and hyping them up on the field, but that’s just about where the superficial similarities between Lyla and “Euphoria’s” Maddy Perez (Alexa Demie) — TV’s latest teen queen bee — end. Garrity was a cotton-candy angel compared to Perez’s sour and smart-mouthed demeanor. Beneath the looks and the cheer routines, however, are two young women who spend a lot of time preoccupied with figuring out themselves.

Kelly, who plays Maddy’s confidante and boss in a guest role on “Euphoria,” is happy to ditch the high-ponytails and play the older and wiser one now. “I like being a bit more grounded into the character that I’m playing — I’m not having a nervous breakdown every episode, ha, so that’s a nice change of pace!”

Kelly, a self-professed fan of “Euphoria” even before getting personally invited by showrunner Sam Levinson to join the cast for Season 2, was stunned when he told her that he had written a character — Samantha — with her in mind.

“It was a big leap of faith because I didn’t speak to him until our first day on set. But I’m such a fan of Sam’s writing and storytelling that I knew whatever he wrote was going to be great because he doesn’t do anything halfway or mediocre,” Kelly said. She didn’t know much about who Samantha would turn out to be for Maddy, and perhaps Levinson didn’t know either. Still, once he saw the chemistry between Kelly and Demie on-screen, he decided to keep Samantha’s character for more than just a cameo on Episode 2.

In Episode 6 of “Euphoria,” entitled “A Thousand Little Trees of Blood,” Samantha gives Maddy some hard truths during a night swim about friendship, love and soaking in all of the heartaches of young adulthood with compassion for herself and others.

Kelly spoke with Variety about why she finds showcasing dynamics on television like the one between Maddy and Samantha necessary, what it is like being back on a teen drama, and what parts of “Euphoria” make the show so… euphoric to her.

As first a fan and now as an actor in the cast, how has your relationship with “Euphoria” evolved?

I’m so much older than everybody, I just never even would have fathomed getting a part on “Euphoria.” On any set, being a guest on an already running show is a really tricky thing, especially if it is a show you know and love, because the last thing you want to do is barge in and get something wrong. You don’t want everyone regretting you being there, so you have to get it out of your head that this is one of your favorite shows when you are on set. Otherwise, you’re looking around in disbelief and distracted that you’re there — you have to pick yourself up by the bootstraps and get to work, just like everybody else. 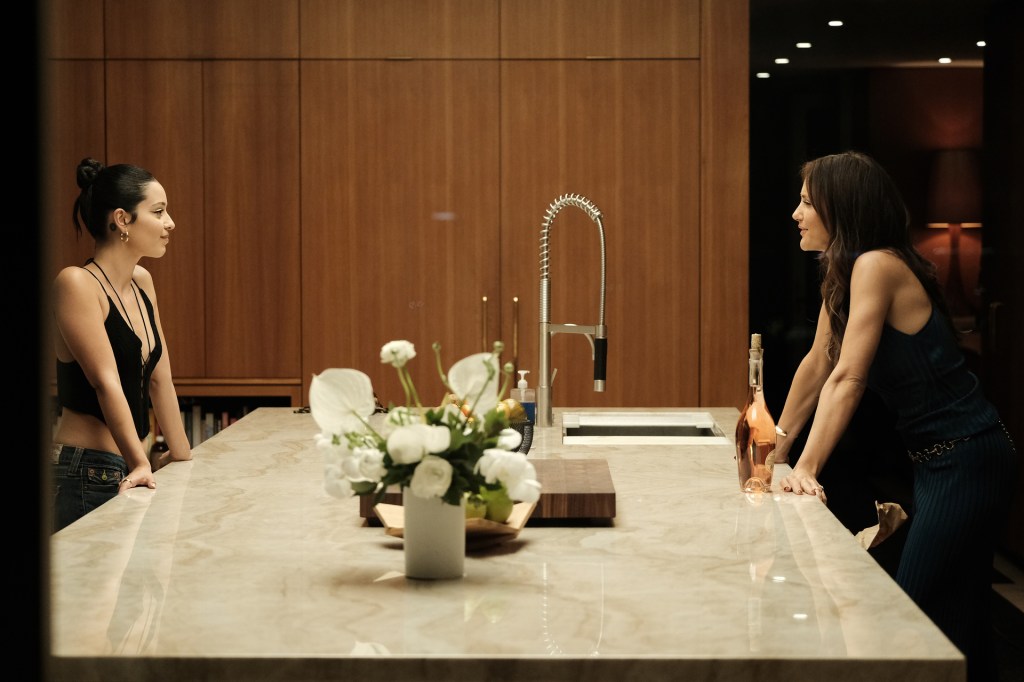 Tell me about your character, Samantha, and what makes her dynamic with Maddy special.

I only had one paragraph of dialogue when I first “met” Samantha, so, I didn’t really know who she’d be to Maddy — all I knew was that she was a wealthy mom that Maddy babysits for. I put faith in the fact that it would probably be more than what was on that one page because we’re dealing with Sam. So, I was only supposed to be in the first episode of Season 2, but then after working together, Sam brought me back and then discovered that he wanted me to have a moment or two with Maddy that went a little deeper.

Samantha is essentially the older, wiser version of Maddy. I’m there to put my arm around her and let her know that she’s only 17 and this is the time to make mistakes and to not look at people older than herself or to compare herself to anyone else. Because, on the surface, it looks like I’m just a successful woman and that I am in a happy marriage, but in fact, Samantha’s life wasn’t always perfect. She also went through the things that Maddy is going through, in a way, so she’s there to give her hope that she can have a healthy, non-toxic functioning relationship when she’s older with herself and with friends and partners.

Why do you think it’s important to show female friendships and acquaintanceships on-screen, especially positive portrayals?

I was excited because, personally, I owe everything to the older women in my life who have taught me by either example or conversation — or simply calling me out on my own shit and telling me how I’ve been in the wrong, or how I need to be a little less hard on myself. I feel like all I know is the power of women taking care of each other and looking out for each other and each others’ backs. And that’s not to say that I also don’t know the dynamic of being competitive with other women. I’m happy to see this new conversation happening around women, and how we have to fix each others’ crowns. I love seeing more of that on TV and in movies these days, because I think we’ve all grown out of tolerating pitting women against women in our media.

Your breakout hit was “Friday Night Lights.” What is it like being back on a teen drama?

It’s nice, because it feels like, as an adult character, Samantha gets to apply everything she’s learned and pass it on to Maddy, and hope that an ounce of it will get planted in her as far as it pertains to forgiveness and forgiving herself or for giving herself a break and not wanting to rush through this part of her life.

A lot of the conversation around “Euphoria” isn’t just about the writing or even the plot — it is about the aesthetics, the costuming and the cinematography.

When it first came out, I was so awestruck by the storytelling, and how “Euphoria” touches on subject matters that are very taboo and navigating delicate waters as a teenager, and young adults stumbling and crashing face-first before finding their way. I loved “Kids” when I was younger, and “Thirteen” is my favorite movie still to this day. I think it is important storytelling, and, yes on top of it it is also one of the most aesthetically beautiful shows I have ever seen. From the costumes to the makeup to the performances by all the actors and the directing — from top to bottom, it is such a stimulus to the senses all at once.

You’re also on HBO Max’s “Titans” — have you felt professionally supported by the network?

It’s been really such a dream, because there’s such freedom for the storytellers to tell their stories. Even working on a show like “Titans,” it’s a superhero show, but they are not afraid to get deeper and deal with drug addiction and sex addiction and pedophilia — the lack of fear when it comes to going dark is something that I am attracted to and excited by in my work.

And, hey, it’s also nice to go back to work [on “Euphoria”], and not have to put a wig on, hah. But, it’s such a pleasure working with HBO and with Sam Levinson because the process is so collaborative. “Euphoria” is malleable, and if he throws at an idea at you and you’re not into it, he’ll throw it out. He creates such a safe space for you to feel comfortable pitching your own ideas or saying that you don’t like something. I think part of what makes “Euphoria” so magical is that everyone has at least some part in telling their characters’ story, and that is the stuff that makes for great performances because everyone gets to feel authentic in the story that we are telling.