How ‘Gaslit’ Turned Fingernails Into the Sounds of Sacrifice 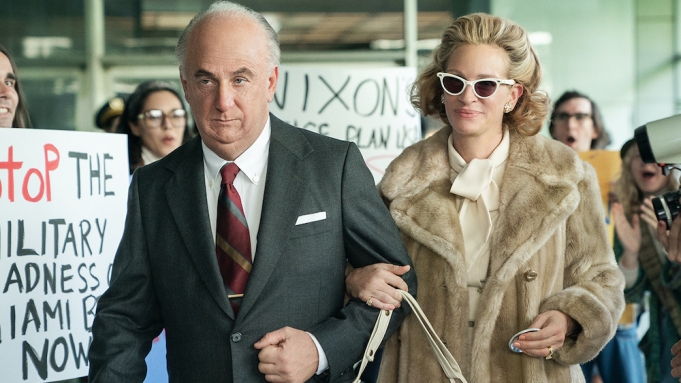 The political thriller takes a different look at the Watergate scandal. Rather than look at the infamous hotel break-in, the show examines the political relationships and the women — particularly Martha Mitchell, played by Julia Roberts.

In a key moment, John Dean is set to testify before the Senate committee.

The scene before shows John almost chickening out of his testimony. It’s a moment with Mo and the two are sitting outside an office. “He wants to give up and Mo says, ‘You are absolutely not going to give up. You think this is hard? This is not hard.’ Cook explains that the sound fades and all audiences hear is the sound of Mo’s fingernails clicking against one another as she cleans them and sees blood underneath. “That to us was the sound of sacrifice.”

In recreating John’s testimony, the duo worked on layering individual tracks from whispering and murmurs to courtroom audio for the scene to work. That meant pulling in environmental sounds as well as adding in sounds to support the storytelling.

Wilkins reveals at one point they noticed John’s sound was “incredibly small.” So, “we gave him a giant creaky chair to make him feel bigger.”

Wilkins and Cook also received a nomination for their work on HBO’s “Hacks,” mixing “The Captain’s Wife.”

The episode sees legendary comic Deborah Vance (Jean Smart) on a cruise. She thinks she is performing a show for a boat full of gay men — until Margaret Cho delivers the news to her that it’s actually a lesbian cruise.

Says Cook, “I loved mixing crowds and giving Deborah Vance that attention from doing well on the cruise to bombing by the end. That trajectory is all played with this wonderful collage of cut crowds, loop groups, and production crowds and weaving it together in just the right way to help tell that story of her succeeding or failing.”

The foghorn sound is one Wilkins is particularly proud of, not only because it was the “loudest boat horn I’ve ever played,” but it was a nod back to the 1970s.

Inspired by the British “Carry On” comedy franchise and films from the ‘60s, Wilkins drew on a comedic trope. “When someone was about to swear, we just cut to this giant horn, and it was a nod to old-style writing that I loved.”