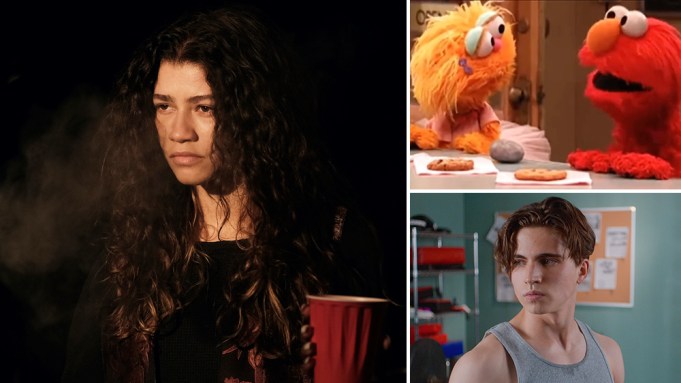 A 2004 clip of everyone’s favorite red muppet, Elmo, seeing red made the rounds on Twitter this week, catapulting HBO’s “Sesame Street” to the third spot on Variety’s Trending TV chart for the week of Jan. 3-9.

A user resurfaced a clip of Elmo and his monster friend Zoe arguing over whether her pet rock, Rocco, should get the last oatmeal raisin cookie, culminating in the popular children’s character losing his cool. The 30-second clip of an “unhinged” Elmo was relatable to many, and prompted a deep dive into all of the times Elmo and Rocco have feuded on the show.

there are tears in my eyes y’all my stomach hurting pic.twitter.com/bbkF9yDZLf

Tears is not the word. Am I the only one who don’t remember Elmo being like this 😭😭? LMAO pic.twitter.com/c8SHX35haP

Elmo furthered the conversation a couple of days later, asking if anyone has ever seen a rock eat a cookie. The post was liked more than 629,000 times and solicited thousands of responses, including celebrity reactions as Dwayne “The Rock” Johnson, Yvette Nicole Brown and Jada Pinkett Smith also weighed in.

Yes, my friend.
This Rock devours cookies.
All kinds of cookies 😈🍪
I’ll introduce you to #CheatMeals and it’ll change your life.
Tell Cookie Monster to move it over, cuz I’m coming to Sesame Street to kick ass and eat cookies.
And I’m almost all outta cookies.
~ Rock 🐂 https://t.co/BjlZciRqxU

. @elmo and zoe call me. I got seats for you both at @RedTableTalk anytime you are ready. There are 3 sides to every story❣️

On Friday, Elmo thanked everyone for all of the love, and also made it clear that he and Rocco aren’t on good terms just yet. “Big week for Elmo,” he wrote. “Elmo wants to thank all of Elmo's friends, new and old! @SesameErnie said Elmo and Rocco should shake hands, but you can't fool Elmo twice.”

Big week for Elmo. Elmo wants to thank all of Elmo's friends, new and old! @SesameErnie said Elmo and Rocco should shake hands, but you can't fool Elmo twice. pic.twitter.com/4yL55tRwWp

The feud with the inanimate object was enough to catapult the children’s show into the Top 3, but it was Sunday’s much-anticipated second-season debut of “Euphoria” that earned the top spot. Nearly 970,000 people engaged with the HBO drama, as star Zendaya took to Twitter to remind her fans that the show is for “mature audiences.”

The Sam Levinson-run series has been generating buzz for the past few weeks following its trailer drop on Dec. 20, which is understandable since fans have been waiting for the new season for more than two years. Two pandemic-shot installments aired in between, but Sunday night was the first time that fans were able to catch up with all of the characters at once since the Season 1 finale on Aug. 8, 2019.

Taking the second spot on this week’s report was the online-only Golden Globes. The Hollywood Foreign Press Association opted for a social media awards rollout this year following NBC’s decision to sit a year out so the org could take time to “commit to meaningful reform.”

The strange, members-only “show” came as a surprise to many in the industry, and although there were more than 782,000 engagements with winner announcements and PSAs from the likes of Jamie Lee Curtis and Arnold Schwarzenegger, most tweets were snide in tone as many critiqued the painful rollout and lack of pomp and circumstance.

If a tree wins a Golden Globe in the forest but it’s not televised, does it still make an embarrassing speech?

The conversation did take a positive turn following some of the wins. There was plenty of love for “Pose” star Michaela Jaé Rodriguez, who became the first transgender woman to win an acting trophy at the show. Fans also seemed just as thrilled to see “Tick, Tick … Boom!” star Andrew Garfield win best actor in a comedy or musical, although many took the opportunity to expound on their love of the actor in “Spider-Man: No Way Home.”

Rounding out the fourth and fifth spots on this week’s trending list were “Cobra Kai,” which continued to kick up conversation following its fourth-season release on Dec. 31, and “Peacemaker,” thanks to star John Cena pumping up his fans by reminding everyone on Jan. 6 that there was only one week left until the HBO Max series’ premiere.

ONE WEEK until #PEACEMAKER (and Eagly!) bring ✌️to @hbomax!!