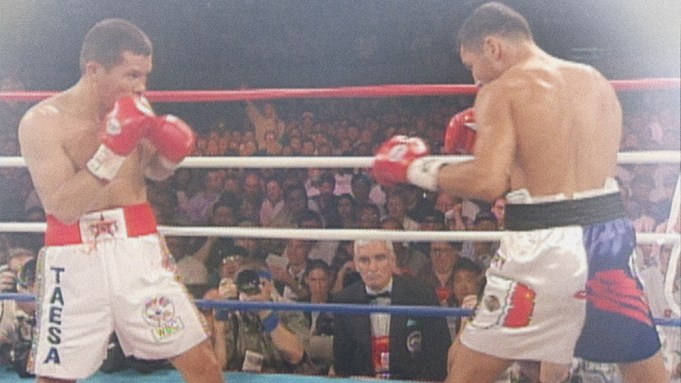 DAZN , the world’s leading dedicated sports streaming platform, has amped up its 2022 global original content slate launch with the news that the U.K.-based outfit is launching a new, bespoke production wing dedicated to original content. Accompanying the news, DAZN has also given Variety exclusive access to the international trailer for the streamer’s most ambitious original play yet, Eva Longoria Bastón’s documentary directorial debut “La Guerra Civil,” playing at this year’s Sundance Film Festival.

“La Guerra Civil” documents the epic rivalry between all-time great boxers Oscar De La Hoya and Julio César Chávez in the 1990s, which ignited a cultural divide between Mexican nationals and Mexican-Americans on both sides of the border. That the documentary is about far more than boxing is clear from the first words spoken in the trailer. Archival footage is interspersed with first-person insights offered BY both men in interviews recorded for the documentary, corroborated by several other key figures in the boxing and Mexican American communities.

Best known as an award-winning actress for her work on shows like “Desperate Housewives” and “Brooklyn 99” and films including “Harsh Times” and “The Sentinal,” Longoria Bastón is also an Emmy-nominated director, producer, and activist who recently finished her feature directorial debut “Flamin’ Hot” for Searchlight, with La Guerra Civil marking her documentary debut. Longoria Bastón has been vocal about her pride in the film and what it means for the Latino community as it explores identity issues that stemmed from the fight – what it meant to be “Mexican enough” as well as what it means to straddle the hyphen of being Mexica-American.

Although a DAZN Original, “La Guerra Civil” is not a DAZN Studios production, as it was commissioned, developed and produced before that part of the company had been established. According to the streamer, from here on out, DAZN Originals will be the company’s brand name for its high-end documentaries and series made in partnership with leading talent in the screen and sports industries, while DAZN Studios is the company’s specialist content development arm which will be the newb home for all future DAZN Originals.

In a release, DAZN COO Ed McCarthy, said: “Sport has the power to inspire and connect people around the world, and evocative storytelling can bring us closer to its beating heart. DAZN Studios is going to enable us to broaden our original programming offering with productions that not only drive deeper engagement with fans but create opportunities via licensing, distribution, advertising and commissions. We know that the way we tell stories never stops evolving. We already work with some of the biggest names and organisations in sport and film today, but as DAZN continues to grow, we also want to enable the next generation of filmmakers and invest in the future talent of sports storytelling.

“We are incredibly excited to be working with the next generation of creators and giving them an environment to do what they do best: Create engaging and innovative productions,” added DAZN’s EVP Global Commissioning & Original Content, Grant Best. “DAZN Studios will be a space where artists have the space to be creative and produce documentaries, series and films in the world of sport,” he added.

With no concrete release dates yet announced, and therefore in no particular order, DAZN Studios’ 2022 originals slate is headlined by a trio of soccer-themed documentaries labelled as the World Cup Stories, all three set to arrive sometime this fall, just ahead of the Qatar World Cup.

“Green Lions” will shine a light on one of the sport’s most iconic World Cup moments when, in 1990, Cameroon became the first African nation to compete in the sport’s most prestigious competition, when they played in the Cup’s opening game against Argentina, the reigning champions and a favorite to win the tournament on the backs of several of the sport’s best players at the time, including Diego Maradona. Shocking the world, Cameroon upset the champs.

In “Green Lions,” DAZN Studios will go into the Cameroon training camp to provide a long overdue deep dive into one of the greatest underdog stories in soccer’s long history by speaking with players from the time, and several later professional African players who owe a great deal to that groundbreaking team.

“What happened was that through their success of that World Cup, you then saw the movement of the African players being scouted by the biggest leagues in the world,” Best explained. “That’s still so important and relevant today, and a lot of it started with that Cameroon team.”

In “Maradona: The Fall,” DAZN proposes a more critical look at one of the stars of that 1990 World Cup, and, in the opinion of most, one of soccer’s greatest-ever players. Since his death in November 2020, there has been no shortage of Maradona content produced, both documentary and drama. With “The Fall,” DAZN will focus on a seldom discussed part of El Pibe’s career when the player failed a drugs test during the 1994 U.S.-hosted World Cup.

Featuring interviews with former FIFA president Sepp Blatter, Argentina national teammate Claudio Canigga and American lawyer and sports businessman Alen Rothenberg, the President of U.S. Soccer at the time, the documentary presents itself as the definitive story of what happened to the world’s greatest player at its most important tournament. “Maradona: The Fall” is directed by Angus MacQueen (“Maradona in Mexico”) and produced by Ronachan Films.

Best is confident that DAZN are “touching on something new here. There have been many books, many films and series made about Maradona, and they’re all really interesting, but we found that this story hasn’t been told, about how and why Maradona was expelled from World Cup ’94.”

In May of last year, Variety announced a three-project development deal between DAZN and Brazilian soccer legend Ronaldo Nazario, which kicked off with the documentary series “El President” about O Fenômeno’s 2018 return to Spain’s top soccer division La Liga, this time as part-owner of Valladolid FC, a mid-table-at-best club traditionally more likely to fight against relegation than win any trophies.

Now, DAZN has unveiled “Ronnie,” their second in a three-project deal which the streamer boasts will be the conclusive documentary about Ronaldo the player. Built around the historic highs and heart-breaking lows of one of soccer’s most impressive careers, the feature-length documentary focuses on Ronaldo’s national team experiences, including the still shrouded-in-mystery World Cup Final in France ’98, and the series of injuries that plagued him in the years leading up to the 2002 World Cup, where the player not only played but shone as the tournament’s leading scorer. The film features interviews with national team and Real Madrid teammates as well as several rivals who played against Ronaldo in those world cups, including Paulo Maldini, Romário de Souza Faria and Zinedine Zidane. It’s produced by Zoom Sport and DAZN.

“We believe we’ve made the definitive film about Ronaldo the player,” Best proudly explained. “We see the rawness of his career which is often defined by the low points of these horrific injuries, but then we get this great redemption arc of World Cup ’02 where he became a Golden Boot and World Cup winner once again.”

“La Guerra Civil” will world premiere at this year’s Sundance on Thursday, Jan. 20 with the three World Cup Stories planned to release globally on the platform in fall of this year.