Will Bryan Cranston and Aaron Paul Appear in ‘Better Call Saul’? Creators Say ‘It Would Be a Damn Shame’ if They Didn’t 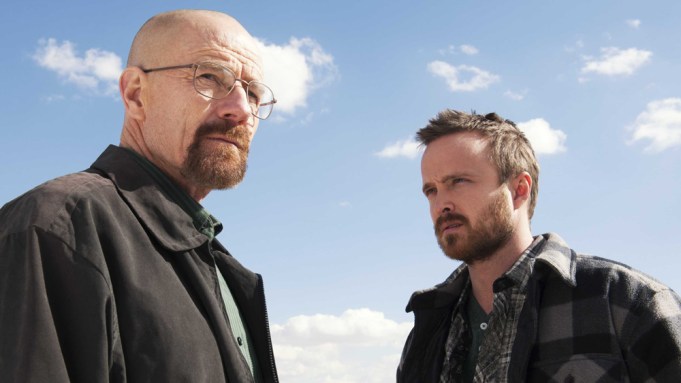 The question of whether Bryan Cranston and Aaron Paul would appear in “Better Call Saul” has loomed over the prequel series ever since its inception. And while co-creators Vince Gilligan and Peter Gould have remained coy about the possibility of that crossover, the masterminds behind “Better Call Saul” told Variety at the final season premiere that if ever there was a time for the “Breaking Bad” stars to enter the “Saul”-verse, it would be now.

As Gilligan said with a smirk, “It would be a damn shame if the show ended without [Cranston and Paul] appearing, would it not?” He later added, “You heard it here first.”

With its sixth and final season premiering on April 18, “Better Call Saul” takes place before the events of “Breaking Bad.” But as the hit AMC spinoff series nears the timeline of its predecessor, Gould says, “If it’s ever going to happen, this is when these two shows start crossing over.”

While Cranston and Paul played Walter White and Jesse Pinkman, respectively, it’s unclear whether they will reprise the same roles in “Better Call Saul.” As Gould said coyly, “These two worlds crossover in a way that you haven’t seen before, that’s for sure.”

When asked what will surprise fans most about the final season of “Better Call Saul,” star Bob Odenkirk told Variety, “I could tell you in two words, but I can’t tell you. Some wonderful new characters… your brain is gonna explode when you see them.”

Bob Odenkirk on what will surprise fans the most in the final season of #BetterCallSaul: "I could tell you in two words, but I can't tell you." https://t.co/KPzJLqAz5I pic.twitter.com/Ph1cHE8DN0

Odenkirk continued, “I personally feel that the two shows — ‘Breaking Bad’ and ‘Better Call Saul’ — are entwined even more than ever in the final season. And I think that’s surprising and cool, and it’s gonna make you want to watch ‘Breaking Bad’ again.”

While “Breaking Bad’s” Giancarlo Esposito and Jonathan Banks also star in its prequel series as Gustavo Fring and Mike Ehrmantraut, many other characters from the Vince Gilligan Cinematic Universe have also made their way into “Better Call Saul,” including Hector Salamanca (Mark Margolis), Don Eladio (Steven Bauer) and the Salamanca twins (Luis and Daniel Moncada). Even Hank Schrader (Dean Norris) and Steven Gomez (Steven Michael Quezada) made cameos.

“Better Call Saul” also stars Rhea Seehorn, Tony Dalton, Patrick Fabian and Michael Mando. The series was developed by Gilligan and Gould, with Gould serving as the sole showrunner since Season 4. The two produce with Mark Johnson, Melissa Bernstein and Thomas Schnauz, and the series is produced by Sony Pictures Television.