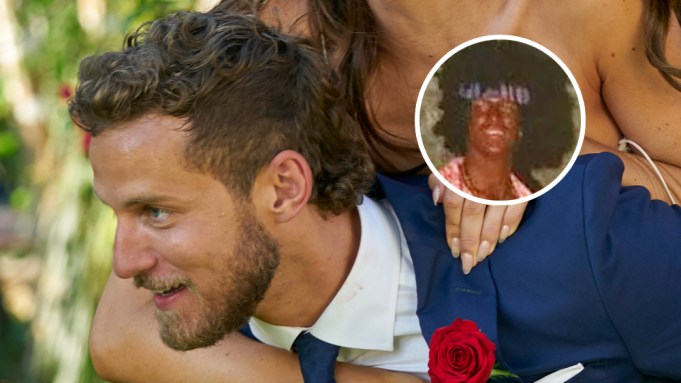 This week’s season finale of “The Bachelorette” saw a happy ending for leading lady, Gabby Windey, who received a proposal from her final suitor, Erich Schwer. But despite the couple’s engagement, their road to find love on reality TV was not without controversy — and not just the on-screen drama you expect from a dating show, but the real trouble that comes with being thrust into the public spotlight.

Towards the end of the season, an old photo from Schwer’s high school yearbook surfaced online, showing the then-teenager wearing blackface as part of a high school Halloween costume in which he dressed up as Jimi Hendrix with dark makeup and an afro wig.

Earlier this month, the reality star apologized for what he called an “insensitive photo,” posting a black square on his Instagram with a caption that read, in part: “What I thought at the time was a representation of my love for Jimi Hendrix, was nothing but ignorance. I was naïve to the hurtful implications of my actions to the Black community and those closest to me, and will forever regret my offensive and damaging behavior. I am deeply ashamed by my actions and understand that my apology is only the first step in taking accountability.”

Last night’s finale of “The Bachelorette” addressed a slew of off-camera controversies, including one of Schwer’s exes sharing screenshots of text messages that he had sent her right around the time he joined the ABC show. (Windey told host Jesse Palmer that her now-fiancé had told her about those messages prior to them becoming public on social media, and the couple dealt with it on their own.) But audiences noticed that amid the onslaught of drama being discussed among Windey and her fellow “Bachelorette” Rachel Recchia’s own cheating scandal, the blackface issue was not brought up once during the three-hour live episode.

Social media users across Twitter and TikTok noted that Schwer’s blackface photo was not addressed, as did alums from Bachelor Nation, including the first-ever Black “Bachelorette” star Rachel Lindsay and former contestant Thomas Jacobs, who said the show swept the issue “under the rug.”

In a conversation with Variety on Wednesday, the morning after the finale aired, Windey was asked about her fiancé’s yearbook photo.

“I found out with the rest of the world and it was an immediate punch in the gut — really, truly devastating,” Windey told Variety. “So, it was hard for both of us just to kind of weigh our values and where we’re at and how this came about. And there is no excuse. He apologized, but ultimately there’s really no excuse for this behavior. I think we’re just really reflecting on ourselves, learning about where these biases come from [and] how they affect other people and how to change them and how to grow.”

This is not the first time “The Bachelor” franchise has dealt with controversy surrounding race. In 2021, during Matt James’ season, which was the first season starring a Black “Bachelor,” his eventual winner, Rachael Kirkconnell, had a photo from her past surface that showed her in attendance at an antebellum plantation-themed fraternity formal back in 2018. At the time, when she was the frontrunner contestant on that season, longtime host Chris Harrison defended her in a now-infamous TV interview in which he invoked the term “woke police,” causing a social media uproar and a revolt from BIPOC cast members. The scandal led to Harrison’s departure, after he had served as the franchise’s host for nearly 20 years.

“The Bachelor” has been subject to criticism for its lack of inclusive casting over the years, particularly of its leads, but has made efforts to increase the pool of diverse contestants and brought on the franchise’s first Black executive producer last year. The franchise has also faced questions regarding its background check process, especially as social media sleuths have unearthed findings from contestant’s pasts in recent seasons.

ABC declined to comment on the blackface photo when contacted by Variety.