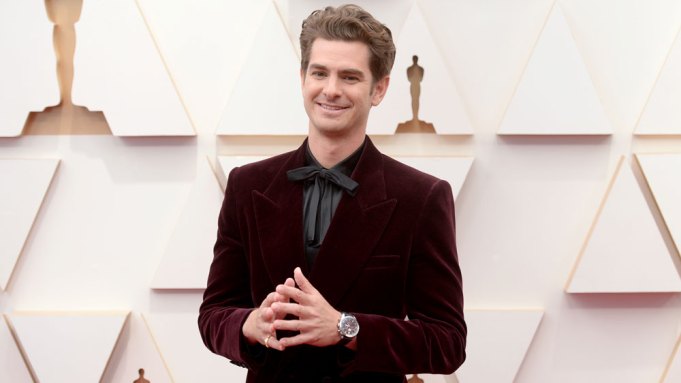 Andrew Garfield is ready to take a break. The actor has been going nonstop for the past year or so with “The Eyes of Tammy Faye” and “Tick, Tick … Boom!” Now, he can be seen in “Under the Banner of Heaven,” FX’s limited series adaptation of Jon Krakauer’s 2003 true-crime book of the same name. Garfield plays a Mormon detective investigating the brutal murder of a mother (Daisy Edgar-Jones) and her baby daughter by fundamentalist followers of the Church of Jesus Christ of Latter-day Saints. “I’m going to rest for a little bit,” Garfield, who earned his second Oscar nom for “Tick, Tick,” tells me. “I need to recalibrate and reconsider what I want to do next and who I want to be and just be a bit of a person for awhile. Because as you know, that is a washing machine, that awards season.” Not that he’s complaining about the recognition: “I need to just be a bit ordinary for a while.”

With a mix of religion and murder, “Under the Banner of Heaven” is anything but light material. “I think it was actually a necessity for us to have game nights and go into nature and hike and you know, swim and dive and lakes and dance and eat good food so that we could really come back and fully give ourselves [to the work],” Garfield says. “We had to keep on taking care of ourselves so that we can take care of the story.”

The series, written by Oscar winner Dustin Lance Black and directed by David Mackenzie, isn’t Garfield’s first foray on television. One of his first jobs was when he was 21 years old on a U.K. show called “Sugar Rush.” “I remember getting that first TV gig and knowing that I was going to get paid for acting in a way that I could pay my rent and I could have the occasional one nice meal a month,” he recalls. “I remember going out with my friends that night and just kind of celebrating. We went to a club called Turnmills. It got messy. I was so happy.”

For more from Mr. Garfield, watch the video above.

O-T Fagbenle gamely took on the role of President Barack Obama in “The First Lady” opposite Viola Davis as Michelle Obama. The Brit actor says the next living legend he’d like to portray is Harry Belafonte. “He’s such a great artist, but he also made such a difference in the civil rights movement,” Fagbenle says. But does he have the vocal chops to perform hits like “Day-O”? He says, “I do sing a little bit.”

Have some free time over the next few days? The Maybourne Beverly Hills is offering an afternoon tea from its London sister hotel Claridge’s through April 30. Located at the Maybourne’s third floor Garden terrace, seatings are at 2 p.m. The service is a preview of Afternoon Tea at the Maybourne, which will debut next year in the hotel’s redesigned lobby. For more information, go to maybournebeverlyhills.com.

No surprise, but Colin Hanks says he gets pitched a lot of projects to co-star with his dad, Tom Hanks. “Far too many times,” Colin says with a laugh while promoting his latest, Paramount+’s “The Offer.” He reveals there is one film they talked about doing together: “It was something where we played the same person, and the only person I ever wanted to do that with was [‘Never Let Me Go’ director] Mark Romanek. Unfortunately, we never got past the conversation. It’s not because anyone said no. I think it was because there were too many other things everyone else was saying yes to.”

“The Offer” chronicles the making of “The Godfather.” Hanks plays a Paramount studio executive who tried to have the production shut down over budget concerns. “The character I played is actually a composite character,” Hanks explains. “He is basically the one guy that doesn’t want to make ‘The Godfather.’ “I thought I was going to be at an incredible disadvantage because the rest of the cast had real people to draw from, but I actually ended up with incredible free rein because I wasn’t playing an iconic, supremely identifiable, larger than life person. I was able to create my own guy and create my own character with his own wants, needs and desires that obviously go against the grain of pretty much everybody else.”

After directing docs and a music video, helming feature film could be next for Hanks. “I’ve been flirting with it and trying to get that miracle of getting an idea that’s good,” he says. “I would like to for sure.”

Have you watched “Heartstopper,” the new Netflix YA series about two high school boys — Charlie (Joe Locke) and Nick (Kit Connor) — whose crushes on each other turn to romance? It is sweet, beautiful and moving. It made my heart stop several times. The show is based on writer and illustrator Alice Oseman’s web comic and graphic novel series of the same name. While most of the cast are newcomers, Olivia Colman makes an appearance as Nick’s mom. “We came up with the idea to reach out to big names to play her,” Oseman told me over the phone from her home in the U.K. “I thought this was the silliest idea ever. I really thought there was no way anyone famous would want to be in the show, but we decided to go for it anyway, and Olivia Colman was our top choice.” Turns out “Heartstopper” director Euros Lyn worked with Colman on “Broadchurch.” “We sent her some scripts and some of the comic, and she wanted to do it!” Oseman says.

Oseman is still amazed that she was given the go-ahead by producers to adapt her work for television. “They suggested that I try writing the first three episodes,” Oseman recalled. “I’ve never written a screenplay before. I went into it like, ‘I’m gonna do the best I can. But is it it’s not that great, then that’s fine by me. I’ll be happy for us to get another writer to do it.’ But I believe they really liked it.”

What the “Heartstopper” universe could mean to young queer person isn’t lost on Oseman. “If ‘Heartstopper’ helps a young queer person in their coming out journey, or if it helps a parent understand their child a little bit better, it is the most lovely and heartwarming thing you could hear and makes it feel like it’s all worth it,” she says.

The cast also includes trans actress Yasmin Finney as Elle, a new student at an all-girls school. “We had to cast a trans actress to play Elle. There was never any question about that because we know a cis actor as a trans character is genuinely harmful and damaging to the trans community,” Oseman says. “We put out a big international casting call for Elle because we knew how difficult it was going to be to find a trans actor of color who is a teenager. We were really nervous about not being able to find someone to play Elle. Luckily, we found Yasmin, who is amazing. We’re very lucky.”

Expect to hear more from me about “Heartstopper.” In the meantime, please check it out on Netflix when you have the chance.

Merry Christmas from Kal Penn! In the Disney+ series adaptation of the “Santa Clause” film franchise, the actor co-stars as Simon Choksi opposite Tim Allen, who reprises the titular role. “Simon is sort of a tech wizard, like a Jeff Bezos-esque kind of guy,” Penn tells me. “He’s somewhat of a Santa nemesis.” He reports that the Santa Cinematic Universe is “so cool.” “We all loved this movie as kids,” Penn says, referring to the original 1994 film. “But to see this updated version with all the technologies we have now, it’s just incredible.”