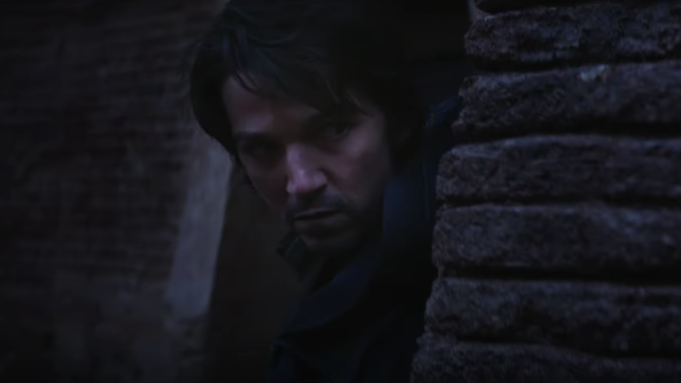 Diego Luna’s Cassian Andor is going from a galaxy far, far away to a television screen near you very soon.

“Andor,” a prequel series to “Rogue One,” will premiere on Disney+ on August 31 with a two-episode launch. It will have 12 episodes total, but 12 more episodes, making up a Part 2 to the series, will begin filming in November. The Part 2 will lead up directly to the events of “Rogue One,” it was announced at the 2022 Star Wars Celebration.

Also revealed on Thursday, Nicholas Britell will score the series. The new trailer shows the darker, grittier side of the Star Wars universe and offers a first look at Stellan Skarsgård’s rebel leader and Genevieve O’Reilly’s Mon Mothma.

The Disney+ series serves as a prequel to the 2016 standalone film “Rogue One: A Star Wars Story,” which chronicled how a ragtag group of Rebel spies, led by Jyn Erso (Felicity Jones) and Cassian Andor (Luna), infiltrated the Imperial military base that held the plans for the Death Star. Following on the heels of the gargantuan success of “Star Wars: The Force Awakens,” “Rogue One” grossed just over $1 billion worldwide.

“Andor” is set five years before the events of “Rogue One,” and it tracks how and why Cassian joined the rebellion as the Empire aggressively expands its reach across the galaxy. Forest Whitaker is reprising his performance from “Rogue One” as Clone Wars veteran and radical insurgent Saw Gerrera, and O’Reilly is returning as Mon Mothma, one of the founders of the Rebel Alliance.

Tony Gilroy, who co-wrote the “Rogue One” screenplay and was the uncredited director on reshoots for the film, created the 12-episode series, and he’s promised a narrative that reaches across a vast ensemble, including Skarsgård (“Thor”), Adria Arjona (“Morbius”), Fiona Shaw (“Killing Eve”), Denise Gough (“Under the Banner of Heaven”) and Kyle Soller (“Poldark”). The directors include Toby Haynes (“Black Mirror: USS Callister”), Benjamin Caron (“The Crown”) and Susanna White (“Bleak House”).

The “Andor” news was part of Lucasfilm’s main presentation at the Star Wars Celebration convention in Anaheim, Calif. — the first time “Star Wars” fans have gathered in person since the pandemic.