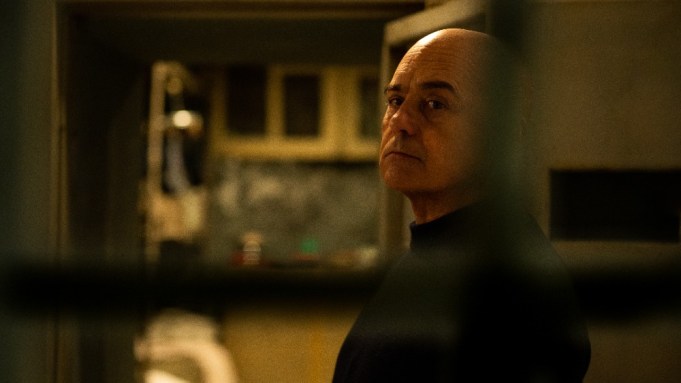 While in “Montalbano” Zingaretti played a simpatico Mafia-fighting Sicilian sleuth, in “The King” he undergoes a monumental character change, becoming the psychopathic Buno Testori (watch trailer above) director of the lawless San Michele penitentiary, which is located on an unspecified Italian border territory that is not subject to Italian law where he can apply his totally personal idea of justice.

Testori is ruthless with those who deserve it and unexpectedly compassionate with others, “always following the principles of his own distorted and obscure morals,” according to the provided synopsis. As the trailer puts it: “Every kingdom has its own rules.”

The dark show is penned by Stefano Bises, whose credits include “Gomorrah,” “ZeroZeroZero” and “The New Pope,” and a top notch team of other Italian scribes.

The eight-episode “The King,” is helmed by Giuseppe Gagliardi who previously directed Sky Italy original “1992,” about Italy’s watershed Clean Hands corruption probe, and its two subsequent seasons, and more recently crimer “Though Shalt Not Kill,” a hit on pubcaster RAI that plays outside Italy on streaming service Walter Presents.

The show, which breaks new ground in Italian TV, is being produced for Sky Studios by Lorenzo Mieli’s shingle The Apartment and Mario Gianani’s Wildside, both Fremantle-owned companies. They are the producers behind “The New Pope” and “My Brilliant Friend.” Zingaretti’s own Zocotoco shingle is also part of the show’s production team. Zingaretti worked closely with the writers.

Joining Zingaretti as Testori on “The King” are Isabella Ragonese (“Rocco Schiavone”) who plays a San Michele prison police agent; Anna Bonaiuto (“Loro,” “My Brother is an Only Child”) as the prosecutor investigating the web of illegal connivances that lead back to Testori; Barbora Bobulova (“Pure Hearts”) as Testori’s ex wife; and Giorgio Colangeli (“Il divo,”) as the prison warden.

“The King” is set to launch on Sky in Italy in March and will subsequently play on Sky in the U.K., Ireland, Germany, Austria and Spain. Fremantle is handling international sales.