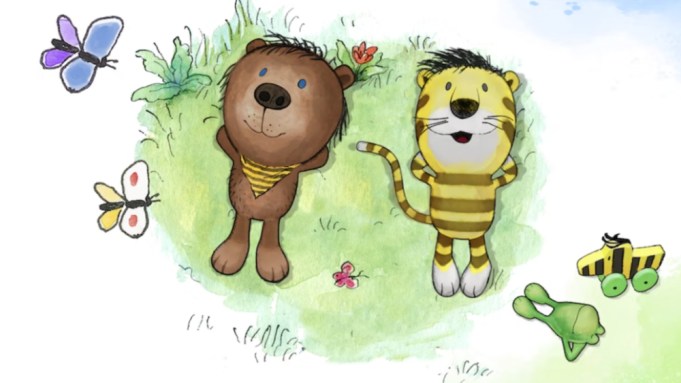 Of the 80 projects that presented at last week’s Cartoon Forum in Toulouse, no pitch attracted greater (proportional) buyer curiosity than “Tiger and Bear.”

Produced by Germany’s Wolkenlenker and adapted from a beloved children’s series from author and illustrator Janosch, the upper-preschool project saw nearly 60% buyer attendance at its Tuesday pitch and fielded effusive feedback from American, British, and Scandinavian broadcasters in the days that followed – with many keying to the project’s laid-back tenor.

As it exploring life’s smallest moments, “Tiger and Bear” follows two cuddly best friends with the tranquil tone one might call Zen for Preschoolers. “The core of the Janosch IP is simplicity, honesty and quiet wholesome wisdom,” says Wolkenlenker co-founder Sebastian Wehner.

“Janosch’s books are all about friendship. His is a quiet, serene, and friendly world full of the simple joys in life: A friend’s hug, a home-cooked meal, and the reassurance that you’re not alone. Since the world isn’t threatening, you can go out and adventure.”

“We want t draw from the many philosophical nuggets in Janosch’s original work,” Wehner continues. “In terms of pace, we also want to put our foot on the break without being boring. We think there’s room for stories told in a slightly slower tempo, leaving more room to explore.”

While Janosch’s work has inspired a number of previous adaptations, for this 3D project the series producers wanted to translate the artist’s ever-changing illustrations for the screen.

“Everyone in our generation and the generations afterwards grew up with Janosch,” the producer adds. “But that was always a tall order because in several markets it’s really a heritage brand, so you have to find the right angle and the best way to refresh it. What can you add to something already so beloved by millions of people?”