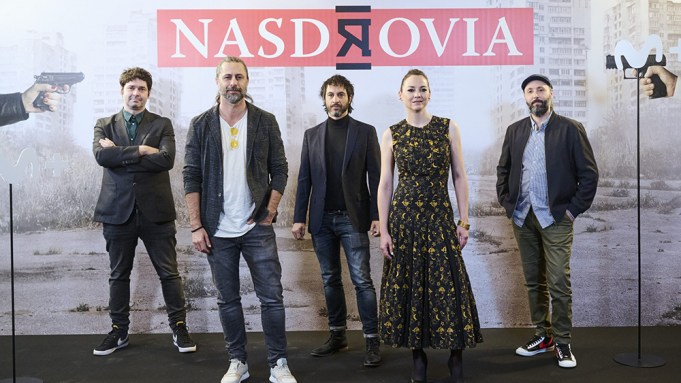 Eliza Rycembel, star of Oscar-nominated “Corpus Christi,” and Panos Mouzourakis, whose credits include “Mamma Mia! Here We Go Again,” have joined the cast of “Nasdrovia,” Season 2, which bows Feb. 25 on Movistar Plus, produced with The Mediapro Studio’s Globomedia – a powerful partnership of two of Spain’s biggest content creators.

Variety has had exclusive access to a behind-the-scenes trailer where Rycembel and Mouzourakis talk about their characters, both contract killers: George, played by a tongue-in-cheek Rycembel and Mouzourakis’s Ringo, a charmingly ridiculous ‘70s throwback who, as he comments in the video, wants to take George under his wing, but still show her “who’s the man in the house.”

Season 2 continues the downward spiral of Edurne (Leonor Watling) and Julian (Hugo Silva). In Season 1, they suffer a midlife crisis, abandoning careers as lawyers to the rich and corrupt to run a Russian restaurant, only for the establishment to become a home from home for the Russian mob. Now guilty of complicity to murder, in Season 2 their main goal is just to stay alive. This time around, a few assassins are thrown in the mix resulting in a chaotic culture clash in the midst of some very shady sometimes brutal business.

“This season there’s a very logical evolution in the series and its characters,” remarked Sergio Sarria the author of the novel “The Man Who Hated Paulo Coelho” which inspired the series. “As the protagonists try to cope with their situation we could plumb – aesthetically and stylistically – darker territories.”

Written by Sarria,  alongside Miguel Esteban, Luismi Pérez and showrunner Marc Vigil, the series had already established a singular tone, subverting expectations by depicting menial, banal details about the mobsters in between the trafficking and murders.

Add a touch of drag racing, a twist of Spanish picaresque and a lot of violent gangsters the result is a comedy that has been embraced by Spanish critics for its sharp wit, while horrifying with the cold brutality of some of its characters.

As Pérez noted, “They might have seemed friendly and funny in the first season but at the end of the day these are gangsters who don’t blink when resorting to violence.”

Vigil added: “We’ve been able to experiment more and find the right tone and balance where we’re comfortable and where the series really shines. At the end we channel very clear references such as ‘Fargo,’ ‘The Sopranos,’ even, I’d say, the world of Tarantino, depicting the mundane daily life of the criminal underworld, giving it a sense of humanity.”

John Hopewell contributed to this article.