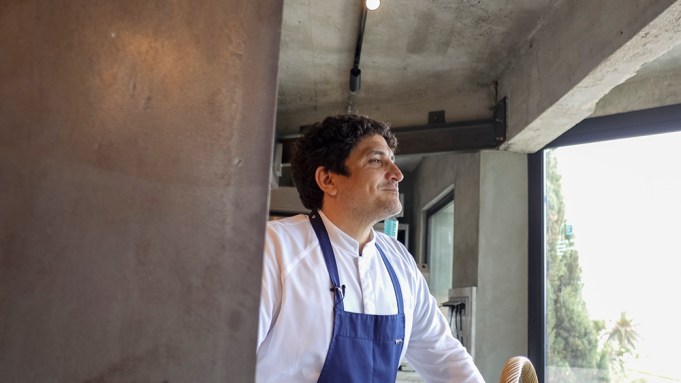 Chef Mauro Colagreco of the three-Michelin star restaurant Mirazur will be attending the June 13 North American premiere of the documentary “Reinventing Mirazur” at the Tribeca Film Festival.  In a clip released ahead of its premiere in Variety, Colagreco explains the new philosophy behind the restaurant’s menus, borne out of the pandemic.

As described, the doc takes “a deep dive into the life of Chef Mauro, who finds himself changing everything about his flagship restaurant after the COVID-19 pandemic halted his worldwide rise to prominence.”

Forced to go into hiatus not long after his Menton, France-based restaurant was awarded the coveted three Michelin stars and the No.1 spot in The World’s 50 Best Restaurants list in 2019, Colagreco spent more time in his estate’s vast vegetable and flower garden and came up with the idea to introduce menus pegged to the cycles of the moon. Since he sourced all the restaurant’s fresh produce from his garden, where planting and harvesting were timed according to the moon’s cycles, the menus would undergo a radical change.

Expressing his pride at presenting the feature doc at Tribeca, Colagreco commented: “These last two years were quite special and unique and will always be remembered by the Mirazur team and my family. With directors Franck and Vérane we went through this period with a lot of doubt and fear but we also shared some beautiful moments that this movie captured incredibly.”

“Reinventing Mirazur,” which had its world premiere at the San Sebastian Film Festival last September, follows the Argentine-born chef as French filmmakers Franck Ribière and Vérane Frédiani (“Steak Revolution,” “A La Recherche Des Femmes Chefs”) film him as he participates in the Cook Japan event organized by restaurateur Yuji Shimoyama. From there they visit his Menton restaurant and what started out as an idea for a short film expands into a feature-length documentary as they bear witness to his existential crisis and his decision to completely reinvent his restaurant.

Speaking to Variety at San Sebastian, Colagreco noted that in effect, Mirazur was now four different restaurants in one, as menus changed with each primary lunar phase. “But in terms of experience and innovation, there’s nothing better; it’s more poetic, it’s a return to nature.”