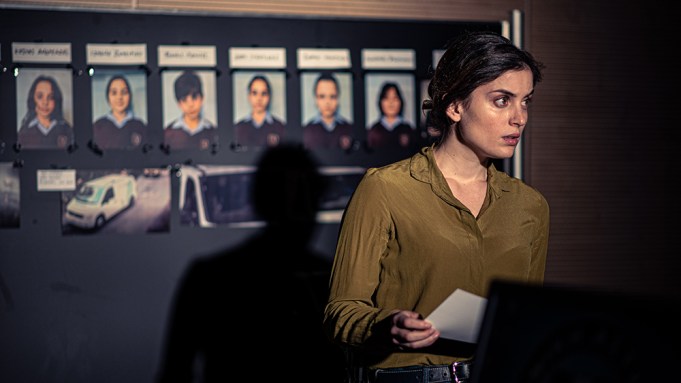 Written by Melina Tsampani and Petros Kalkovalis and directed by Vardis Marinakis, the series dissects the entangled lives of an affluent family in Athens after a school bus carrying their children is held hostage, the kids and bus drivers inside being abducted and held for ransom. A slight nod to the eerie legend, turning on the Pied Piper of Hamelin, the town must come to grips with the event while police dig into the crime, desperate to resolve the atrocity.

“While shaping the idea for ‘Silent Road,’ we wanted to use a fairytale in the narration, as a bridge that connects the world of adults to that of the children. The Pied Piper of Hamelin is a dark fairytale about trust and revenge. It addresses issues that we’re also dealing with, in our story,” remarked Kalkovalis. “However, the fairytale didn’t work as a foundation for ‘Silent Road,’ despite the similarities. It was more like we‘d found our common ground with it in the process of exploring the original idea.”

The trailer opens with a birthday celebration for the commanding patriarch of the Karouzou family, his children, and grandchildren, enormous cake in hand, singing his praises with subtle elation. He blows out the candles and the ominous title track, from Ted Regklis, begins as an establishing aerial shot of the town takes over the screen.

An abduction takes place and we witness the innocence of the children turn to uncertainty as they become the unlikely pawns in a precarious game.

The trailer wraps teasing high-tension and the bravery of youth as deep family secrets come to light. By presenting an array of fragmented perspectives, the series touts multiple plot lines between the distinguished family, their children, criminals, and working-class folks from around town twisted up in the plot as the story slowly unravels at a gradual yet true-to-life pace.

Sympathy is sought, and often gained, as the titular characters display their fragility at every turn. Through grief, blame, and self-doubt, the family battles for answers. Touching on the completely unhinged nature of the privileged and the pauper when pushed to the brink, social structures are called into question, the elite and working-class each struggling to avoid collateral damage.

“One of our main goals in the script was to infiltrate the emotional background of our heroes. To create complex characters, who – as the story evolves – reveal their true selves. Sooner or later everyone has to face their past, their mistakes and guilt. Victims become the perpetrators and vice versa,” said Tsampani.

She added: “We wanted this feeling of complicity to be present throughout the series and enhance the anticipation for the reasons and the outcome of this case. The class issue is also addressed a large deal, in the sense that no one is safe and protected, as powerful as they are. When you do harm, it will come back to you one way or another.”  Produced by Mega TV and Filmiki, the 13-episode crime drama looks like it has the potential to become a widely-appealing and riveting account of despair.

Reflecting on the passion he felt in directing its production, Marinakis mused, “When I read the script, the first two episodes actually, I was electrified. I felt very strong emotions about the main characters and I was really triggered by the main set up. I was approached to make a Swedish Noir-style limited series and this direction combined with the story gave me a series of dark images and low key performances combined with a slow-burn fire inside the character souls. All these cinematic elements were new to Greek TV.”

He went on: “When you direct something you have to confront reality and learn to navigate through every kind of obstacle and the limitations of the budget. In some cases, when limitations force you to find an alternative way, something very beautiful and creative can come out of it.”

The cast is composed of venerable Greek actors, including Penelope Tsilika, Dimitris Lalos, Christos Loulis, Antonis Kafetzopoulos, and Anthi Efstratiadou, who navigate their roles with complexity.

“Steven Frears, who was my tutor at the National Film School in the U.K., always said that acting is 95% casting. By that, he meant that by carefully selecting the actors you have a guarantee for the end performance,” Marinakis said.

“In ‘Silent Road,’ we carefully chose, with the casting director, the actors that could portray this dark and passionate universe and when they all came together something happened and they felt they were part of something very special and gave their souls to the project,” he concluded.

“Improvising and always having a window open during such a complex shoot can create tension, but the overall result, I believe, pays off.”