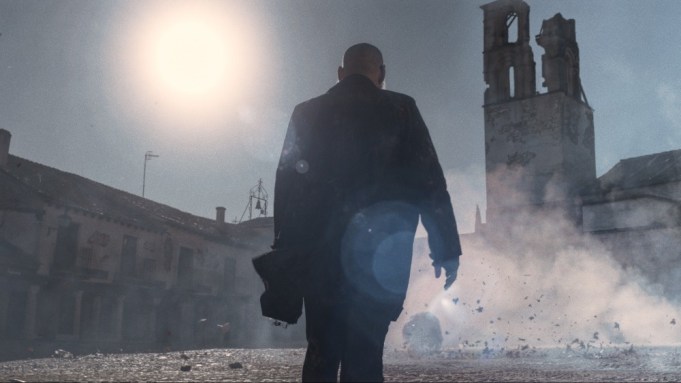 HBO Max has revealed that principal photography has begun on a second season of its cult Spanish horror series “30 Coins,” from genre maestro Alex de la Iglesia, following an eight-episode commission. Shooting for the globetrotting series will take place in Spain, Italy, the U.S., France and the U.K., with the second season scheduled to launch in 2023.

HBO has also released a grim teaser to mark the occasion which includes a brief glimpse of Eduard Fernández’s Padre Vergara, looking worse for ware after the events of Season 1 in which the disgraced priest fled to a small Spanish village to escape the demons of his past and hide one of Judas’ 30 silver coins. Legend has it that bringing the 30 together will kick-start the apocalypse.

A hit in its native Spain, the series also found success abroad as its became available on the WarnerMedia-owned streaming platform in more territories. Rumors of a second season have been around since last September, when de la Iglesia and Pokeepsie Films, his production company, tweeted photos of the director in the quaint Pedraza city square where the action in “30 Coins” kicked off, and the words “Coming back.” In today’s teaser, that same square doesn’t look to be faring much better than Father Vergara himself.

But, questions loom. Is Father Vergera in the real Pedraza square, or some alternate version? Is he even alive? What about his arch nemesis Cardinal Santoro?

As Season 2 picks up, several citizens of Pedraza have gone mad and been committed to a psychiatric hospital. Elena (Megan Montaner) is bedridden in Madrid while Mayor Paco (Miguel Ángel Silvestre) does his best to care for the veterinarian-turned-demon-hunter. According to the scant details available thus far, Season 2 promises a new kind of enemy altogether, one which instills fear into the Devil himself.

“30 Coins” was created and is co-written by de la Iglesia and his long-time creative partner Jorge Guerricaechevarría. Other popular films on which the two have partnered include the apocalyptic holiday classic “The Day of the Beast” (“El día de la bestia”), “Witching and Bitching” (“Las brujas de Zugarramurdi”) and de la Iglesia’s English-language thriller “The Oxford Murders,” starring Elijah Wood and John Hurt.

“If the first season was the gathering of the storm clouds, the second will be the maelstrom preceding an epic storm. The characters are involved in a hellish plot, where death and resurrection are two sides of the same coin” said de la Iglesia in a release.

Antony Root, executive VP and head of original production for WarnerMedia International and executive producer for HBO Max added: “After seeing how much our audience loved season one, we couldn’t resist returning to the 30 Coins universe. It’s safe to say that Álex has gone even bigger and bolder for season two, so hold on to your hats, we are in for another wild ride!”