Sydney Sweeney has had a breakout year, stealing the spotlight on two HBO shows: as the insecure, self-destructive Cassie on “Euphoria,” and as the withering mean-girl Olivia on “The White Lotus.” Christina Ricci elicited a combination of laughter and terror as the macabre, damaged Misty on Showtime’s genre-defying survival drama “Yellowjackets.” When the two actors meet, for Variety’s “Actors on Actors” presented by Apple TV+, they discuss their characters’ varied traumas; how life on sets has changed for young women, particularly when it comes to sex scenes; and being memes.

CHRISTINA RICCI: We’ve both played characters that have turned into memes. Olivia’s a meme. Cassie’s a meme.

SYDNEY SWEENEY: Misty’s a meme. Do you like it?

SWEENEY: Sometimes when I’m texting my mom, I send back memes of my characters as replies.

RICCI: Oh handy! What Cassie goes through is so incredible in Season 2.

RICCI: It’s a performance that you can make into a meme, or make it camp. But the way you played it was never camp — it was so real that that’s where the ridiculousness came from. I feel like I do know how difficult that is.

SWEENEY: You’re like, “Oh, she’s crazy, or she is fanatic — and she’s just emotional.” But there’s so much going on in her brain that it’s emotions that she’s actually feeling.

RICCI: And there were so many moments that were really uncomfortable and painful, and it is like just the uncontrolled emotion of a teenager.

SWEENEY: Cassie is dealing with trying to love herself in a moment where she does not love herself, and she’s looking for that from other people. And it’s so hard when you don’t know who you are.

RICCI: It was like she’s regurgitating all of the negative things as women that were taught culturally, you know?

SWEENEY: She doesn’t know how to communicate without showing her body. That is a form of communication for her, and she was never taught that you did not need that.

SWEENEY: There is a manipulative side of Cassie — and I think she’s found that through Nate. She’s starting to realize that she can control him with fear, and she’s never had that aspect before because she’s always been the one that’s been fearful. Can we please talk about “Yellowjackets”? I haven’t had nightmares in a really long time. I had nightmares after watching the first couple of episodes. 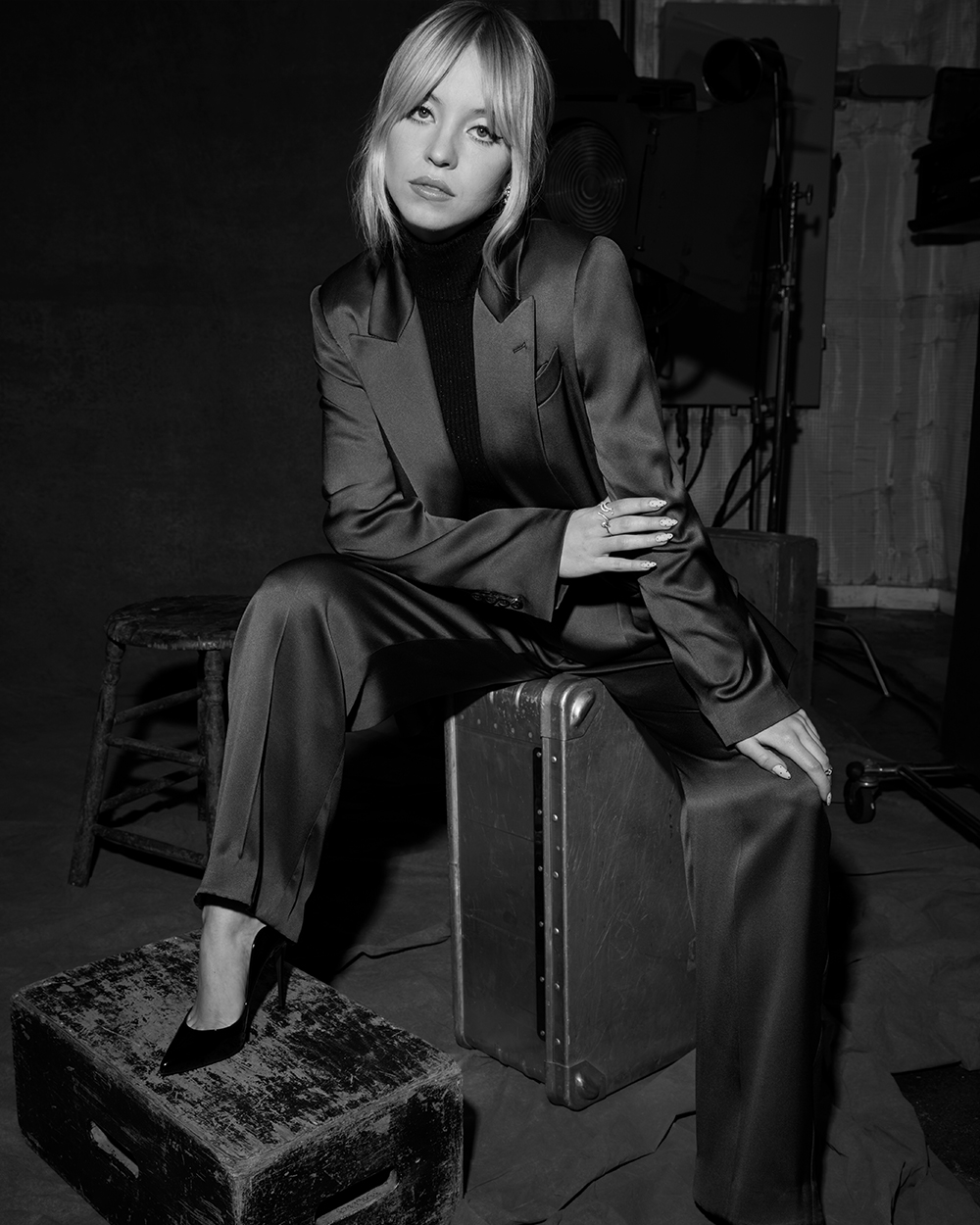 SWEENEY: But it’s amazing. You guys are doing incredible work and I absolutely love Misty: She’s crazy. Do you love playing crazy?

RICCI: I do. I’m a bit of a contrarian, so I’ve always enjoyed — almost in an immature, rebellious way — playing people that you are supposed to hate. And that’s of course just me being a jerk. You were saying if you played Cassie in a way where she wasn’t grounded in extreme pain, you could dismiss the character. I feel like Misty is a similar sort of situation.

SWEENEY: I felt so bad for her.

RICCI: Well, that’s it. It’s just on the edge of camp. And she is the comedy in a lot of the scenes, so my real desire and struggle and whole intention was to just have it all be grounded in reality, and have her be somebody that you might have seen that person on the street and been like, “Oh, what a weirdo” — but this is what’s going on actually inside that weirdo. Even her appearance is very extreme. So you didn’t feel like you related or were similar either to Olivia in “White Lotus” or Cassie on “Euphoria”?

SWEENEY: Olivia’s very different from who I am and my upbringing.

RICCI: As an older woman, I was like, “Yes. That is the young woman that I am terrified of. The one who is judging me, and mean, and thinks I’m lame.”

SWEENEY: Oh yes. I mean, I was scared of her, doing her.

RICCI: What was the rehearsal process like on that one?

SWEENEY: We didn’t really have any rehearsal process. We were all flown to Hawaii. It was in the middle of lockdown. The hotel was still closed, and we had the entire resort to ourselves while we were filming. And so we quarantined for a couple days, and then we went right into it.

RICCI: Is there improv with Mike White?

SWEENEY: A little bit, but I have to say Mike is — he is so fantastic in how he creates these voices for these characters. It’s almost like he’s lived every single life, because it’s so on point. Mike would let us live in scenes and play, but we never felt like we had to change his writing.

RICCI: What’s the situation like on “Euphoria”? Do you stick to scripts tightly?

SWEENEY: Sam Levinson allows us to kind of develop our characters with him and follow the process. Everyone puts so much time and heart and energy into the show, and it’s really beautiful to be able to see that.

RICCI: So that does bring me to the sex scenes, which I’m sure you’re sick of talking about. It does seem like you guys have so much ownership in what you’re doing.

SWEENEY: It’s a very safe environment. I’m very fortunate that I am coming up during a time where there is so much thought in this process, and we now have intimacy coordinators.

SWEENEY: It’s really interesting, because it’s kind of like a stunt coordinator for a sex scene. They bring in tools.

RICCI: No way. Stop it. What kind of tools?

SWEENEY: Sometimes there’s yoga mats that you can put in between each other. Or there’s like pads that you can put, or yoga blocks — there’s some weird stuff. And even if you have agreed to something, they ask you on the spot on the day, “Did you change your mind? Because you can.” It’s really nice. I’ve never felt uncomfortable.

RICCI: I haven’t done a sex scene in a couple years. I’m at that age where they don’t ask you to do them so much anymore. I mean, I don’t really enjoy them.

SWEENEY: I have weirdly become very confident with my body through Cassie.

RICCI: I was going to ask you about that, because there’s so much nudity. Once I had to do a movie where I was naked pretty much the entire time. The thing that made me more uncomfortable was other people being uncomfortable with me being naked. So what I did, and you probably wouldn’t be allowed to do this now — I just stayed naked. I was like, “Don’t make me feel weird, like I’m the person who has to be ashamed.” I would talk to crew members naked.

RICCI: I wanted everybody around me to stop reacting to it, because then I would forget that I was naked. And it worked. But it’s one of the only times I’ve ever actually really felt comfortable being naked on camera.

SWEENEY: I have to say, it’s kind of like a power move.

RICCI: Throw my five-foot-one stature around here. “You’re going to have to look at my boobs. Sorry!” I read a few of your interviews and saw you on “Ellen.” I just thought to myself, “Oh gosh, she must be so sick of talking about being naked and having sex on camera!”

SWEENEY: There’s a lot of conversation around it, and so much fascination, but then not enough conversation about the violence that’s on TV all the time.

SWEENEY: There was a storyline of what is happening in Cassie and the sexualization that’s happening in Cassie because of her nude photos that got leaked, and just the perception of others on her because she has boobs. I see that happening to me in real life, even though everyone watched “Euphoria.” I go, “Did you not learn?”

RICCI: “Did you miss the point?” With the conversations that were had on our set about intimacy and people’s comfort, it was the first time I realized that things have really changed, and women are now allowed to say, “I’m not comfortable.” I mean, I remember once on a movie saying I wasn’t comfortable with something and they threatened to sue me if I didn’t do it. That would never happen now.

RICCI: It was fine. I didn’t do it anyway. And they didn’t sue me.