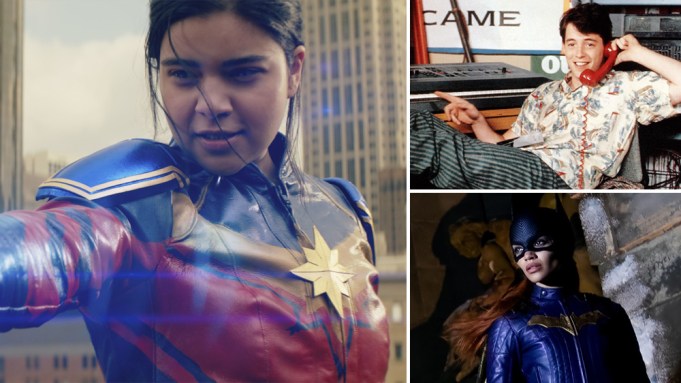 Even superheroes have to pass their driver’s ed classes, and nobody in the Marvel Cinematic Universe feels that more than “Ms. Marvel” herself, Kamala Khan.

Played by 19-year-old Iman Vellani, Kamala learns how to control her mysterious, energy-projection powers while balancing the challenges of high school guidance counselors and traditional parents who won’t let her stay out too late. If that sounds like a cross between a typical Marvel movie and a coming-of-age John Hughes movie, that was exactly the plan.

“All the John Hughes movies, like ‘Ferris Bueller’s Day,’ are obviously a reference,” director Adil El Arbi told Variety. “The TV show ‘Parker Lewis Can’t Lose,’ which is based on the John Hughes movies, Tom Holland’s ‘Spider-Man’ movies, all the American high-school TV shows, like ‘Saved by the Bell,’ ‘Boy Meets World.’ We tried to convey that style.”

With his directing partner Bilall Fallah, the duo make up Adil & Bilall, who previously helmed 2020’s “Bad Boys for Life,” starring Will Smith and Martin Lawrence. On “Ms. Marvel,” the two directed the first and final episodes of the superhero show, which premiered on Disney+ on Wednesday.

“Ms. Marvel” director Meera Menon — who helmed episodes of “The Punisher,” “For All Mankind,” “Outlander” and more — cited recent young-adult, slice-of-life films like “The Edge of Seventeen,” “Lady Bird,” “Booksmart” and “Easy A” as inspirations. For Episode 2 of “Ms. Marvel,” which will introduce Kamran (Rish Shah) as a new student Kamala has a crush on, Menon included references to the pool scene in “Fast Times at Ridgemont High” and Jake Ryan and his car from “Sixteen Candles.”

“There was a lot of excitement from the creative team to harness the charm and the magic of that time period of your life and the feeling those movies give you,” Menon said.

Along with all the teenage influences, “Ms. Marvel” is peppered with comic-book animations and doodles that pop up when Kamala is daydreaming (which, as a high schooler with an active imagination, happens a lot).

“‘Into the Spider-Verse’ was a big reference,” said El Arbi. “It’s one of our favorite movies. What if we could do a live-action version of that? We came up with the animation and comic-book aesthetic, trying to get inside her dream world — like ‘Scott Pilgrim’ also.” He added that not only were the doodles not in the original scripts for the show, they’d never appeared in any prior MCU title. “So we really had to try to convince Kevin Feige and Marvel to allow us to do that.”

Jumping across superhero universes, Adil & Bilall are also hard at work on the DC Comics adaptation “Batgirl,” starring “Into the Heights” breakout Leslie Grace. The film is slated to release on HBO Max later this year, and despite taking place in different comic-book worlds, the two superheroes have a lot in common, the directors said.

“For both, it’s an origin story,” Fallah said. “They have to grow and find a way to be who they have to become — a superhero. On the other hand, it’s totally different. ‘Ms. Marvel’ is so teenager, super colorful and young, and then you have ‘Batgirl’ in Gotham City with Batman, which is darker. Their journeys are similar in that they have to learn to become a superhero and take responsibility and grow.”

And what would happen if Ms. Marvel and Batgirl crossed universes and met up?

“They would be best friends, no doubt,” said Fallah. “Whether it’s Gotham in the darkness or Kamala Khan in her hero world, they’re fun, cool, very endearing and charming.”