For two decades, Melanie Lynskey has graced our screens both large and small. Maybe her most famous role was as Rose in Chuck Lorre’s “Two and a Half Men” — she appeared in 63 episodes of the sitcom alongside Charlie Sheen and Jon Cryer. She later led HBO’s “Togetherness” and Hulu’s “Castle Rock.” In 2020, she portrayed Rosemary Thomson in nine episodes of FX’s “Mrs. America.” Suffice to say, it’s a bit of a surprise that she has a reputation of saying “no” due to her “terrible commitment-phobia.”

“It scares me to think of signing up for something that is hard for me to get out [of],” she says, recalling landing the role on the CBS series in 2003. “Two years in, I said, ‘I don’t want to be a regular anymore.’ And it was complicated. I was very lucky that Chuck Lorre allowed me to do that and worked very hard to get me out of my contract, and then kept bringing me back and allowed me to pay my mortgage for 10 years. Contractually, getting out of a show that’s doing well is tough. So ever since then, it’s been terrifying. I haven’t said yes to very many things.”

But she couldn’t say no to Showtime’s “Yellowjackets.”

After speaking with creators Ashley Lyle and Bart Nickerson, she was impressed by how much there was to explore with the character of Shauna, a woman who, 25 years after surviving a plane crash, is still reeling from what happened and hasn’t ever been able to fully move on. 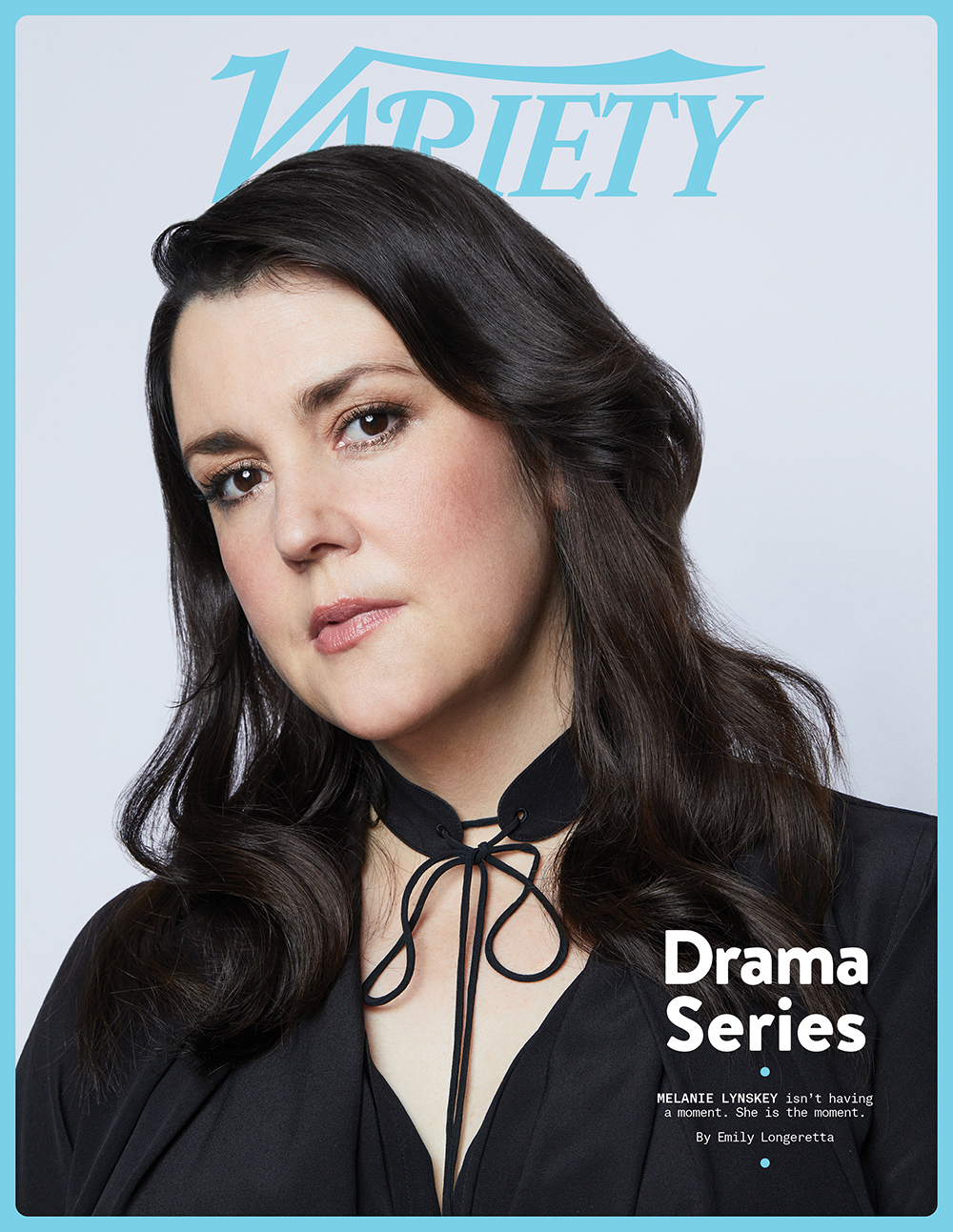 “They had so many focused ideas. They had a plan. They know these people; they know these characters. I felt like there was five years’ worth of interesting material,” she says of how she felt following their first meeting. “I was the first person cast and then I would just hear about everybody else who was cast. We just got very lucky that they were nice people and people I wanted to hang out with. We got extra, extra lucky with our crew, who were just very passionate about the show and genuinely loved the show.”

When Lynskey chooses a role, she considers many different elements — but mostly it’s about how the character makes her feel.

“It’s kind of like putting on a dress and you know if it’s comfortable or not. You’re like, ‘Oh, God, I’m not gonna want to wear this,’ or ‘OK, this feels good.’ Something kind of happens when I feel like I’m in it. Shauna sometimes feels very different for me. Sometimes Shauna feels like my ideal, what I hope I become one day.” She quickly adds with a laugh, “without all the murdery bits!”

Lynskey continues: “The confidence and the toughness, I don’t think I have.”

Still, she found a way to tap into her character. That said, she’s a big believer that Shauna would have a much better life — but maybe not as great of a storyline for TV — had she let herself open up.

“We all know people who could really use therapy. I think everybody could use therapy. There are some people where you’re like, ‘Gosh, if you’ve gone to a room and talked through some of the stuff that would really help you.’ She’s one of those people,” says Lynskey. “There’s so much that she has been terrified to discuss, that she’s never talked about with anybody, that she’s holding very close that fills her with shame, fills her with regret, and she’s just not processing anything ever. She’s just kind of pushing forward and moving on and then things will crop up and she’ll push them back down.”

In that way, she and Shauna are completely different, which was another reason she wanted to play the part.

“Part of what I love in my work is that I do get to process stuff! Sometimes I don’t even know what I need to go through. I’ll just be like, ‘Oh, for some reason, this job was really interesting to me.’ After the fact, I see what I needed to work out with that one. But I’m always processing and in my everyday life, I cry all the time and talk about things as they’re happening. I can’t make small talk,” she says. “All I want to talk about is people’s trauma and terrible things that happen. So, to be playing somebody who’s just not talking about anything and not dealing with anything is really hard because there are some times when I would want to have a big cry if I was that person. She just doesn’t allow herself.”

While Lynskey portrayed the adult Shauna, Sophie Nélisse played the teen version. From the start, they had no interest in mirroring each other, as they knew that had the potential of holding each other back.

“I trusted energetically that it was right. She feels like the other half of this character,” says Lynskey. “Sophie had more hesitations because she’s blond and blue-eyed, she had to go through a lot more physical changes than I did. She didn’t look like herself and she felt awkward initially, and then I think she realized it did work.”

It was helpful for Lynskey to watch the weekly table read over Zoom and see how Nélisse was acting in certain situations.

“That was kind of where my own performance was kind of informed by hers because I could see what the beats were that she was connecting with the most deeply in the episode and how she was going through things,” she says. “To witness your young self acting out these things, the episodes are all connected — whatever they’re going through is coming back up later in life. So that was incredibly helpful to see her playing all those beats. She’s just so good.”

Lynskey was continually moved by the rest of the cast, noting that any of the actors in the show could carry their own series. As she formed a bond with the other actors portraying the adult versions of the teens — Christina Ricci, Tawney Cypress and Juliette Lewis — she began referring to the four of them as “the old ladies.”

“I don’t think the other three are as excited about that title, as I am, but I’m just gonna continue to use it,” she laughs.

While COVID-19 created a tough situation for everyone both personally and professionally, it had a silver lining that benefited that entire group. “We, the old ladies, did not know each other before really. We just really decided from the beginning that we would know a lot about each other. We’re gonna really try to get to know each other. We had a few lunches and stuff like that, and then we also were sending video messages to each other, just chatting about how things were going at work. That became talking about our lives and just unfolding our histories to each other,” recalls Lynskey. “It was kind of perfect because we all ended up recording them late at night when our kids had gone to sleep or at the end of a long day when all our defenses were down, and we got very honest.”

That bond, and the fact that the four actors hadn’t spent a ton of time physically together, worked perfectly for their characters, who also hadn’t been in the same room for years.

“They don’t have physical intimacy that you’d have with your very best friend or that kind of easy conversation, but they do have a deep, deep history,” she notes of characters Shauna, Taissa, Misty and Natalie. “So for us to have not really hung out that much, but to know all of each other’s secrets, was kind of the perfect thing. When we were working together, we were so excited to finally be in scenes together. We just knew each other very well and trusted each other a lot.”

While the character of Shauna was nothing like Lynskey, her next role was a bit closer to herself — even though she didn’t get much rest between the series.

“I got the offer for ‘Candy’ with a month to go on ‘Yellowjackets.’ I had about three weeks between the two,” she says of signing on to the Hulu limited series.

The five-episode true crime drama tells the story of Candy Montgomery, portrayed by Jessica Biel, a Texas housewife who murdered her neighbor with an axe. Lynskey stepped back in time to transform into that neighbor, Betty Gore.

“Betty unfortunately is a lot easier for me to act because I’m a person who has tended towards depression at times and I am very, very shy. I’m not sure of myself at all. I’m filled with self-doubt a lot of the time. I’m working on it and doing my best. But it’s a lot easier for me to play that person than to be not feeling especially confident and then have to go and play somebody who was filled with confidence.”

Lynskey was able to empathize with and fully understand Betty; although tapping into her was less of a challenge, the actor feels it was an extremely important part for her to play.

“I needed to do it. I needed to get into that aspect of Betty to really be like, ‘Is this as big a part of me as I still think it is? The self-doubt and the shyness?’ I kind of realized I think I am a little bit beyond that. [I thought,] ‘I think I’m a little bit stronger than this.’ That was an interesting thing to realize about myself.”

The drama also provided a surprise for her fans: Jason Ritter, her real-life husband, popped up in the show as a police officer working alongside Biel’s husband, Justin Timberlake. After Timberlake read the script, he begged to be part of it. Once he was in, creators Nick Antosca and Robin Veith came up with the idea to bring in Ritter.

“Our heads exploded. It was so funny. We just laughed so hard about the idea, and it just turned out so beautifully,” Biel told Variety. “Those two should have their own cop-buddy comedy. They’re so funny together. We already know Justin is like a comedic genius. Jason is unbelievable. I mean it’s not a surprise, but wow. It was amazing to watch them work together.”

Although Lynskey and Ritter weren’t able to share the screen — her character had been murdered by the time his was introduced — she feels he made her look good.

“He’s such a wonderful actor and a really nice person. When I came back to work, everyone was like, ‘Your husband is the nicest person!’ It makes me look smart, like I chose a great partner!”

Just as Biel said about working with Timberlake, Lynskey hopes she and Ritter can work together again on screen if they can find the right project.

“He’s so good, and it’s really fun to get to work with somebody who is creative and interesting and does something different every take, which is what he does. He’s also so good at improv. It’s hard though because we try to support each other when the other one’s working. If we both were working on something full time, that would be tough. I already feel like our nanny is working so hard when I’m at work!

“With two high-profile shows in contention this season — and a Critics Choice win under her belt for “Yellowjackets” — Lynskey’s more surprised and humbled than anything. When congratulated on her massive 27 year, she quietly notes, “I just feel so lucky.”