Inside ‘Inventing Anna’: Julia Garner Performed Delvey’s Accent to Her, and Anna Chlumsky Learned How Easy It Is to Scam

When a story about a faux-heiress called “Anna Delvey” first appeared in New York Magazine in May 2018, actor Julia Garner was among the voracious readers who pored over journalist Jessica Pressler’s account of how Anna Sorokin, a twentysomething Russian-born German woman, had scammed her way into the top branches of New York business and society by pretending to have a $60 million fortune.

“I had the same reaction that the whole world had,” Garner recalls, telling Variety she read the piece, titled “Maybe She Had So Much Money She Just Lost Track of It,” the week it published. “Then two months later, when I heard that it was going to be a series, I was not surprised about it at all. It’s an amazing story.”

But what did surprise the actor was that she landed the part in “Inventing Anna,” the Shonda Rhimes-created Netflix limited series. “I knew that I could play her, but I didn’t know that Hollywood would be able to see that,” she says.

Fortunately, Rhimes and the Shondaland producers felt Garner’s talent fit perfectly into their vision for the series, even if she looked a little different than Sorokin. To transform into “Anna Delvey,” Garner changed her hair, donned fake teeth, padded her bra and carefully crafted a German — by way of Russia — Americanized accent. To further inform her performance, Garner visited Sorokin in prison, where she performed the “Anna Delvey” accent at Sorokin’s request. But the interaction wasn’t much of a fact-finding mission for the actor.

“It was very clear to me that Anna’s a very private person. She keeps her cards extremely close to the vest,” Garner says. “I was not going to have any expectation that she was going to answer any of the questions that I asked, so I just wanted to get her spirit and energy and incorporate it into the show.”

What Garner gravitated toward was how important it was to Sorokin that her side of the story gets out. “Now she’s doing more interviews on camera, [but before that] people didn’t really hear her side of it so much,” she says. “I think it’s important to get to know the person that the people are talking about – whether it’s good or bad. It’s important for people to get to know her.”

Garner wanted the audience to vacillate between being turned off by Sorokin’s financial crimes and rooting for the character to succeed in living the high life on private yachts and jets, while doing some creative accounting to get the funding to launch the “Anna Delvey Foundation” art collective  — which she nearly succeeded in doing. “She was very, very close. She’s smart,” Garner notes.

Sorokin was convicted in May 2019 on eight counts, including grand larceny, attempted grand larceny and theft of services. She was sentenced to four to 12 years in prison, fined $24,000 and ordered to pay nearly $200,000 in restitution. Sorokin ultimately served just under four years and was released on good behavior in February 2021, before being detained again, this time landing in ICE detention for overstaying her visa. Earlier this month, she wrote an essay for Insider reflecting on her time in prison and sharing her take on the Netflix show.

“Nearly four years in the making and hours of phone conversations and visits later, the show is based on my story and told from a journalist’s perspective,” Sorokin wrote. “And while I’m curious to see how they interpreted all the research and materials provided, I can’t help but feel like an afterthought, the somber irony of being confined to a cell at yet another horrid correctional facility lost between the lines, the history repeating itself.”

“I never had the expectation that she was going to watch the project. Whether she watches it or not, I respect her decision, whatever she does,” Garner says.

The journalist Sorokin refers to is Pressler, who convinced Sorokin to give her access for what became the New York Magazine story. Pressler,  who also wrote the story that inspired the 2019 movie “Hustlers,” served as a producer on the “Inventing Anna.” But her narrative was fictionalized and crafted into a new character named Vivian Kent, played by Anna Chlumsky — who unlike Garner hadn’t heard about the “Anna Delvey” story until the Shondaland project came her way.

“I was really compelled by all of the questions [Anna’s] journey through New York has raised for all of us, especially as framed by Shonda and her writers,” Chlumsky says. “I think that they really allowed themselves to follow their own curiosity and I got to be a conduit for that.”

Since she was just discovering the viral story, Chlumsky was particularly floored by details of Sorokin’s schemes, like booking a private jet without paying for it.

“That’s a lot of the appeal to her and what she ‘accomplished’ — what she did,” Chlumsky says. “A lot of us don’t realize that sometimes it’s that simple. Obviously, she’s a very unique person to be able to pull all of it off; however, the actual [understanding] like, ‘Oh all you had to do is ask?’ That’s sort of new to a lot of us.”

In her estimation, what Sorokin did – and what “Inventing Anna” does – is pull back the curtain to reveal just how much of the VIP lifestyle is an illusion. But Chlumsky was most interested in digging into the life of a journalist to reveal the complications of trying to tell a story like this one.

Like Garner, Chlumsky checked in with her real-life counterpart “to make sure that she was pleased with the path; that I was building Vivian in a way that could reflect her own experiences with as much reverence as possible.”

She also devoured Pressler’s article and the copious notes she provided to her. But because Vivian is fictional, Chlumsky also embraced the flexibility she had to play with the character. 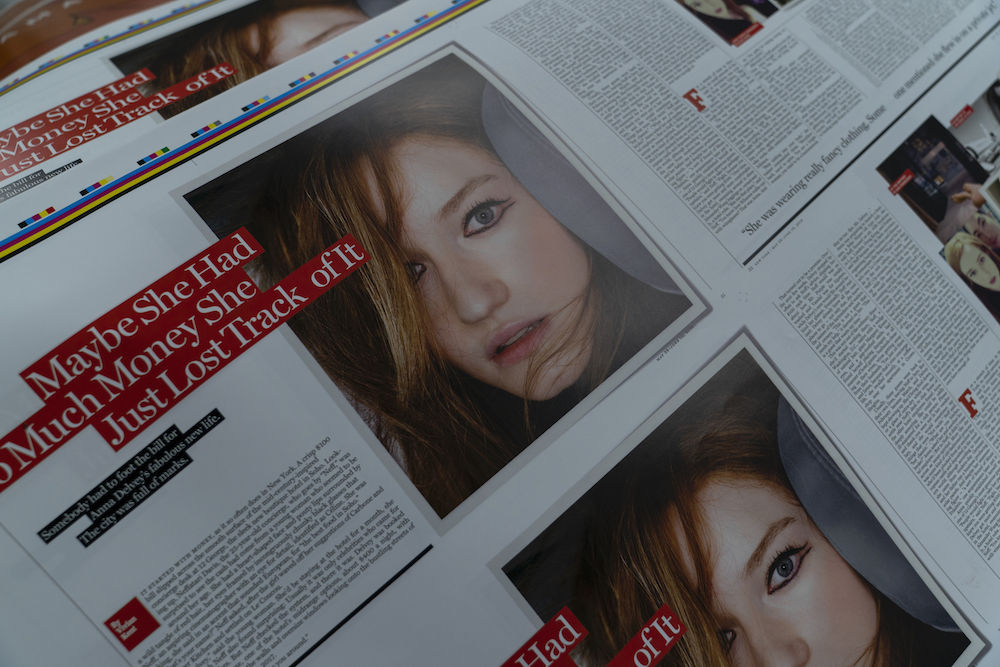 “I loved seeing [Pressler’s] process and how that turned into how she wanted to present the actual page. That gave me a sense of the motivations I needed,” Chlumsky says. “Vivian’s prevailing drive is to satisfy the unending curiosity that’s in her brain. If she has a hunch, an idea or an intuition, it’s not going to leave her alone until she has fed it enough. It’s like a beast that she needs to be guided by to let her sleep.”

The series follows the developing relationship between journalist and subject as Anna and Vivian’s lives become more intertwined during the interview process and the subsequent trial.

“We were given the bones of a fantastic dynamic to explore,” Chlumsky says of working with Garner to build the duo’s complex bond, “and it was sort of disturbing and creepy and diabolical and fun.”

“Just because you have a job, that doesn’t mean that you become a robot — you know, there’s no compartmentalization,” she continues. “For a journalistic pursuit like this where one person is a stranger asking another person to give her the most intimate parts of herself in order to shape her into a story, that has to affect you. You aren’t the same as you were before you met.”

Garner describes Anna and Vivian’s entanglement as a “cat and mouse” game. “It was a power play,” she says, noting that everyone in Anna’s story had different transactional relationships with her, from her lawyer, Todd Spodek (Arian Moayed) to her friends: Neff (Alexis Floyd), the hotel concierge who Anna takes under her wing; trainer Kacy Duke (Laverne Cox); and Rachel (Katie Lowes), a connection that turned sour and ultimately led to Sorokin’s arrest.

“It goes back to the fact that Anna wanted to people to know that she’s a real business person. It’s also this deep fear of failure, and behind the fear of failure is a deep-rooted rejection. And behind that is people struggling with identity, and how that affects one’s self-esteem. You see it every day with social media.”

Shaking the character was an interesting experience for Garner. She started playing Anna before the COVID-19 pandemic caused a global shutdown, and, when production resumed, the actor pulled double duty between “Inventing Anna” and reprising her Emmy-winning turn as Ruth for the final season of Netflix’s “Ozark.”

“I was focusing on the Ruth accent or I spoke in the Anna accent — but as soon as I was talking like myself, it started becoming a little bit of a combination of Ruth and Anna for certain words,” she says. “So only recently did I get my voice back.”

Garner also kept some of the clothes from the shoot as a souvenir. “The Alaia baby doll dress, it is a very iconic Delvey look. I don’t know where I’m going to wear that out,” she muses. “I always like taking something from the person that I played for however long, because there’s something special about that. It’s a memory.”