Continue to Variety SKIP AD
You will be redirected back to your article in seconds
Nov 28, 2022 4:13pm PT

‘Everything Everywhere All At Once’ Wins Best Feature at Gotham Awards 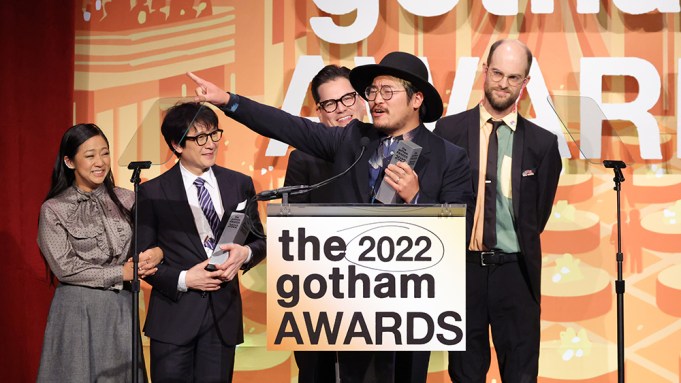 “Everything Everywhere All at Once,” a multiverse-spanning adventure, scored at the 32nd annual Gotham Awards, capturing the prize for best feature. It also nabbed a best supporting performance honor for Ke Huy Quan, a former child star best known for his work in “Indiana Jones and the Temple of Doom,” who returned to acting after a nearly 20-year hiatus.

“Oftentimes it is in independent films, where actors who otherwise wouldn’t get a chance, find their opportunities,” Quan said in an emotional speech. “I was that actor.”

Other notable winners included Danielle Deadwyler, who nabbed a best leading performance prize for her work as a grieving mother in “Till.” The Gothams’ acting prizes are gender-neutral, which meant that Deadwyler not only competed with the likes of Cate Blanchett in “Tár,” but that she also beat out contenders such as Brendan Fraser in “The Whale” and Paul Mescal in “Aftersun.”

“Tár” won an award for its screenplay, while Charlotte Wells picked up a breakthrough director prize for her work on “Aftersun,” a semi-autobiographical look at her troubled relationship with her father.

The celebration marked the official start of awards season, with many of the performers and filmmakers who are expected to be vying for major honors through the fall and winter making their first appearance on the trail. That lent an air of giddiness to the occasion, as guests table-hopped, their greetings and chatter threatening to drown out the acceptance speeches taking place a few feet away on stage.

The event, which was hosted at New York’s Cipriani Wall Street, included tributes to seasoned Hollywood veterans like Adam Sandler and Michelle Williams, as well as special distinctions given to “The Woman King” director Gina Prince-Bythewood, Focus Features and the cast of Hulu’s “Fire Island.” Sandler brought the house down reading a speech that he said had been written by his daughters, Sadie and Sunny, intoning in an exaggerated Southern drawl.

“While daddy is with you tonight, we’re doing everything we’re not allowed to do when daddy is home, like eat his Yodels or try on his Spanx or, dare we say, laugh out loud at Ben Stiller movies,” he joked. “The last time daddy caught us chuckling away at the ‘Meet the Parents’ trilogy, he immediately stormed into the room he calls ‘The Screaming Room,’ which we just call ‘the shower,’ and bellowed out the phrase, ‘Only the Sandman makes people laugh. Fuck every other comedian.’”

But the night’s tributes also took on a more somber side. Sidney Poitier, known for roles in films like 1967’s “In the Heat of the Night” and 1958’s “The Defiant Ones,” was honored with the Icon Tribute award, having died earlier this year at the age of 94. “The Harder They Fall” actor Jonathan Majors, presented the award, while reading a note that he wrote to the acting legend posthumously, paying tribute to his barrier-atomizing career.

The night also included an important reminder that the pandemic that has upended the independent film landscape remains stubbornly with us. Steven Spielberg, who had intended to give the tribute prize to Williams for her work in his new film, “The Fabelmans,” had to opt out at the last minute, replaced by Paul Dano, her co-star. The director, it seems, had contracted COVID.

“At least he got it out of the way early,” one attendee muttered upon hearing the news.

See the full list of winners and nominees below.