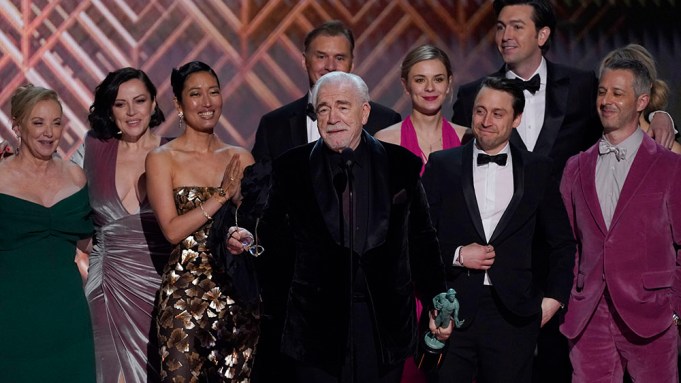 It’s going to be a wild Emmy season, and if the SAG Awards are any sort of early indication, we’ve got quite a drama race on our hands.

Think about being one of the some 150,000 or so SAG-AFTRA members and having a SAG Awards ballot in front of you — and the opportunity to make history with a few clicks. It’s exhilarating — and this year, voters couldn’t resist the allure of breaking new ground with “Squid Game.”

I had the sense early on in the evening that SAG voters were in a history-making mood, when on the film side, “CODA” star Troy Katsur and “West Side Story” star Ariana DeBose won the first two awards of the night. Katsur became the first deaf actor to win an individual prize at the SAG Awards, followed immediately by a big win for representation with DeBose, the first Latina and Queer woman of color to win.

“Squid Game” had already scored the first non-English series to be nominated for a SAG Award, which now becomes the first to also win one, via its two stars.

Of course, that led me to get a bit overwhelmed with my predictions, and after the two actors’ win, I brazenly went on Twitter and proclaimed a sweep was in the making. Memo to self: Don’t do that, because you’ll be proven wrong.

And sure enough, a reminder that “Succession” is still a frontrunner for good reason: It’s a critical darling, and won seven Emmys last fall, including outstanding drama. “Succession” is delicious in a different way from “Squid Game,” and is generally considered the one to beat this year.

But the Emmy season hasn’t quite yet started, so nothing’s assured just yet. It’s been a while since both “Succession” Season 3 and “Squid Game” ran last fall, so the next few months will be about other dramas also making a play to be in the conversation. Among those shows on the rise: Paramount Network’s “Yellowstone.”

Meanwhile, it probably seemed pre-destined that “Ted Lasso” would win the comedy ensemble trophy, given the near-universal love for the show’s ensemble — which included individual nods for Jason Sudeikis, Brett Goldstein, Hannah Waddingham and Juno Temple.

Last year, “Ted Lasso” lost out to the final hurrah for “Schitt’s Creek,” but it did win the male actor in a comedy award for Sudeikis. He landed his second consecutive win in the category this time out.

“Hacks,” meanwhile, continues its string of wins for star Jean Smart, who picked up the female actor in a comedy SAG Award addition to her recent Emmy and Golden Globe wins.

In longform, Michael Keaton won the male actor for “Dopesick,” continuing his streak following a Globes win and putting him in a solid position for Emmy consideration. (For longform female actor, Kate Winslet won for “Mare of Eastown,” which already earned her an Emmy in September.) Keaton’s emotional acceptance speech also served as a reminder that he’s one of our actor MVPs.

Meanwhile, the SAG Awards repped yet another smackdown between HBO and Netflix: HBO landed two wins, as well as one for HBO Max, making three total for the company. Netflix earned two wins during the telecast, and the third for “Squid Game’s” stunts beforehand, also making for three total.

Also celebrating a tremendous night, of course, was Apple TV Plus, celebrating its tremendous film victory for the cast of “CODA,” and also winning two in TV thanks to “Ted Lasso.” And Keaton put Hulu on the boards with one.