‘Ted Lasso’ Wins Big, ‘Only Murders’ Gets Skunked and Lizzo Dethrones ‘Drag Race’: The Biggest Snubs and Surprises at the Emmys

By
Kate Aurthur, Adam B. Vary 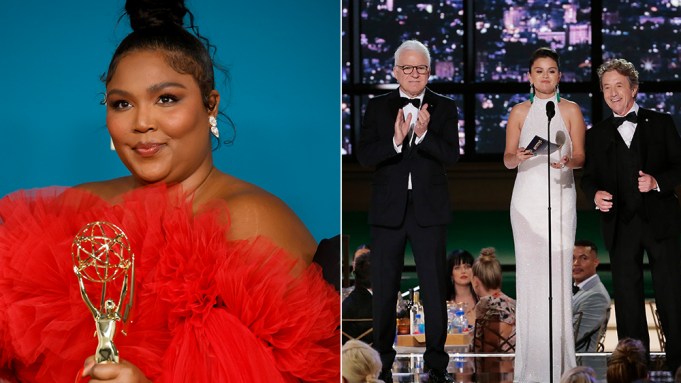 The biggest surprise of the 2022 Emmy awards is that there were almost no surprises at all. Category after category, the nominees awards experts expected to win, did win — and in several cases (Julia Garner, Brett Goldstein, Zendaya, Jean Smart), won again. The three shows with the most nominations — “Succession,” “Ted Lasso,” and “The White Lotus” — all won the top prizes in their respective categories (though one of those wins was a bit more surprising than others). For most of the telecast, the most unexpected moments came in the winner speeches (Sheryl Lee Ralph! Jennifer Coolidge!), and in the show itself (the “Good Burger” reunion!).

Ultimately, the night fell in line from the 2021 Emmys, when mega-wins by “The Crown,” “Ted Lasso” and “Mare of Easttown” made the winners at the ceremony fairly predictable as soon as the nominations were announced. Still, there were some disappointments, especially for freshman shows that broke into the nominations with a lot of buzz — but no Emmy hardware to show for it.

And those who perennially complain that Hollywood is too political had nothing to fear from Monday’s ceremony. With less than two months to go before the crucial midterm elections, there wasn’t a single political speech delivered by a winner. A surprise in itself, in the post-Roe v. Wade U.S. The closest anyone came to politics was after winning for drama, “Succession” creator Jesse Armstrong said, “A big week for successions, although there was more voting in our win than in Prince Charles’ — not to say ours is more legitimate than his.” It’s safe to say that the subject of abortion may have been the biggest snub at the Emmys of all.

Here are the most surprising developments of the night.

“Only Murders in the Building” shut out of top categories

After receiving 17 overall nominations, and going into Monday’s ceremony having won three awards at Creative Arts — for sound mixing, production design and guest actor in a comedy (Nathan Lane) — nevertheless, Hulu’s “Only Murders in the Building” was blanked in the major categories. Both Martin Short and Steve Martin were seen as favorites for comedy actor — and perhaps canceled one another out? Nothing for writing, nothing for directing, and clearly it didn’t win for comedy series either. Affects Oliver Putnam voice, and shakes fist at the sky: Nothing, I tell you!

“Ted Lasso” was by no means a lock to repeat this year. For one thing, the Season 2 finale of the Apple TV+ dramedy premiered on Apple on Oct. 8, 2021, so despite its first-season win at last year’s Emmys — and how dominant the show had been in the acting categories — Emmys pundits wondered whether voters had possibly forgotten about it. And while the second season certainly had its fans, it wasn’t greeted by the universal acclaim Season 1 had been. Also, the comedy series category was so formidable this year, with “Ted Lasso” going up against freshman sensations “Abbott Elementary” and “Only Murders in the Building,” and a nearly perfect second season of “Hacks.” And that’s not to mention past winner “The Marvelous Mrs. Maisel,” “Barry,” “Curb Your Enthusiasm” and the beloved “What We Do in the Shadows.” Tough competition, to be sure — but TV Academy voters chose to see the good in “Ted Lasso,” and make the show a two-time winner.

All the same hurdles were in front of the show’s co-creator and star, Jason Sudeikis. In another year, his fleet, soulful work on “Ted Lasso” would have been a shoo-in for a win — and it was, last year, for the show’s inaugural season. But “Only Murders in the Building” aired its second, hilarious season during voting for the work of nominees Short and Martin in their first season, and previous winner Bill Hader was a favorite by many to win for the show’s third season. Instead, Ted Lasso believed.

Two inventive newbies — “Severance” and “Yellowjackets” — are also shut out

“Severance,” the Apple TV+ sci-fi thriller, received 14 nominations in July, several of which were in major categories, several of which — outstanding drama, actor (Adam Scott), director (Ben Stiller), supporting actress in a drama (Patricia Arquette) — it could very well have won. It did receive two Emmys during the Creative Arts ceremonies (composer Theodore Shapiro for score, and outstanding main title design by Oliver Latta and Teddy Blanks). But during the Sept. 12 broadcast, it didn’t win anything.

As for “Yellowjackets,” Showtime’s genre-defying drama, one of the buzziest new shows of the season, had received seven nominations in total: for outstanding drama, directing, casting, two nominations for writing, and two for acting (Melanie Lynskey in lead actress, and Christina Ricci in supporting). Who cares, though, right? In the upcoming Season 2 of “Yellowjackets,” the Antler Queen will preside over a feast at which what’s on the menu will be select voting members of the TV Academy. Bon appetit!

With 600 scripted shows on television, there were several stacked categories going into the ceremony Monday. To us, though, drama actor was the most competitive of all. In the final weeks, Lee Jung-jae emerged as the favorite for his stunning performance as Gi-hun in “Squid Game.” But both 2020 category winner Jeremy Strong and Brian Cox were nominated from “Succession,” as warring son and father in the HBO drama. Bob Odenkirk had been nominated multiple times for “Better Call Saul” — and recently survived a heart attack! — but that wasn’t apparently any kind of advantage. As Mark in Apple’s twisty thriller “Severance,” Adam Scott received a well-deserved nomination for playing what amounts to two different characters. Nor could you count Jason Bateman out for the final season of “Ozark” — in his career, Bateman has gone from child actor to star of the beloved “Arrested Development” to starring and executive producing in Netflix’s dark, phenomenally popular drama series, for which he won a directing Emmy in 2019 — but never won for his portrayal of the brilliant, conflicted money-launderer Marty Byrde.

Lizzo, shantay, you stay. RuPaul, sashay away. After four consecutive wins for reality competition series, “RuPaul’s Drag Race” ceded the catwalk to Lizzo’s exuberant Amazon Prime Video series “Watch Out for the Big Grrrls,” in which 13 women compete for jobs as backup dancers for the Grammy-winning music superstar. (RuPaul did win an Emmy for reality competition host, his seventh, at the Creative Arts Emmys.)

The open question is whether Lizzo could repeat her win. “If I ever do another season, it will not be because of the way it was received, or whether it was critically acclaimed or not,” Lizzo said in her February Variety cover story about “Big Grrrls.” “It’s going to be out of necessity. If I need more dancers, this is the only way I know how to get dancers.” Do it, Lizzo!

Look, the fact that Seehorn finally was nominated for her brilliant, subtle, human performance as Kim Wexler — whom she played on “Better Call Saul” for six seasons — made diehard fans like us greedy for a victory. And it’s hard to begrudge Julia Garner for winning for “Ozark” — she’s won twice before, after all, and this was the show’s final season. (And a big one for her character, Ruth. No spoilers!)

Drama supporting actress was one of the tougher categories, with nominees from zeitgeist-y shows such as “Succession” (Sarah Snook and J. Smith Cameron), “Yellowjackets” (Christina Ricci), “Euphoria” (Sydney Sweeney), “Severance” (Patricia Arquette) and “Squid Game” (Jung Ho-yeon, who’d won the SAG Award!). How does one even decide? Garner killed it on “Ozark,” and her victory made her the first three-time winner since 1982 — after Nancy Marchand for “Lou Grant.”

Nevertheless, the campaign to get Rhea Seehorn the win she deserves — for the second half of the final season “Better Call Saul,” which aired in July — begins tomorrow, as it does for the AMC show itself, which has received 46 nominations over its six seasons, and had never won a single Emmy before. We meet at dawn!

Carmichael’s win for writing for a Variety Special — over the late Norm Macdonald for Netflix’s “Nothing Special” — wasn’t a shock: many Emmys pundits had predicted his victory. It’s notable, nonetheless, since in the HBO special, Carmichael publicly came out as gay. In “Rothaniel,” he said, in part: “I rebelled against it my whole life. I thought I’d never, ever come out. At many points I thought I’d rather die than confront the truth of that, to actually say it to people. Because I know it changes some people’s perceptions of me. I can’t control that.” (There are parts that are very funny, of course!)

“I made something that was of great personal consequence to me,” Carmichael said during his speech. “And this definitely contributes to the meaning of it.” He also announced he was done for the night! “I’m not a sore winner, but I’m going to go home — because I can’t top this right now.”