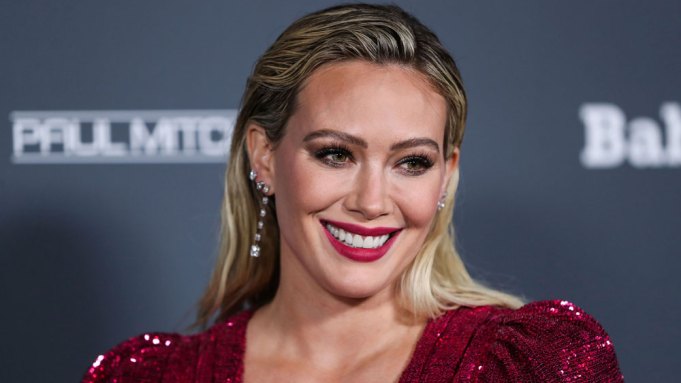 Hilary Duff‘s much-anticipated revival of “Lizzie McGuire” may have fallen apart a little more than a year ago, but all hope isn’t lost. “I don’t think it’s dead, and I don’t think it’s alive,” Duff tells me on this week’s “Just for Variety” podcast. “I think it’s just kind of sitting there.” Duff says the “Lizzie” conversations had been going on for about a decade. “I was like, ‘No, thank you,’” she recalls of first being approached. “And then one day, I was like, ‘Yup.’ There’s much love there.”

But alas, the project was nixed after Disney rejected Duff’s idea to make Lizzie’s comeback more adult than tween.

“There’s always struggle with something that’s so loved and important to so many people,” Duff now says. “I just keep my heart and my mind open. I don’t think that ‘How I Met Your Father’ would’ve come about if ‘Lizzie’ had happened.”

Duff can now be seen in “How I Met Your Father,” Hulu’s sequel to the long-running CBS comedy “How I Met Your Mother.” Duff stars as Sophie, a young woman looking for love in New York City. Unlike “HIMYM,” with its very straight, white cast of characters, the new series offers much more inclusive storytelling with people of color and LGBTQ+ representation. “We have the most diverse writers’ room. They’re having fun, and we get to reap the benefits of that,” Duff says. Former “Sex and the City” star Kim Cattrall serves as the narrator of the series, appearing as Sophie in the year 2050 to tell her son how she met his father.

Unlike Sophie, who thinks dating apps are the way to find her perfect match, Duff is happily married to her second husband, musician Matthew Koma, and grateful she doesn’t have to swipe left or right. “I know friends that are doing it and they’re like, ‘It’s brutal out there,’” Duff says. “I know someone who just got COVID from a guy that never called her back and then she spent Christmas alone. That kind of shit. Can you imagine?”

One thing you won’t see in “HIMYF” is COVID. “We all have COVID fatigue and I’m so happy they’re not bringing that into our world,” Duff says. “Because our show is lighthearted and fun — it can tug on the heart strings a tiny bit — but really it’s a comedy and COVID’s not funny anymore. Some of the memes are pretty funny, but we’re all over it. I think the country’s over it.”

Listen to the full interview with Duff above. You can also find “Just for Variety” at Apple Podcasts or wherever you get your favorite podcasts.

Also on this week’s podcast is Vanessa Kirby. The “Crown” actor tells me she couldn’t help thinking of her teenage years while filming “Italian Studies.” She stars in the Adam Leon-written and directed indie drama as Alina, a bestselling fiction writer who befriends a group of New York City teens (played mostly by newcomers), when she suddenly loses her memory. “It was actually terrifying because I actually really didn’t enjoy being a teenager,” Kirby says. “I didn’t know who I was. I was very emotional. I look back at it; it was quite a painful, existential experience.” She shot the film while starring in a play in London in 2017, making quick trips to New York City. “We kind of talked about maybe doing a short film,” Kirby remembers. “And then Adam was like, ‘Well, maybe we could make it a feature if we shot for enough days.’” Kirby, who earned an Oscar nomination last year for her work in “Pieces of a Woman,” begins shooting Ridley Scott’s “Kitbag” in about a month. She plays Empress Josephine (she replaced Jodie Comer) opposite Joaquin Phoenix as Napoleon. She also tells me that she’ll film her third and final appearance in the ninth installment of the “Mission: Impossible” franchise later this year.

If anyone is looking for proof that LGBTQ+ representation can change a life, look no further than Rebecca Henderson. The actor, who appears in Hulu’s coming-of-age comedy “Sex Appeal” as the wife of Margaret Cho’s character, says Ellen DeGeneres’ historic coming out was her “aha” moment. “I came out the night she came out on television,” she tells me. “I was almost 16, and I had never seen a lesbian before. I was with a friend, and I was sobbing so much.” Henderson can also be seen in the new Freeform series “Single Drunk Female” as a member of Alcoholics Anonymous (“My favorite people in the world are all people in recovery,” Henderson says), as well as a prosecutor in “Inventing Anna,” the Shonda Rhimes-produced Netflix series about real-life con artist Anna Delvey, who is played by “Ozark” star Julia Garner. A native Russian, Delvey scammed her way through New York as a fake socialite with numerous aliases and wild stories that she was to inherit a trust fund worth millions. Garner was by no means method acting, but Henderson says: “It was wild. Occasionally, she would say something to me in an accent when we were just talking, and she was going in and out of scenes.”

Off screen, Henderson is married to Leslye Headland, the “Russian Doll” writer and director who is currently working on “The Acolyte,” an upcoming “Star Wars” series at Disney Plus. Henderson insists she hasn’t hit her wife up for a part on the show and remains tightlipped on any details she may know. “I do love ‘Star Wars,’” Henderson says. “I love the Greek tragedies. I love Shakespeare. I love good and evil. And that’s exactly what ‘Star Wars’ is, but she’ll be working in her office in our house and I’ll open the door and hear, ‘You know, if the lightsaber…’ and it’s like, slam! I can’t listen to that.”

She adds with a laugh, “It’s going well.”