‘Pachinko’ Creators and Stars on Navigating Lee Minho’s ‘Orbit,’ and Spotlighting Women as ‘the Backbone of History’ 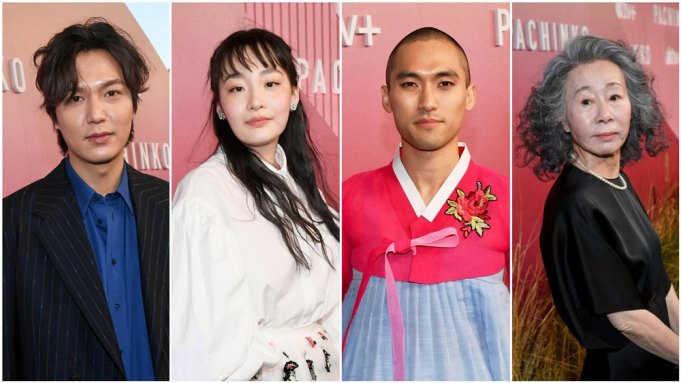 Korean superstar Lee Minho sent camera flashbulbs into a frenzy on Wednesday night at the premiere of his new Apple TV Plus series “Pachinko” at the Academy Museum in Los Angeles.

Based on the bestselling book by Min Jin Lee, “Pachinko” chronicles a Korean immigrant family across four generations, with its story centered around matriarch Sunja, played by newcomers Yu-na Jeon and Minha Kim, as well as Oscar-winner Yuh-Jung Youn. Lee plays Hansu, whose romance with Sunja changes the course of both their lives.

Despite his lengthy resume, and his worldwide celebrity, Lee Minho actively pursued the producers behind the show and auditioned for the role. On the red carpet, the actor explained why he simply had to be part of the show.

“First of all, the story was powerful. I loved it,” he told Variety. “I could really relate to the strength and resilience of the people who had to live those desperate and difficult times. And my character Hansu has his own way of survival, which is quite heartbreaking.”

Lee noted that the character is “much darker” than his previous roles: “Everyone has some kind of good and evil inside them, but Hansu is a character that goes from good to kind of bad or evil. It’s challenging, but it was different and good.”

Executive producer Michael Ellenberg sang the actor’s praises, noting that Lee gave the character “a depth and a texture that we didn’t know we could have,” especially in a dramatic episode where audiences learn about Hansu’s origins.

“He’s such an incredible star and such incredible actor, and he really saw this opportunity to show sides of himself that audiences hadn’t seen before. So he chased us; he fought hard for it … he was so brave in putting himself out there.”

Kogonada, who both served as an executive producer and split directing duties with Justin Chon, also weighed in on the Lee Minho factor.

“I mean, he’s an orbit, right?” Kogonada mused. “But what was so lovely about him is how committed he was to this particular role, and how undistracted he was because there was always fans from afar screaming his name.”

Yet, the filmmaker explained, “[Lee] cared so deeply about this role and about this project, he was so focused on the details of every scene. It’s always remarkable when someone is a universe in and of themselves, but they are also highly focused on the task at hand.”

But while Lee was up for the drama, he wasn’t as eager to groove to the music in the series’ opening credits sequence, which features the cast dancing in a pachinko parlor to “Let’s Live for Today,” by The Grass Roots.

“I wouldn’t really call it a dance,” Lee said, shyly, of his performance. “It was kind of like movement. My fans know that I’m a bad dancer.”

“He refused to dance, yes. No matter what songs we played, no matter how we tried to get him up,” she said with a smile, adding that she was widely impressed by the dance talents of many in the cast, like Jin Ha (who just wrapped a run on Broadway as Aaron Burr in “Hamilton”; the actor plays Solomon, Sunja’s grandson), Soji Arai (Mozasu, Sunja’s son and Solomon’s father) and Minha Kim.

Where much of the ensemble is made up of industry veterans, the epic series marks Minha Kim’s first major role. She was drawn to the part of teenage Sunja because of the character’s complex dynamics.

“[Sunja] has a lot of strengths in herself and is sometimes fragile, but she knows how to survive and she has all kinds of wisdom,” Kim observed. “I felt like I had to do this because it represents all the women around the world.”

“I was so honored by having the opportunity to play the same role with her and to connect with her, so it was amazing,” she added.

Kogonada emphasized just how crucial it is to bring a perspective like Sunja’s to a wider audience.

“Sunja is constantly knocked down. She makes choices that have really incredible consequences, and you expect for her to shrivel,” he began, explaining the importance of showing those “turning point moments” and the aftermath of them throughout the show.

He continued: “Women are the backbone of families and history often overlooks these mothers, and grandmothers, and daughters, that we all know in our families that there are these sort of epic stories of these women who could not give up, who were just constantly persevering and resilient. Bringing that to life was a real pleasure and joy.”

The first three episodes of “Pachinko” debut March 25 on Apple TV Plus, with the remaining five episodes launching weekly thereafter.