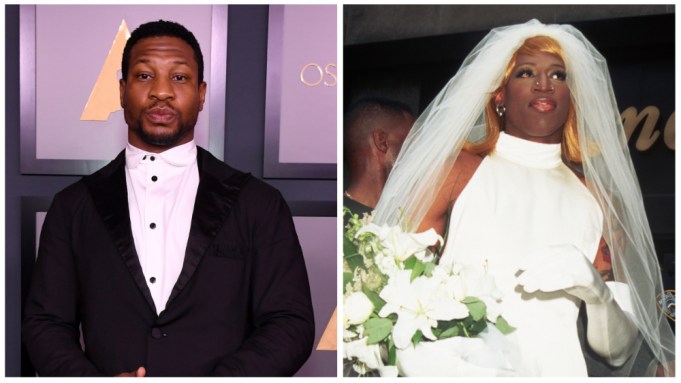 Jonathan Majors is getting ready to star as Dennis Rodman in “48 Hours in Vegas,” Lionsgate’s upcoming film about the former Chicago Bulls player’s infamous weekend trip to Sin City in the middle of the 1998 NBA Finals against the Utah Jazz.

Majors, who stars in the new Korean War drama “Devotion,” says he hasn’t talked to Rodman yet. “It’s on my list,” he told me at the Governors Awards. “I know where he’s at and I think he’s open-hearted and wants to collaborate. I want to do justice by him.”

Two years before the story in the film takes place, Rodman created quite a stir when he showed up at a book signing in New York City for his memoir, “Bad As I Wanna Be,” in full white wedding-dress drag. I asked Majors if there’s a chance we’ll see him recreate the look for the big screen. “It’s not out of the realm of possibility,” he said, laughing. “Gotta make the movie so whatever it takes.’

He was careful not to make any guarantees: “I don’t know if I can promise that. We gotta figure out what the director wants.”

Phil Lord, Chris Miller and Aditya Sood will produce “48 Hours in Vegas” for Lord Miller, and Ari Lubet, Will Allegra and Rodman will executive produce. Jordan VanDina is writing the screenplay.

Was Gina Prince-Bythewood ready to take up the sword? The “Woman King” director won’t confirm or deny that she was in talks to direct the reboot of “Blade,” with Mahershala Ali starring as the titular comic book character. I asked her about the directing rumors when we caught up at the Academy Women’s Luncheon on Nov. 16. “I love Marvel. I really do,” Prince-Bythewood said. “I love Mahershala. If I go into that world, it’s got to be a character I grew up with, love and want to see represented in the world.”

She also said that while she’s “tempted” to return as director for a “Woman King” sequel, it won’t be happening. “I literally put so much of myself into it, and I’ve said everything I’ve wanted to say for this specific one,” Prince-Bythewood said, adding that she’s developing a new historical epic. “I’m really eager to do it, and after the success of ‘The Woman King,’ I feel like it’s opened the door for it.”

Joe Jonas is opening up about his mental health. On this week’s “Just for Variety” podcast, dropping Nov. 23, the singer-actor tells me he sees a therapist on a regular basis. “We got to check in with ourselves. It’s so important. I move a million miles an hour, and you’re just hopping city to city. [But] we’re just people and we need to look after one another and check in with ourselves,” says Jonas, who co-stars in “Devotion” and co-wrote and performs the film’s post-credits song, “Not Alone.” “There were years where I didn’t look after myself and I was just going, going, going, and I was feeling crazy and feeling really affected by every little thing. And then you speak to somebody, and you’re like, ‘Oh, this is why.’”

Lucy Boynton says that before working with Christian Bale in Scott Cooper’s “The Pale Blue Eye,” she was aware of all the talk that the Oscar winner could be a bit gruff and difficult. As I’ve said many times, I’ve always had fun interviewing Bale — he’s personable, jokey and not intimidating. “I heard those rumors and very much braced myself to stay at a distance and give him his space for whatever his process is,” Boynton told me at the Academy Women’s Luncheon. “But he was incredibly engaged with the whole crew and cast and was just incredibly kind and collaborative. There are some scenes in our film that reach an emotional peak, and he was so nurturing of everybody in that environment. He’s so nice, and he really is so easy to be around.” Boynton cracked that she might start a “Christian Bale Is Kind” campaign to help mend his reputation.

Elisabeth Moss says she still hopes to produce and star in a film adaptation of former Congresswoman Katie Hill’s memoir “She Will Rise: Becoming a Warrior in the Battle for True Equality.” “We’re trying to find a home for it,” the “Handmaid’s Tale” star tells me. The project was announced more than two years ago and will chronicle Hill’s political rise and surprising fall from grace after intimate photos of her were leaked to the tabloid press. Hill has said she was trapped in a cycle of domestic abuse but also revealed she had an inappropriate relationship with a campaign staffer before she was elected. “It’s a very complicated story,” Moss says. “It’s a story that doesn’t have one side to it. It’s not black and white. … We’re interested in exploring it with honesty, not bias.”

Moss says Hill has been “very open so far. She wants to make sure we’re telling all sides to it, which is very generous of her.”