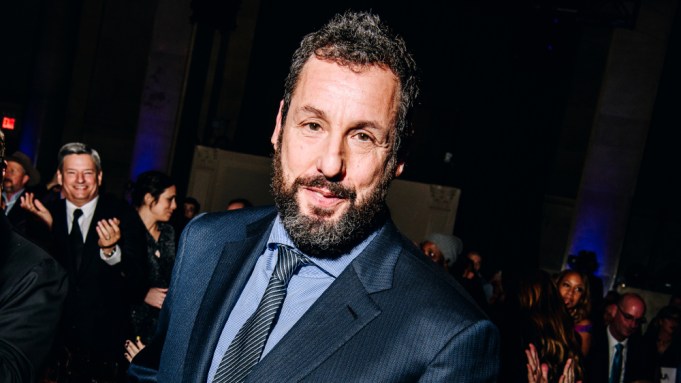 After the success of “Uncut Gems,” filmmaker brothers Josh and Benny Safdie and their star Adam Sandler have a lot to live up to with their next collaboration. The trio announced in October they were reuniting for an untitled film for Netflix.

While details about the project are under wraps, Sandler did tell me Monday at the Gotham Awards that he’s going to have a much “different look” than he’s ever had. “I can’t say that I’m gonna look that handsome in it,” Sandler said. “It’s not a handsome moment…It’s gonna be tough.”

As for the storyline, Sandler would only say, “They’re working hard. Every time I talk to them they say they are working hand.”

Sandler starred in “Uncut Gems” as a Howard Ratner, a shady New York City jeweler with a gambling addiction. He took home the Independent Spirit Award for best make lead while the Safdies picked up the best director trophy.

The Safdies were on hand at the Gotham Awards to help celebrate Sandler with a career tribute.

Sandler joked with me about the honor, “I was 17. I was at NYU. Other kids, I would scream at them, ‘Gotham Awards are coming!’ And they’d be like, ‘What are the Gotham Awards?’ I said, ‘Don’t worry about it. They’re gonna tribute me.’”

“As much as it helped ultimately, it was also fucking scary as a gay person who wanted … a career for themselves, in the same road, in the same industry,” the actor tells me on this week’s “Just for Variety” podcast, which drops tomorrow . While Parsons’ sexuality was an open secret in Hollywood for years, he didn’t come out until 2012. Before then, I remember his team making it very clear that he would not discuss his private life during interviews, even when he made his Broadway debut in 2011 playing a gay man in Larry Kramer’s AIDS play “The Normal Heart.”

Now, he stars in “Spoiler Alert,” Michael Showalter’s feature adaptation of journalist Michael Ausiello’s memoir about his late husband Kit Cowan’s battle with cancer. Parsons portrays Ausiello (who is editor-in-chief of Variety sibling TVLine) opposite “Fleabag” actor Ben Aldridge as Cowan. “There are a lot of gay characters I get offered,” says Parsons, who also is a producer of the film. “The majority, I would say, that I get offered are gay.”

He continued, “But the gay characters I have played, especially in the past five or so years — between [HBO’s 2014 adaptation of] ‘The Normal Heart,’ ‘The Boys in the Band,’ and the agent Henry Willson in Ryan Murphy’s ‘Hollywood,’ and now this — they have been such rich characters and in such interesting storylines that I have had an awakening of how much I love as an actor (and, if I may say, artist) bringing myself to the work.”

My other guest on “Just for Variety” is “Fire Island” star Matt Rogers. The funnyman tells me that he sent Mariah Carey an email asking her to make an appearance on his new Showtime holiday special, “Matt Rogers: Have You Heard of Christmas?” “I do not think it reached her, which is totally fair,” Rogers says, laughing. “But I wish that one day she does read it because I did tell her a story about being obsessed with her from a young age.”

Rogers says his love for Carey was an early sign that he was gay. He was only 10 years old when he asked for Carey concert tickets for Christmas. “I came out when I was 19. That was when I verbally said it,” he says. “But I certainly, emotionally and in action, came out when I was 10 years old on Christmas and got Mariah Carey tickets to Madison Square Garden. I don’t think there’s ever been a gayer display.”

And speaking of “Fire Island,” Joel Kim Booster told me at the Gotham Awards that he had a sex scene with Zane Phillips that didn’t make it into the movie. “We had a brief hook-up scene. It was really hot,” Booster said. “I know we had to get the running time down, but why did my beautiful ass have to get cut from the movie?”

Fingers crossed we’ll see more of Angela Bassett in the MCU. I recently asked if she’d like an origin story movie for her “Black Panther” character, Queen Ramonda. She flashed a big smile and sang, “Yes, yes, yes!”

Billy Eichner won’t let the underperformance of “Bros” at the box office stop him from developing queer rom-coms. He and Paul Rudnick are writing “Ex-Husbands,” a “War of the Roses”-like comedy for Amazon. “You have to keep firing away,” he says. “I loved [‘Bros’] and people who see the movie love the movie, so I hope people continue to discover it.”

“Bros” will be available Dec. 1 on Peacock. “Hopefully, people will stream it for the holidays,” Eichner says. “It’s actually kind of a good holiday movie in its own sexy, irreverent way. … But you gotta keep going and writing. You can’t let commerciality of something or not dictate your work.”

Eichner plans to star in “Ex-Husbands,” but says casting has yet to begin for his character’s ex.