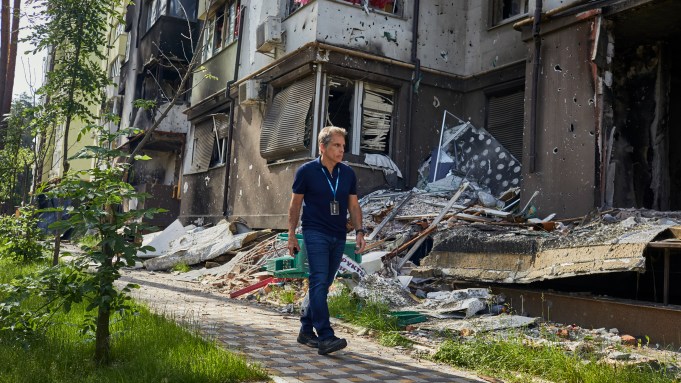 Stiller is currently visiting Ukraine in the role of a goodwill ambassador of the United Nations High Commissioner for Refugees. Since Saturday, Stiller has traveled through Poland and Ukraine, where he has met with people forced to flee their homes due to the current Russian invasion of Ukraine. On Monday, he visited occupied settlements in the Kyiv Region, including the residential areas of Kyiv.

According to a press release from the official website for Zelenskyy, Stiller and Ukraine’s UNHCR representative Karolina Lindholm Billing visited Zelenskyy on Monday after their visit to Irpin to discuss their meetings with refugees.

“It’s one thing to see this destruction on TV or on social networks. Another thing is to see it all with your own eyes,” Stiller said during the meeting. “That’s a lot more shocking.”

“What you saw in Irpin is definitely dreadful,” Zelenskyy said, according to the press release. “But it is even worse to just imagine what is happening in the settlements that are still under temporary occupation in the east.”

Steller and Zelenskyy spent the meeting discussing the needs of those in the Ukraine and Poland who have been displaced by the Russia’s invasion of the country, as well as how the UNHCR and the Ukrainian government can work together to solve the refugee crisis. Since Russia began its invasion of the neighboring Ukraine in late February, a reported 7.7 million people have been displaced from their homes, with women and children constituting 90% of those forced to flee. Additionally, according to Ukrainian authorities, roughly 400,000 Ukrainian citizens have been forcibly deported to Russia since the invasion began.

“I’m meeting people who have been impacted by the war, and hearing how it’s changed their lives. War and violence are devastating people all over the world,” Stiller said in the video. “Nobody chooses to flee their homes. Seeking safety is a right and it needs to be upheld for every person.”

A post shared by UNHCR, the UN Refugee Agency (@refugees)