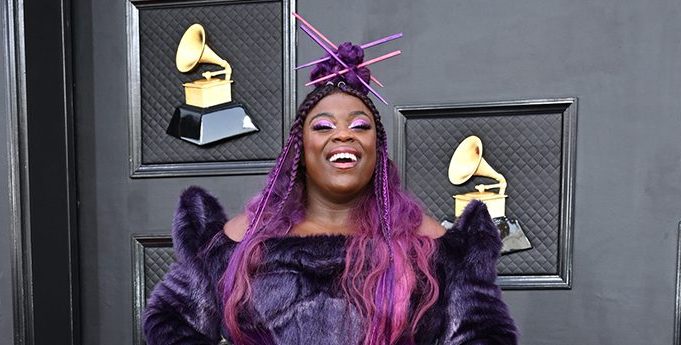 This June, acclaimed singer-songwriter Yola will be making her film acting debut in Baz Luhrmann’s hotly anticipated “Elvis” biopic. On the Grammys red carpet, Yola discussed her excitement about portraying Sister Rosetta Tharpe, the Godmother of Rock and Roll, in the film.

“It’s just the privilege I have to speak her name, and to speak on it,” Yola told Variety senior entertainment writer Angelique Jackson. “Everyone can talk about it, but the role I have is so central and mainstream and in the purview of everyone, everyone knows about it. So the privilege I get to transmit this message, of rock and roll, and the diaspora’s ownership of this genre, along with everything that it gave birth to, that gives me life.”

During her interview with Variety On the Carpet presented by DIRECTV, Yola also talked about working with Luhrmann, calling him the “king.” According to Yola, the director made it a priority in the film to address how Black American music impacted Elvis Presley’s work, which led to the large role that Tharpe plays in the film. Yola says the film will explore how Tharpe helped invent rock and roll and discovered many influential artists, including Little Richard.

“The thing that touched me is it was [Luhrmann’s] mission to address this balance as well,” Yola said. “It wasn’t just pulling people in and making a token gesture at it, it’s profound within him. And that spoke to me, that was my motivation.”

At the Grammys, Yola was nominated for two Grammys, in the Americana album and American roots song categories. She has been outspoken about the inclusion of Black women in the country and roots genres. On the red carpet, she talked about seeing a new generation of Black female country artists come into their own, such as Grammy nominee Mickey Guyton, who she referred to as “her sister.”

“I think the important thing is nuance in our stories,” Yola said. “There’s definitely a vanguard of artists of color coming through, Black women specifically, in country and in Americana. I identify very much across a lot of space. And my record inhabits that space, including rock and roll, including soul music. So it’s very important that we are able to claim all of this space. And everything I’m doing in my life right now is about claiming that space. Including the movie I’m in.”