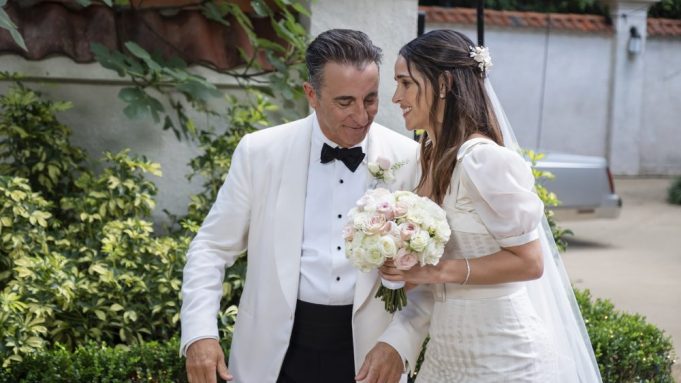 For Gaz Alazraki’s remake of “Father of the Bride,” now streaming on HBO Max, the beloved classic about a daughter’s impending wedding day was reimagined with some twists — it moved from Connecticut to Miami, and from a white family to a wealthy Cuban-American brood led by Andy Garcia and Gloria Estefan, parents to Adria Arjona. Diego Boneta portrays the groom, a lawyer from a Mexican family.

For the score, Alazraki turned to composer Terence Blanchard, whose credits include “Mo Better Blues,” “Da 5 Bloods” and “BlacKkKlansman.” As heard on the track “Saving Wedding Montage” (listen above), Blanchard provided his own update — a score with his signature jazz sound.

With the film set in Miami, how did you approach the score?

When I first read the script, I was wondering if they wanted me to do a Latin-based score because the film has some great Latin artists. But, that’s not what Gaz wanted. He wanted a Jazz score to counter what he had already put in the movie.

When you say jazz, it can mean a whole host of things, so it took us a minute to whittle down what it was that he was looking for. He threw out some names such as Charlie Christian, an American jazz guitarist, and that changed my whole direction.

I had also written a few different approaches to the film, and once we had those, it was about finding great musicians who could bring the score to life.

What conversations did you have about how to weave score into the movie?

I worked with the music producer and talked to him about ideas for the musicians that would play in the orchestra. It was really about finding the right tone. We discussed it scene by scene. Scoring drama is something I can do in my sleep. I was probably conceived while my mom was watching drama, but comedy is scary because you don’t want to mess up a joke. Gaz came to New Orleans to sit down and go through the scenes. It was the first time I had had someone in the room while I was writing and playing with Gaz saying, “More like that.”

Were there instruments specific to comedy that you used?

We played the comedy by being serious musically. If you look at Andy’s character, Billy, he’s very conservative and traditional. He happens to love jazz. So the trick was to not play up the comedy but to have that music refer back to who this guy is. Through that lens, you can have the juxtaposition of these other characters. There was no need to play the comedy up there, especially with the daughter because she’s the most sympathetic character in the whole film.

If we had tried to play comedy into the score, I feel it would have ruined it. The whole movie is getting to that moment where Andy’s character Billy turns around and says, “That’s not the wedding you wanted.” So the music had to stay in his world.

Did the characters have motifs and cues?

There were definite themes. Billy had his theme. There was one for his wife [Ingrid]. When you write music and it starts to work for the scene, it only goes that much further when you bring those musical personalities into the plan.

The original motion picture soundtrack is out now from WaterTower Music