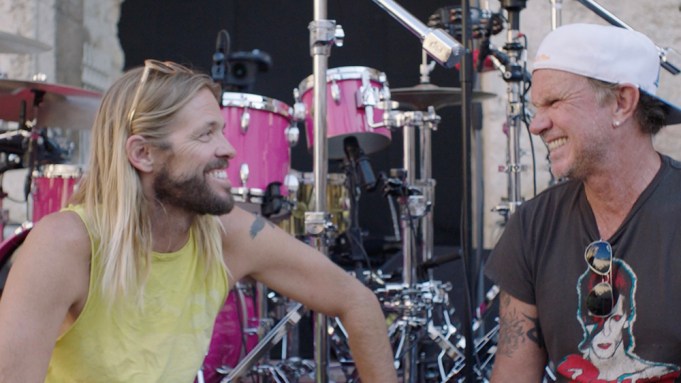 Red Hot Chili Peppers drummer Chad Smith has shared a tribute video to Foo Fighters drummer Taylor Hawkins, who died on March 25 at the age of 50.

The video is a compilation of Smith and Hawkins’ most memorable moments together captured on camera, including many clips from touring. Foo Fighters first opened for the Red Hot Chili Peppers in 1999 on their “Californication” tour, during which Hawkins and Dave Grohl played an epic prank on Smith by dumping pasta on him while he was drumming. Ever since, the two drummers kept up a playful yet sincere friendship, which is displayed in the video.

“Taylor’s my good buddy who I’ve known forever,” Smith says during an interview clip at the beginning of the video. As “My Hero” by Foo Fighters plays in the background, footage is shown of Smith and Hawkins playing the same drum set and goofing around backstage. “I think we’re going to make a lot of other rock bands a little jealous,” Hawkins tells Smith in one clip.

The video ends with Smith’s tribute to Hawkins during the Red Hot Chili Peppers’ Hollywood Walk of Fame ceremony on March 31. “I have to give a shoutout to my brother Taylor Hawkins. I love you, Taylor,” Smith said in his speech. “He would laugh and make a smart ass comment about this whole thing.” A sweet clip of the two walking arm-in-arm closes out the video.

The video was put together for Smith by Daniel Catullo, who directed the 2017 “Foo Fighters at the Acropolis” series on PBS that Smith hosted. Red Hot Chili Peppers’ newest album, “Unlimited Love,” released on April 1. Watch the full video, exclusive to Variety, above.

Hawkins died while Foo Fighters was on tour in South America, before the band was set to play at a festival in Colombia. Following his death, Foo Fighters announced on March 29 that they had canceled all upcoming tour dates.

“It is with great sadness that Foo Fighters confirm the cancellation of all upcoming tour dates in light of the staggering loss of our brother Taylor Hawkins,” the band said in a statement. “We’re sorry for and share in the disappointment that we won’t be seeing one another as planned. Instead, let’s take this time to grieve, to heal, to pull our loved ones close, and to appreciate all the music and memories we’ve made together.”