What Exactly Will Swedish House Mafia Be Doing at Coachella?

From the moment it was announced, Swedish House Mafia’s appearance at the 21st Coachella festival has been confusing, and the unveiling of the official lineup on Wednesday has done little to clarify matters.

The EDM titans are listed on the Coachella lineup digital poster — which carries its own subtext, based on order of placement and font size — in a headliner-sized font, but at the bottom of the lineup, and with no specific date listed. 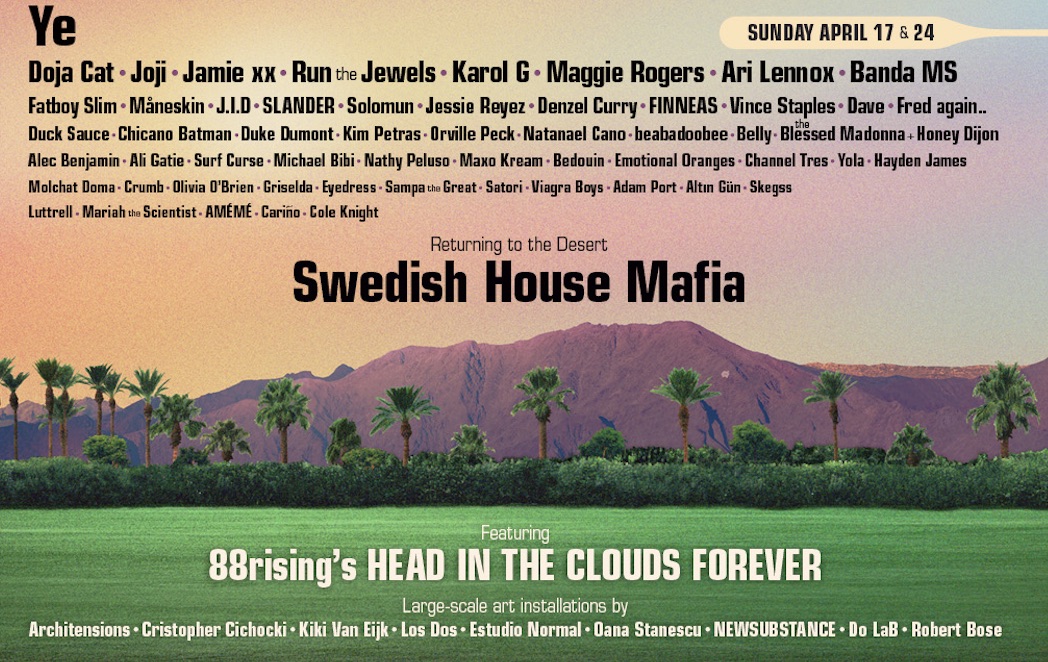 Sources tell Variety that the group will be closing out the festival — meaning they’ll be following or performing at the same time as Sunday night headliner Kanye West, which brings its own set of complications.

So what is actually going to happen, if the festival — which has already been postponed four times due to the pandemic — does indeed take place over the weekends of April 15-17 and April 22-24? Reps for SHM, Coachella and its promoter, Goldenvoice, either did not respond or declined requests for comment, so let’s start (sort of) at the beginning.

This particular element of the ongoing drama of the 21st Coachella festival began back in October, when the festival posted a mysterious photo of three silhouettes (SHM’s Axwell, Steve Angello and Sebastian Ingrosso) standing in the field at Coachella’s iconic home base, the Empire Polo Fields in Indio, Calif. — unnamed, but with the group’s signature black-circle logo in the comment. Shortly after, the group posted its own teaser: a 20-second video of a sewing machine at work, ending with the unveiling of a hoodie bearing both the SHM and Coachella names.

That kind of single-artist announcement was rare if not unprecedented in Coachella history, but okay — Swedish House Mafia would be taking one of the headlining slots, which presumably was in flux due to the pandemic, right?

Not necessarily. In the months since then, insiders have bantered back and forth about whether the group — which disbanded in 2013 at the peak of their EDM-era popularity but reunited five years later and have played multiple major concerts since then — is strong enough of a name to be a Coachella headliner in 2022. (Coachella routinely sells out before its lineup is announced, but optics do matter.) Maybe they would be filling the festival’s familiar “throwback” (a.k.a. “heritage”) headlining slot, which in past years has gone to the high-profile debut of a classic Coachella-centric group’s reunion, like Bauhaus or the Stone Roses.

SHM’s reunion was hardly a new thing, but Coachella has stretched that definition before: One of the original headliners of the 21st festival was Rage Against the Machine, who have reunited several times in the past. But first Billie Eilish was confirmed by sources as a headliner, then Kanye West, and then Harry Styles…

And when the lineup was finally announced on Wednesday, there was Swedish House Mafia — listed in a headliner-sized font, but separately, near the bottom of the poster. The only further detail on the poster could not be less revealing: “Returning to the Desert: Swedish House Mafia,” referencing the group’s appearance at the fest in 2012.

Such big-font lower billings have been used by the festival previously twice: Once for Kanye West’s “Sunday Service” in 2019 (signaling that it would not be a conventional performance), and for the April 2020 original lineup poster of this year’s oft-postponed installment, noting a “Double Happiness” performance by 88rising — an Asian-American musical collective and company, who are returning this year (and are actually billed below SHM’s bottom-of-the-bill listing, this time with an undated event titled “Head in the Clouds Forever”).

So if SHM is actually closing out the festival, as Variety’s source says, they will be following West, who not only can be a mesmerizing and headline-grabbing live performer, his public performances last year all started 90 minutes to two hours later than scheduled.

That creates just about the worst imaginable scenario for an SHM festival-closing set: Following a late performance that virtually no one will want to miss at the very end of a three-day festival. “Sundays are hard,” one festival-business veteran tells Variety. “People are tired, ancillary revenue falls off, and all anybody is thinking about is getting home. It can be really hard keeping people there, unless someone like Kanye West is playing.” (A far more appealing options might be playing a late-night set on Friday or Saturday, after Styles or Eilish.)

Another possibility, according to a different live-music veteran with decades of experience with festivals, says SHM could be collaborating with other artists. “A lot of the time when an artist is listed at the bottom, they’ll be doing an untraditional set: Either a special performance of an album, or they’ll be sitting in with different artists as various points during the festival,” the insider says.

That seems possible as well, since DJs are nothing if not adaptable in a live setting and Swedish House Mafia, as a unit and separately, have collaborated with dozens of major artists over the years, ranging from Pharrell and Ty Dolla $ign to British rapper Tiny Tempah and the Weeknd.

In fact, the group has been collaborating extensively with the Weeknd in recent months, appearing on two tracks on his new album, “Dawn FM”; they also are managed by the same company (SalXCo) and are on the same label (Republic), and they have an album of their own due in the coming months. Thus, it’s possible there could be some kind of separate, special SHM set, a la Sunday Service, and smart money would have them strengthening their hand by lining up a Weeknd or other cameo, which would of course be loudly and deliberately rumored in the days before.

Or maybe West will play a morning “Sunday Service” and SHM will actually close out the festival? It seems unlikely, given his rapturously received career-spanning set in Los Angeles late last year, but he’s done sneakier things before… or, they’re Coachella’s Sunday-night replacement if West bails, which, as some may remember, he did just two days before he was to be announced as a 2019 headliner, because the festival couldn’t accommodate his production demands.

“It might not even be fully figured out yet,” one of the insiders says. “But whatever they’re doing, it’s working so far: Surprises are good, buzz is good, rumors are good, speculation is good, and they’re really hard to create around an event this big. But they have: We’re talking about it now, aren’t we?”