From Broadway Tunes to Burlesque Numbers, Behind the Music of ‘Marvelous Mrs. Maisel’ Season 4 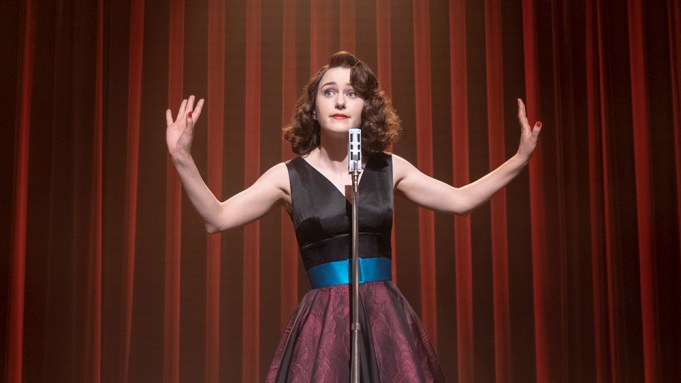 Everything about season 4 of “The Marvelous Mrs. Maisel” was bigger, from the sets to the drama and, of course, the music.

Returning songwriters Tom Mizer and Curtis Moore were tasked with creating a pastiche of sounds, including calypso, period-appropriate pop, a Broadway tune and several striptease numbers.

As Urdang explains: “We built upon the musical palette of the show using numerous hidden gems such as ‘Femininity’ from ‘Oh, Captain’ in the final dance sequence at the burlesque club.”

In an extension of how the show uses music, Urdang says they also created Mandarin-language versions of American standards to use in the Button Club’s jukebox, along with original songs written by Mizer and Moore for the wedding of closeted singer Shy Baldwin.

Music has always played a big role in shows created by Dan Palladino and Amy Sherman-Palladino, but not as score, necessarily.

“Using existing songs as score presents its own challenges as they have to work perfectly to the visual,” says Urdang. “Count Basie’s ‘Jumpin’ At The Woodside’ [is one example] during the raid of the Burlesque club, and various others. Sometimes this means recording additional instrumentation or adding beginnings or endings.”

As Stewart Lerman, executive music producer for “The Marvelous Mrs. Maisel,” explains: “Amy and Dan gravitate to music in a really intense way. Music in the show is never incidental.”

Watch how the music for the Amazon Prime hit came together in the video above.