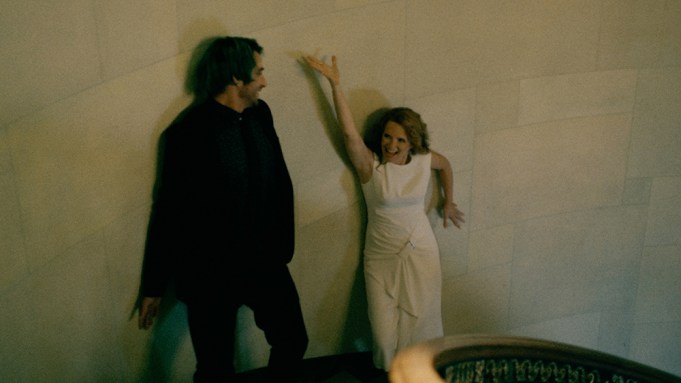 Lea Thompson has always been at the top of her acting game, but she’s putting her experience competing on season 19 of “Dancing With the Stars” to use in a new music video. Featured alongside Tyler Posey (of MTV’s ‘Teen Wolf’ series), the clip for Canadian electro-pop artist Riotron, “Life Is What We’re Living,” was directed by Alissa Torvinen, who also helmed the camera for award-winning videos by Phoebe Bridgers, Pink and Black Eyed Peas, as well as Melanie Martinez’s “K-12” feature film, which boasts 100 million views on YouTube.

The video, which can be viewed above, follows the emotional story of a man who has recently lost his mother, and is struggling to deal with their unresolved complicated relationship.

“The song was inspired by a good friend who lost his mother to cancer,” said Riotron’s Jeff Fettes. “He was devastated but eventually found peace and even inspiration in her continued ‘presence’ in his life. He inherited this incredible sense of urgency about living. Death turned into life in a way that I found so beautiful. The video is a metaphor for his journey through the stages of grief, from denial and anger all the way to acceptance and hope.”

The tale is told through a choreographed, lyrical interpretation that gives Thompson the opportunity to show off her moves.

“When I heard Jeff’s song, I immediately fell in love with it,” said the actress. “It was so haunting and yet hopeful. And then when I saw Alissa’s work, I was so interested in being a part of this young director’s vision. … I have been directing lately and I thought what an exciting scary thing to be a part of — dancing in a music video. It was great fun to explore dance in a way that was so devoid of pressure and so profoundly full of expression.”

The fact that Thompson is a director herself made for a fruitful collaboration. Said Torvinen: “Lea is an incredible storyteller and a director as well, but drawing on her own experience as a mother she said, ‘I feel like my character needs to hug him!’ And that was it. That idea came from Lea. That moment tears my heart out every time. I dare you not to cry.”

Posey said that the concept of the video “was something creatively and artistically I really wanted to check off my list. … My mother passed away just like my character’s mother. She was my best friend, my biggest support system, my good advice, my laughing buddy, my crying shoulder,” he tells Variety. “I really resonate with my character and wanted to bring that storyline to life. It was and still is a massive loss for me and my family when she died. She was very very special and I’m so lucky I got to share my life with her.”

The opening shots of the video, set at a funeral, was especially emotional for Posey. “Reliving the funeral scene was a heavy moment for me,” Posey said. “I haven’t portrayed that in any project,” Posey said. “Also l’m a huge fan of Lea’s and was honored to share the set with her.”

The two actors “rehearsed the choreography rigorously for about a week or two prior to filming for hours a day,” Posey said. “I’ve never practiced a choreography this intensely for any project before and I was so happy to do it with someone as willing as Lea. Our instructors Jillian and Billy were also the greatest and I owe everything to them.”

“Life is What We’re Living” is remixed by Mahalo, with an additional remix by DJ Paul Oakenfold set for release this summer.