How Kylie McNeill, a Teen Without Internet Fame, Wound Up as the Voice Star of ‘Belle’ (EXCLUSIVE)

In an era of TikTok favorites getting record deals and lead acting roles, follower counts and blue checkmarks seem to be a requirement for getting a big break in Hollywood. It is therefore refreshing and rare when a 19-year-old from Manhattan with no internet fame whatsoever is plucked from relative obscurity and given the chance of a lifetime: voicing the protagonist of one of the highest-grossing anime movies in Japan of this past year as her industry debut. And, boy, does she have the pipes to prove she belongs in the big leagues.

Much like her character Suzu in Mamoru Hosoda’s highly-acclaimed and visually stunning “Belle,” Kylie McNeill is just a soft-spoken teenager that likes to record herself belting her heart out from the comfort of her bedroom. Though she majored in theater at New York’s prestigious Professional Performing Arts School — which has churned out singers and musicians like Alicia Keys, Tru Collins, Taylor Momsen, Britney Spears and Elena Satine — McNeill has, thus far, kept a low profile.

But, McNeill’s breakout and debut voice acting role in an animated film that received 14 minutes of applause and accolades at the 2021 Cannes Film Festival could pave the way from anonymous, übertalented teen to an übertalented young star. “I feel like even in the process of dubbing, in a way, her journey parallels Suzu’s gaining of confidence and development into a celebrity,” Stephanie Sheh, ADR director and English-dub legend, said.

Variety connected with McNeill, as well as two of the people behind her casting —  Sheh, a veteran of anime and game dubbing (not to mention the voice of Sailor Moon) and Rodney Uhler, director of special projects at distributor GKids — to talk about finding the voice of Suzu and Belle.

Before diving in, make sure to check out this exclusive clip of McNeill performing “Gales of Song” acoustically, courtesy of GKids:

Finding the Voice of Belle

It was easier to cast Hunter Schafer, Chace Crawford and Manny Jacinto in their respective voice acting roles in “Belle.” Their acting merits, unique voices and star power served not only the emotional and creative elements of their characters, but also aided in marketing the movie in the United States and attracting fanbases that may not be ardent followers of the latest in anime.

Finding McNeill, however, meant ensuring that no stone was left unturned in the pursuit of the perfect Suzu/Belle. It started with over 250 submissions, primarily from agencies, and Sheh and her co-dubbing director Michael Sinterniklaas, along with Uhler’s team over at GKids, pored over the auditions and whittled it down to eight candidates.

“Looking back on my own notes, Kylie was always in the top two, right from the get-go,” Sheh said. “I remember that as soon as Michael and I started the callback process, he said something along the lines of ‘I found her. I don’t think anyone else will work.'” McNeill’s submission came to their team through a traditional route (an agent), but Sheh said that prior to making the final decision, she personally spent several hours watching virtual concerts, videos, cold-emailing and DMing people on social media just to cover all the bases on who could be a good match. She also needed to prepare in the event that the perfect Suzu wasn’t the best singer, and Belle needed to be cast as a separate entity.

“In the end, Kylie made a perfect Suzu, and when she needed to, she could turn on the charisma of Belle,” Sheh recalled.

“Studio Chizu was really generous with us in terms of what they shared from their process,” Uhler added, “and they were also clear that they wanted the English version to be its own thing, and that we didn’t have to strictly adhere to what they made the original Japanese version sound like. We had a lot of freedom there, but on the GKids side, we were equally excited about Kylie from the beginning.”

When an official English medley of the songs in “Belle” was posted on YouTube as a means of teasing the movie’s release and hyping up fans, many commented on the video, wondering if the reason why McNeill was cast was because of how similar her voice was to the original Japanese voice actor’s, Nakamura Kaho. Sheh affirmed that the voice match was purely coincidental.

“In a perfect situation, whenever you’re dubbing, we try to respect the original language version, but it can also come down to debating between different actors that could potentially be cast in a role, who may not have the perfect voice, but do have a better emotional match with the character. We are always going to go with who fits the character,” Sheh noted.

McNeill was able to access the vulnerability of her character well, and also has a deeper register to her talking voice — which still sounds young, but not in a way that comes across as cheesy. When anime is dubbed for Westerners, it tends to fall into the trap of voicing girls too young, forcing brightness and youthfulness. “Teens have voices with different pitches and textures, and we wanted the interpretation of their voices to feel authentic in the film,” Sheh continued.

“What was particularly rewarding is the process of discovery that is in the film; what is happening now with Kylie. I think people are sort of now just seeing who this new talent is and getting really excited about her. Having that sort of element of the story match with reality is rewarding. We found this gift, and now we are excited that other people get to experience it as well,” Uhler said.

Breaking Out as Belle

Before graduating high school, McNeill was in an off-broadway show called “Runaways” at the New York City Center (and later the Delacorte Theater), but that’s as far as her professional credits go on-stage. As far as acting on-screen, McNeill’s résumé was a blank slate before tacking on “Belle,” save for a couple of YouTube videos of herself singing original songs she had recorded in her bedroom, much like Suzu testing out her material in “U.”

After receiving the news that she had been cast for the role from co-dub directors Sheh and Sinterniklaas, McNeill said that she went into the actual recording process “pretty blind.”

“I am used to performing live, and memorizing entire shows is not new to me,” she said, “but approaching a scene for the first time in the dubbing studio was daunting at first, for sure. It’s a whole different mindset and task. When you’re doing voiceover — and I think dubbing specifically — there are time constraints regarding the way the mouth moves on your character or the way your character appears to be expressing emotion. You have to do it justice.”

McNeill explained that she was alone in a booth for three weeks with the English dub directors and that not all the other characters were fully dubbed. So, when she was doing her part, sometimes she would be “talking” to characters that were responding in Japanese. Not fluent in Japanese, McNeill found that to be particularly challenging, but she was at least familiar with the anime genre. (Her favorite, other than “Spirited Away” and “My Neighbor Totoro,” is Hosoda’s “Mirai.”) It also helped that she “immediately related” to Suzu.

“When I got the audition for it, the description said that there was a very shy 17-year-old high school student that loves music and is a songwriter and I was like, ‘Oh my God, that’s me!'” McNeill said. “Once I saw the movie, it helped me understand Suzu’s complexities and they did so much justice to her awkward, shy girl in high school teenage experience, and I fully relate.”

Aside from McNeill’s natural voice talents, she comes from an arts-driven family — her parents are actors, who she claims raised her on Broadway albums, and her abuelo was a flamenco singer. Singing was part of her life, always, and her grandpa also instilled in her a deep love of making music. She plays the piano, the ukelele and the guitar. But, singing for a movie — specifically one originally made in Japanese being dubbed and translated into English — was another new obstacle McNeill had to tackle.

“I love Nakamura Kaho, the original voice of Belle, and I love her own music that she has released besides for this film. But, when I was approaching the time where I had to record the music, I needed to stop listening to the Japanese version because I didn’t want to copy Nakamura’s take on Belle,” McNeill said. “I wanted to make sure that my performance was unique, while also honoring her performance as much as I could.” When voicing Suzu’s scenes, McNeill tapped into her anxiety, her depression and her complex past, making sure the character sounded more fragile and, in some instances, hectic. On the other hand, for Belle, she needed to dial down on the awkward teen vibe and put on an air of confidence. “It was so fun to play around with those two opposing approaches,” McNeill continued.

Since “Belle’s” theatrical release nationwide on Jan. 14, McNeill’s YouTube page has steadily crept up in numbers — from 700 to a little over 3,000 — and while she only has a handful of her songs uploaded on her page, her budding fanbase should expect to hear more from her soon. “As soon as I possibly can, I want to make projects with my own original music, and I am working on some stuff now. I also want to keep acting. I would totally be open to doing more voice acting and on-camera acting, even, but I would say that music is probably my five-year plan priority,” McNeill said.

McNeill hopes that audiences that venture out to watch the film, which is currently only being screened in theaters, will take away some of her favorite messages from the movie, like the power of the internet and how it can be a force for good and kindness, but also simultaneously a place that breeds negativity. She also loves the underlying storyline of finding your own power. “It takes time to figure out who you are! I just hope that the kid in the back of the class that feels awkward and feels like they don’t know how to operate finds themselves. I think this movie inspires how that can happen.” 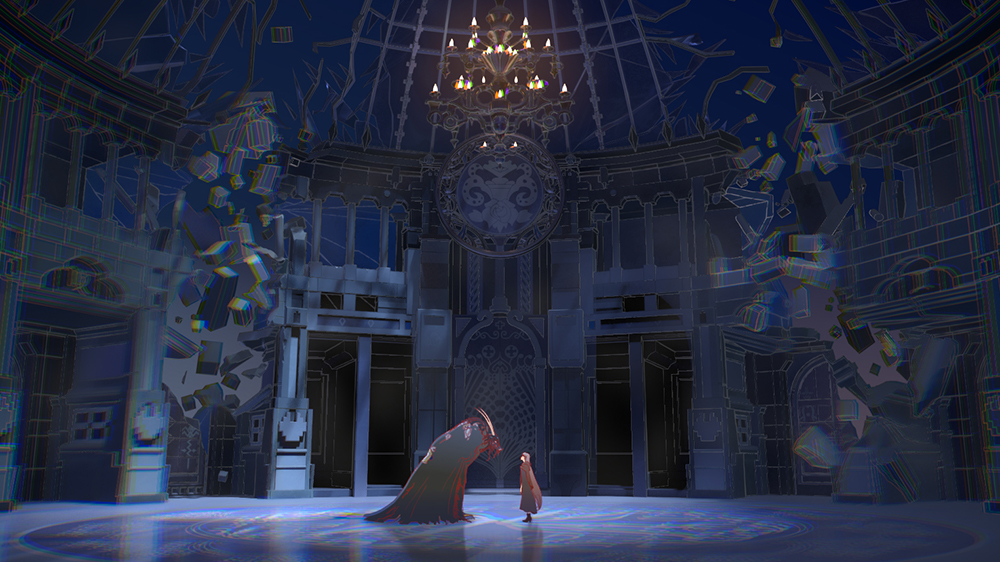 To listen to more songs from “Belle,” check out this handy YouTube playlist from Milan Records USA.