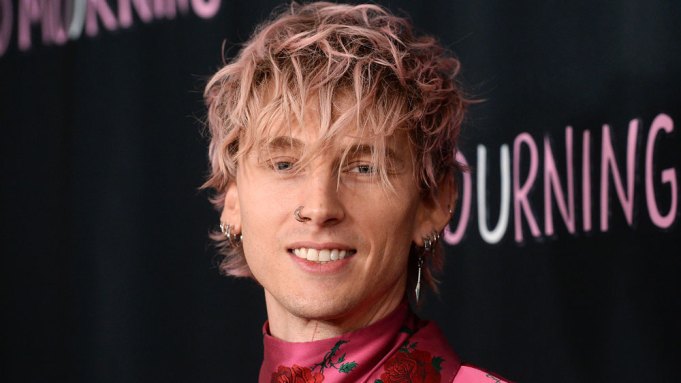 I’m happy to report that all is well between me and Machine Gun Kelly.

In September, a video of the musician slapping my microphone at the MTV VMAs in New York City after I asked him about a scuffle he got into with MMA fighter Conor McGregor earlier on the carpet went viral.

However, MGK and I laughed off the controversy when I interviewed him on Thursday at the premiere of “Good Mourning” at the London West Hollywood.

“I won’t hit the microphone this time,” he said, laughing.

With that out of the way, we talked about “Good Mourning.” MGK not only co-wrote and co-directed the stoner comedy with Mod Sun, but he also stars in the film. The movie follows a famous actor (Kelly) who emotionally spirals when he thinks his girlfriend (Becky G) has broken up with him over text.

The story was inspired by a text his fiancé Megan Fox sent him before they were even dating. “It was right before she went on a trip,” Kelly recalled, adding, “So I was just stuck, like, sitting there trying to decode this text. And it was like the Da Vinci Code. I went to all these places, like what does this mean? What does this mean? And everyone I was getting relationship advice from wasn’t in a relationship. So it just led me down a long, dark, terrible road.”

The script was done by the time Fox returned home.

“I showed up on her doorstep with 150-page script and I was like, ‘I need you to sit down. I need to read this to you,’” Kelly said. “And then I read the whole thing and she was like, ‘This is what was in your head? Nothing is wrong. Like read the text again. This is what I said.’ It’s really funny how things works out. We always get in our own heads. We get in our own way.”

Fox appears in the movie as one of his roommates. “I love that she got to be what my favorite things about her is — how funny she is and how witty she is,” Kelly said.

Kelly uses his real name – Colson Baker – for the movie’s credits because he said the movie “has nothing to do with” his rocker persona. “A huge part of that character that you’re watching in the movie is me in real life,” he said. “Like I am very kind of a boyish, lost, sweet kid at heart and I feel like the world kind of makes me kind of harden up and feel like I have to defend myself.”

And just how Method did the cast get playing stoners? Watch the full interview above to find out.