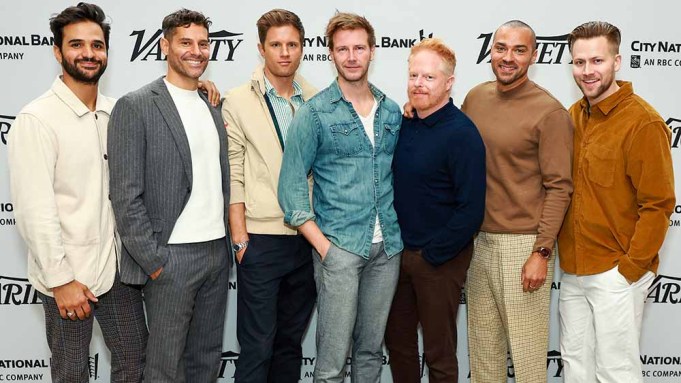 Jesse Williams and the company of “Take Me Out” are especially grateful to the plumbing on Broadway. Without hot water flowing through the pipes at the Schonfeld Theatre, the infamous locker room scenes in the Tony-winning revival would be even more daunting to the actors who bare it all on stage.

Initially, Williams jokes, the cold water that cascaded out of the showers posed a unique issue. “[The water] has to get pushed through the pipes. When it first comes out, it’s not friendly,” he says. “You’ve all seen ‘Seinfeld’… shrinkage.”

Though it’s prompted plenty of chatter, the two scenes that feature the fully naked men aren’t meant to sensationalize, but rather to put the fragility of hyper-masculine egos on display.

“The audience needs to be confronted with what we’re confronted with,” Williams shared at Variety’s Business of Broadway breakfast presented by City National Bank. “We have to look at each other’s dicks every day. We have to be naked every day. As an audience, you have to decide whether to look up or down.”

Williams adds, “We joke that we should ask, ‘What did they say in that scene?’ Many of you don’t know.”

“Take Me Out,” a comedic drama about a baseball player who comes out as gay at the height of his career, is making a rare return engagement on Oct. 27 after a five-month hiatus. Williams, who scored a Tony nomination for his portrayal of MLB star Darren Lemming, admits he was hesitant to come back to the stage.

“When they asked me in my dressing room on an eight- or nine-show week, I was like, ‘I need a nap.” But after a break, which gave him time to reflect on the “unique and rare experience,” he says, “I didn’t want it to end. He also shared that actor and producer LaTanya Richardson Jackson gave him a push to return. “I’ve never been happier.”

The logistics of one of theater’s most buzzed-about sequences was one of many revelations at Variety’s Business of Broadway breakfast presented by City National Bank.

Other topics of discussion at the morning of panels and keynote conversations include Broadway’s efforts to diversify and the awkwardness that can arise when giving notes to your spouse (well, that situation may be unique to LaTanya Richardson Jackson, who directs her husband Samuel L. Jackson in the revival of August Wilson’s play “The Piano Lesson”). Here are five takeaways:

Samuel L. Jackson is the billion-dollar box office star of “Pulp Fiction” and “Avengers: Endgame.” But, he says, “if theater paid like the movies, I wouldn’t do movies.”

“I have to do movies because she likes things,” he says, pointing to his wife.

Jackson, who shares the stage in “The Piano Lesson” with John David Washington and Danielle Brooks, laments that people don’t applaud when you’re making movies and television.

“Grips and [assistant director’s] don’t care,” Jackson jokes. “They just want to know how many more takes you are going to do.”

Spotlighting a wider array of talent

Broadway is making strides to improve diversity and inclusion efforts. “Communication is paramount. We’re always looking to hear what the room has to say,” says Crystal Lucas-Perry, who plays John Adams in the revival of “1776.” “It creates better work.”

“Ain’t No Mo” playwright Jordan E. Cooper says those initiatives also include the need to foster a safe and welcoming space as actors and other new talent grow to prominence in the community.

“Theater asks you to give 145% of yourself,” he says. “In order to do that, you have to feel safe. We’re making sure that we’re taking care of ourselves. That’s a big shift that we’ve taken as as a community, to look at the introspection of our own mental health.”

Even veteran actors continue to fine-tune their craft

Yes, seasoned performers like Jackson still need a few takes to perfect the art of live theater. In reference to one “innocuous line in the play” — his words — he struggled to capture the tone. “I tried to whimsically, I tried it deeply, I still don’t know what it means.”

Richardson Jackson fired back: “I did tell him what I thought it meant.”

It’s one of the several notes that, as a director, she’s been forced to relay to her husband at work.

“He doesn’t suffer fools,” she says. “You gotta do your homework. You really need to know what you’re talking about.” Sometimes, when her spouse was hesitant to take a note, she had to lay down the law and say, “I’m telling you that this is a better choice.”

A changing audience for changing times

Lee Daniels, a producer on the new show “Ain’t No Mo,'” wants his relatives to have a desire to go to Broadway.

“Theater is not meant for Black people,” Daniels said on the Broadway Producers Panel, moderated by Erik Piecuch from City National Bank. “Unless you want to see Denzel [Washington] or Viola [Davis] cry, or Sam Jackson. It’s not meant for my nephews. We have to find our space.”

Tony-winner LaChanze, a producer on “Kimberly Akimbo” and “Topdog/ Underdog,” says carving out that room is necessary to bring new audiences to theater. “The future of Broadway demands inclusivity. We need representation.”

“I’m so thrilled to be part of the producing team of “Topdog/ Underdog” because Yahya Abdul-Mateen II and Corey Hawkins are the most powerful dynamic Black young actors in the business,” she says. “When you see the show, for a moment, you forget you’re watching two Black men. You’re watching two brothers.”

People are ready to be back in theaters

After a long hiatus, performers have been feeling the love from eager audience members.

“People are so thrilled to be back in the space of live theater,” says Lucas-Perry. Chris Wood, who stars in “Almost Famous,” agrees. “There’s nothing like that electricity, whether you’re on stage or not. It’s otherworldly.”

For many people in the crowd, it’s the first time in quite a while that they’ve been able to socialize in public.