Will Smith Walks First Red Carpet Post-Oscars, Says ‘Emancipation’ Unlocked ‘Empathy and Gratitude That I Get to Live in This Time’ 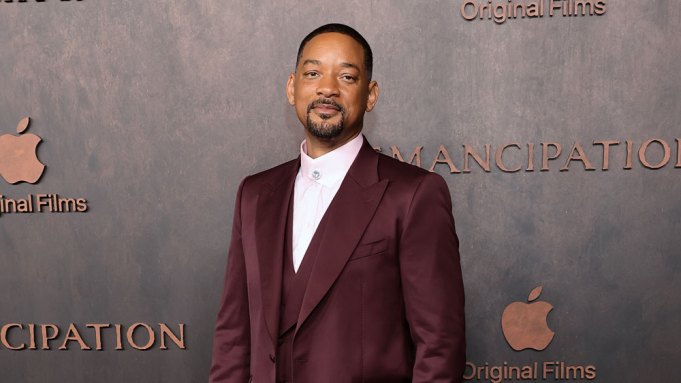 Will Smith’s press tour for “Emancipation” continued on Wednesday night as the actor made his first red carpet appearance following the 2022 Oscars.

Smith arrived at the Regency Village Theatre in Westwood with his family — wife Jada Pinkett Smith and children Trey, Willow and Jaden — by his side. As photographers called for him to look this way and that, Smith was jovial and more than prepared to face a throng of reporters for the first time since the fallout from slapping Chris Rock during the Academy Awards.

Smith already had a few interviews under his belt, including his trip to Trevor Noah’s “The Daily Show” and a virtual interview with Fox 5 DC’s Kevin McCarthy, where he directly addressed his actions at the Oscars and his public perception since. “That was a horrific night, as you can imagine,” he told Noah. “There’s many nuances and complexities to it. But at the end of the day, I just — I lost it, you know? That is not who I want to be.” To McCarthy, Smith said he would “respect” audiences’ decisions to not watch this film if they believe it was too soon: “I completely understand that if…someone is not ready, I would absolutely respect that and allow them their space to not be ready…My deepest hope is that my actions don’t penalize my team.”

Smith stars in “Emancipation” as Peter, an enslaved man etched into history thanks to a 1863 photograph known as “The Scourged Back,” which showed the keloid scars from a lifetime of whippings. The images, taken during a Union Army medical examination and published in Harper’s Weekly, are credited with contributing to the public opposition to slavery, and “Emancipation,” directed by Antoine Fuqua, aims to bring further humanity to his story by illustrating Peter’s harrowing escape through the swamps of Louisiana to get to freedom and his fight to get back to his family.

To recreate that image, prosthetic scars were applied to Smith’s back and, on the carpet, the actor described them as “the illustration of the cruelty that humans can commit against one another.”

“When you see those scars on Peter’s back, it’s like, like, ‘How? How could you? How could you even bring yourself to do that to another human?'” Smith told Variety. “That’s not one beating. That’s a lifetime of scar tissue on his back,” Smith said. “I think having to look at that, having to experience it, for an audience, my hope is that it will unlock a compassion in the in the hearts of the viewers that will help us to potentially avert similar tragedies of the past in present day.”

Explaining how the experience affected him directly, Smith added: “It’s certainly unlocked an empathy and a gratitude that I get to live in this time. And a gratitude for the people who went before me and before us, to take beatings, so I can stand here today.”

Smith was joined at the premiere by a vast majority of that team, including his co-stars Ben Foster and Charmaine Bingwa, who introduced the premiere screening with Smith.

“This project was an absolute monster of a biblical film to make,” Smith told the crowd. “First and foremost, I would like to thank my spectacular cast here. … The work that Charmaine and Ben (did), not only is spectacular in the film, but they changed me as an actor and elevated me as a human in the time that we spent together.”

Director Antoine Fuqua was unable to attend the premiere, instead beaming in from Italy, where he’s filming “The Equalizer 3′ with Denzel Washington. Fuqua explained what motivated him throughout the challenging shoot — which endured a location change from Georgia to Louisiana following the state’s voter suppression controversy, a shutdown due to Hurricane Ida, COVID and more.

“I knew it was going to take everything we’ve got and then some to get it done,” Fuqua told the crowd. “There was something spiritually moving about the film, just reading it off the page — about love, about faith, about family, about freedom. It just had to be done.”

After winning the best actor Oscar last year for “King Richard,” Smith’s name is again in the Oscar conversation as “Emancipation” has been garnering Oscar buzz — Variety Senior Awards Editor Clayton Davis wrote that the film’s “piercing honesty and careful craftsmanship are the crowning achievement of Fuqua’s long career.” But, if the film gets nominated, Smith, who is also a producer on the project, would not be able to attend the ceremony.

Mone added: “Whether he’s there in person or not, he’s going to be a permanent part of this movie. … We’re a family and where one of us goes, we all go.”

In addition to the Smith family, a number of the Oscar winner’s friends showed up to support him at the premiere, including Tiffany Haddish, Draymond Green and filmmaker Deon Taylor, who was among the first to see “Emancipation” during a private screening Smith hosted in October.

About supporting Smith during this turbulent year, Taylor remarked: “We all fall. This is a crazy time in life where, for some reason, people feel like when you fall down, you’re not supposed to get up. As a brother, we’re supposed to lift that man up, make sure we dust him off.”

“Emancipation” premieres in select theaters on Friday, and begins streaming globally on Apple TV+ on December 9.