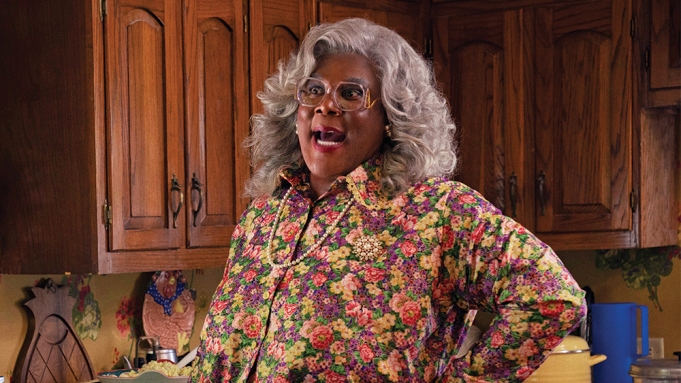 Tyler Perry’s previous Madea movies have raked in more than $600 million at the box office. But a theatrical debut for “A Madea Homecoming,” which launches Feb. 25 on Netflix, was never part of his conversation with the company.

“I didn’t even think about it. They’re a streaming service, and I understand the importance of making content in support of that,” Perry tells Variety, noting that he released “Madea’s Farewell Play,” a filmed version of the stage show, on BET Plus when launching the streamer with ViacomCBS in 2019.

Despite skipping the megaplex this time, Perry is still a believer in the theatrical experience.

“There will be some slight changes or some erosion, but some movies and experiences are meant to be enjoyed in a room full of people on a huge screen, and not on the computer or television,” he says. “My hope is that theaters and theater chains continue to thrive and be all that they have been for me, my generation and generations before me. I do worry for this upcoming generation — will it still be there? But I intend to do my part to make sure theatrical releases still happen.”

Perry has built a billion dollar media empire since he started performing as Mabel “Madea” Simmons in the 1999 play “I Can Do Bad All by Myself.” He said goodbye to the foul-mouthed, gun-toting grandma in 2019 with “A Madea Family Funeral,” his last Lionsgate theatrical release, and then her sold-out cross-country “Farewell Tour,” but he couldn’t quit Madea for long.

Perry first teased the news of the character’s revival to Variety in fall 2020. Last June, cameras started rolling on the revival at his Tyler Perry Studios in Atlanta.

“A Madea Homecoming” follows the family drama that erupts at Madea’s great-grandson’s college graduation. The script updates the “Farewell Play” story, with a fresh take on current sociopolitical issues; it touches on the Black Lives Matter movement and the COVID-19 pandemic, and there’s an arc where a lead character comes out to the family.

“I just want people to laugh and relax,” Perry says, explaining why he brought Madea out of retirement. “But what I didn’t want to do is take on any of these major, serious things that are plaguing us and dividing us and poke fun at them. What I wanted to do was raise thought about all of them.”

Perry emphasizes the importance of the LGBTQ storyline, referencing his work with the Covenant House, an organization that helps homeless children and teens, many of whom were kicked out of their homes due to their sexuality.

“In the Black culture especially — we’ve gotten a lot better — but someone in the family coming out or being gay was so taboo,” he says. “To have a character come out and be embraced and loved by the family, it sends a powerful message.”

“Homecoming” also marks the next chapter in Perry’s Netflix era, clocking in between 2020’s “A Fall From Grace” (which attracted a reported 26 million viewers in its first week) and “A Jazzman’s Blues” (the filmmaker’s longtime passion project, which wrapped production late last year). He also starred in the streamer’s best picture Oscar contender “Don’t Look Up,” from filmmaker Adam McKay. Perry says that seeing the diversity in Netflix’s boardroom motivated him to work with the company.

“I’m not someone who changes partners much; that’s why I was with Lionsgate for so very long,” he notes. “But when I do make a change, I need to make sure that it’s somebody that I’m going to really be able to work with.”

To promote Madea’s Netflix debut, Perry crafted the marketing campaign himself, spoofing Adele and Oprah’s exclusive interview, Beyoncé’s “Homecoming” documentary (which was another major coup for the streamer) and turning “The Crown” into “The Frown.” His latest ad features Madea, Mr. Brown (David Mann) and Mrs. Brown (Brendan O’Carroll) donning their finest frocks for “Madeagerton,” riffing on the Netflix’s mega-hit series “Bridgerton.”

All the gags were approved by the stars before they hit the internet, he adds. “Every time I’ve sent it to any of them, they all fell out laughing.”

Those are the type of “full-throated belly laughs” Perry is hoping the Madea movie will evoke. In addition to Madea, all the usual suspects return — including Cora (Tamela Mann), Mr. Brown (David Mann), Aunt Bam (Cassi Davis Patton) and Joe (also played by Perry) — but the ensemble gains a new member in Irish comic Brendan O’Carroll and his famous character Mrs. Brown.

Perry was first introduced to the actor and his cross-dressed matriarch while working on the 2016 movie “Brain on Fire,” when director Gerard Barrett sent him some clips of the comedy bit. Perry was wowed by O’Carroll’s work and the massive fan base he’s amassed.

“Then I looked at Brendan’s history, and our lives were on parallel tracks in different parts of the world, with him doing live plays and then going into television too,” Perry explains. “So, I thought these two worlds colliding would be amazing.”

When Madea and Mrs. Brown came face to face for the first time, they felt “like sisters from different worlds.”

That’s the real beauty of Madea, Perry believes. While the character was born of the Black experience, her place in the family structure isn’t defined by race or ethnicity. “I have Jewish friends who have a Jewish Madea in their family. My Latinx friends have a Madea in their family,” he observes. “Whatever race or ethnicity the family is, you can find another version.”

One of his favorite scenes with O’Carroll denotes one of the movie’s central themes.

“We’re talking about children — how we may have a dream and a hope for them, but we have to let our kids live their own lives, as much as that may pain us. Let them go in their own direction,” Perry says. “That for me is one of the most powerful lessons, as well as understanding that parents are not perfect.”

Perry’s movies have always had a “message” of sorts, and there’s a notable thread between “A Madea Homecoming” and McKay’s “Don’t Look Up.” While the former is a broad and brash comedy and the latter a disaster-driven satire, both movies are focused on getting audiences to take stock of the state of our society.

“What I really loved about Adam’s script is it just rips the fabric off of all of the foolishness that we get into and what doesn’t matter, and how important it is that we take a moment to focus on what is real,” Perry comments. “To actually look up from our phones and our tablets and see people and souls, and humanity.“

Later this year comes “A Jazzman’s Blues,” starring Joshua Boone and Solea Pfeiffer, the adaptation of Perry’s first screenplay, written in 1995. The film unravels 40 years of secrets and lies in a tale of forbidden love and family drama soundtracked by juke joint blues in the deep South. Perry has shared the finished project with some of his closest confidants (and some of his harshest critics) and teases that it’s unlike anything he’s done before.

“I cannot wait for people to see it. It’s really going to blow some minds,” he says. “I was the happiest I’ve ever been on any set in my entire life every day.”

The lingering question is, what’s next? Perry is developing the Showtime prequel series “Mabel” with creators JaNeika and JaSheika James, which will feature a young actor playing the character in 1970s Atlanta. But will his Madea rise again?

“I don’t know. I’ve said no before,” Perry shares with some hesitation, suggesting that maybe he’ll just let Madea “fade away quietly” this time.

“We’ll see what happens. It’s going to depend on what happens in the world,” he continues, making a soft pitch for a stand-alone movie for Madea’s older brother Joe. “I think it’s time for ‘Joe Takes Vegas,’ because that guy’s out of control.”