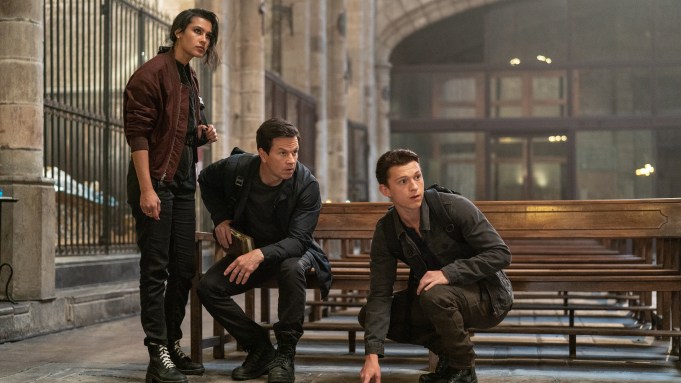 Tom Holland is no stranger to stunt-work, with six movies as the Marvel hero Spider-Man under his belt.

And now, there’s “Uncharted.” He plays young treasure hunter Nathan Drake in Sony’s feature film adaptation of the PlayStation video game series of the same name. The actor spent his time on set getting hit by cars and vaulting over bannisters and railings. During one particularly intense chase scene shot in Barcelona, he was left with a black-and-blue hip after smashing into and cracking some roof tiles.

“I walked away from every stunt, but I definitely limped from a few,” Holland told Variety, adding, “It looked great in the film, so I was happy to take the pounding.”

Tati Gabrielle, who plays mercenary Jo Braddock in the film, said she suffered her most painful injury during a fight scene between her and Holland. She ended up with a dislocated shoulder.

“It didn’t hurt at first,” Gabrielle said. “Two hours later, I was like, ‘Oh wow, my shoulder hurts, I can’t really lift it.’ By that night I was in excruciating pain, could not move or lift my shoulder at all.”

She sought treatment from co-star Mark Wahlberg’s on-set doctor. “He feels around and he’s like, ‘Oh babe, you dislocated your shoulder,'” Gabrielle recalled.

Like Holland, Sophia Ali, who plays treasure hunter Chloe Frazer, went home with nasty hip bruising. During a chase sequence where she ran across a wet fountain, Ali slipped and ended up with a large bruise that covered almost the entirety of her hip. “It looked like raw hamburger meat,” she said.

Wahlberg, who plays treasure hunter Sully, said he was grateful that he didn’t have to do as much stunt work as his younger castmates. His most notable stunt is a scene where he gets mercilessly beaten by Gabrielle’s character during a fight in a Papa John’s pizzeria.

“The biggest injury was my ego,” Wahlberg said, adding that him and Gabrielle “became fast friends before we even started shooting, we got to spend quite a bit of time together. She was probably my favorite to work with in the film. But she’s the real deal, so you had to be very careful when shooting those scenes.”