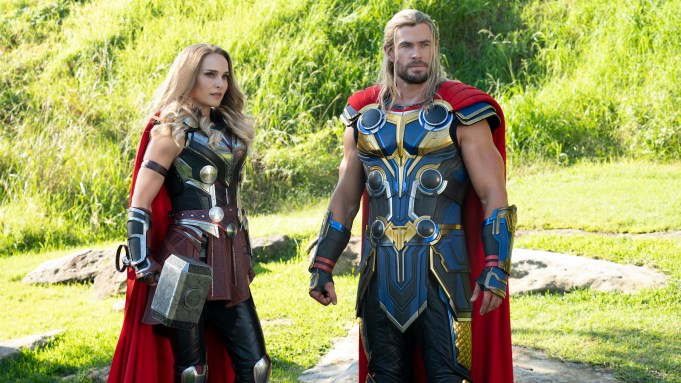 Get ready for more Marvel mania.

Disney’s “Thor: Love and Thunder,” the fourth standalone story about Chris Hemsworth’s hulking God of Thunder and the second (of three) Marvel movies to play in theaters in 2022, is gearing up to turbocharge the domestic box office. The nth sequel in the sprawling MCU is expected to bring in anywhere from $145 million to $155 million over the weekend, with some estimates reaching as high as $170 million. The film debuts on Friday in 4,300 North American theaters.

Those ticket sales should guarantee that “Thor: Love and Thunder” enjoys one of the biggest opening weekends of the year, ranking above “The Batman” ($134 million debut) and somewhere in between “Jurassic World: Dominion” ($145 million debut) and “Doctor Strange in the Multiverse of Madness” ($185 million debut). Based on initial projections, “Thor 4” will also represent a sizable jump on the results of its predecessor, 2017’s beloved action-comedy “Thor: Ragnarok,” which opened to $123 million in North America. The third “Thor” movie ended its box office run with $315 million domestically and $853 million worldwide.

At the international box office, “Love and Thunder” is on track to earn $140 million to $150 million as it opens in most major overseas markets aside from China, Russia and France.

For Disney’s MCU, a debut of $150 million or more would be a strong result. That’s because although Thor is a fan favorite at this point, the quirky superhero adventure doesn’t have the multiversal appeal that fueled the massive turnout for “Doctor Strange in the Multiverse of Madness” or “Spider-Man: No Way Home.” The Guardians of the Galaxy briefly appear in “Love and Thunder,” but “Thor 4” is basically all Thor all the time. That being said, Hemsworth isn’t the only Norse god who can summon a Mjölnir. In this flick, Natalie Portman, returning to the series as astrophysicist Jane Foster, has gained her own superpowers to become the Mighty Thor. Together, this hammer-wielding duo embark on a journey to defeat Gorr the God Butcher (a terrifying Christian Bale), a galactic villain whose name sheds light on his mission to arrange the extinction of all things divine.

Critics were mostly impressed with “Thor: Love and Thunder,” which was directed by “Ragnarok” filmmaker and Kiwi favorite Taika Waititi. Variety’s Owen Gleiberman was among the more enthusiastic reviewers, praising the film for its “pleasing, let’s-try-it-on-and-shoot-the-works effervescence.”

“‘Thor: Love and Thunder’ is far from standard, and that’s a good thing,” Gleiberman wrote. “…It builds on the earlier film’s highly winning tone of skewed flippancy.”

As the only new nationwide release, the Marvel movie looks to continue Hollywood’s stellar summer at the box office, which has fielded plenty of hits including “Minions: The Rise of Gru,” “Jurassic World: Dominion” and, of course, “Top Gun: Maverick.”